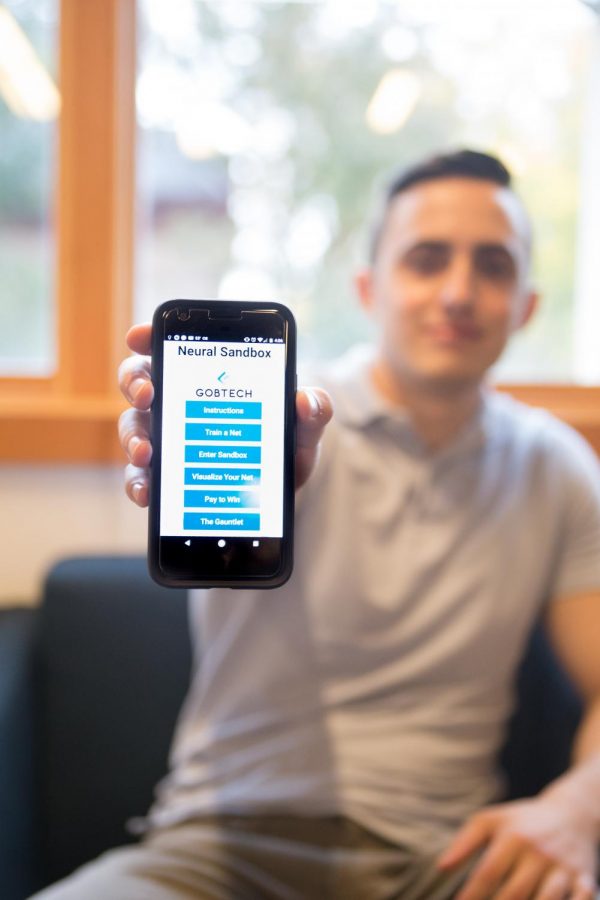 Gabriel Kauffman, last year’s winner of The Next Great Startup, displays the phone app he created called “Neural Sandbox”, which gives the user the power to customize a neural network to play a game.

The Oregon State University Advantage Accelerator hosts a yearly competition called The Next Great Startup which gives students a chance to pitch a business, product or idea and compete for prizes here on campus while gaining invaluable skills and knowledge that can be used throughout their lives.

The competition was created for OSU students who have a drive to create a startup, as well as  those who want to build off of the one they have already been working on.

“It is an attempt at a university-wide competition for students to get started in entrepreneurship and working on leading their own concept potentially into a business,” Anissa Goss, administrator of The Next Great Startup, said.

The Next Great Startup begins in winter term, according to Goss. Competitors have the potential to expand their network, receive feedback from business leaders and win prizes.

“We’re looking for those entrepreneurs with the ability to execute an idea and something very realistic that can make an impact on society,” said Mark Lieberman, director of the OSU Advantage Accelerator which runs The Next Great Startup competition.

This is more than just a pitch; students work with experts to grow their ideas into something real, according to Lieberman.

“One of the main attractions is that the students are coached by venture capitalists,” Lieberman said.

To move forward in the competition, the competitors go through a process similar to singers auditioning for The Voice, according to Lieberman. They pitch their startup to four venture capitalists who then independently choose whether they want to work with the student or not.

“(Coaches) pick who they want to work with, and if more than one coach wants someone, then it becomes a reverse pitch,” Lieberman said.

In a reverse pitch, the coaches get a chance to say why they want to work with the student, and then the student picks which coach they think will benefit their startup the most, according to Lieberman.

Starting in the fall this year, there is a college competition that is separate from The university-wide Next Startup competition starting in January, according to Lieberman. the College of Public Health, College of Business, College of Engineering and the Honors College are just a few colleges that partake in the competition. This competition is optional, but gives those who want to compete in the winter a head start at building and refining their work.

“We thought that getting an earlier jump, allowing the colleges to have their own competitions, would garner a greater interest than ever before, and greater excitement among the students,” Lieberman said.

According to Goss, students can use the college competition to prepare for the main competition.

“The way it’s designed is that there are different deliverables, different focuses trying to get people a little bit ahead if you are willing to go through the extra work,” Goss said.

A trend that many concepts follow is that they are technology-related, according to Goss. The program is looking for a variety of startups that are not necessarily related to math and science.

“A lot of people get the idea that unless they have a very technology-based or software-specific startup idea that they don’t have a startup, which is not true,” Goss said.

According to Lieberman, coming up with a startup is a skill to be learned and no one should be deterred because they do not have experience. These startup competitions are more than just competitions; they are teaching students skills that employers seek, and are setting students up for success after they graduate.

“It’s about how you can make an impact on the world,” Lieberman said. “Implementing an idea takes time and effort and the winning teams will be the one who put in the most effort.”

Gabriel Kauffman, CEO of GobTech, was last year’s winner of The Next Great Startup Competition. Kauffman created an app called Neural Sandbox as a hobby and was able to prove that he had what it took to turn it into a business.

According to Kauffman, Neural Sandbox gives the user the power to  customize a neural network to play a game. Neural networks are a form of artificial intelligence based off of a biological brain.  The app gives people a chance to experiment with this type of technology without having a computer science background.

“I really appreciated the contest and that it gives you the opportunity to go all in on your idea,” Kauffman said. “If you actually want to start a startup and then you devote all of your free time and energy and efforts to that, then you will succeed.”