Beavers head south to take on No. 14 USC 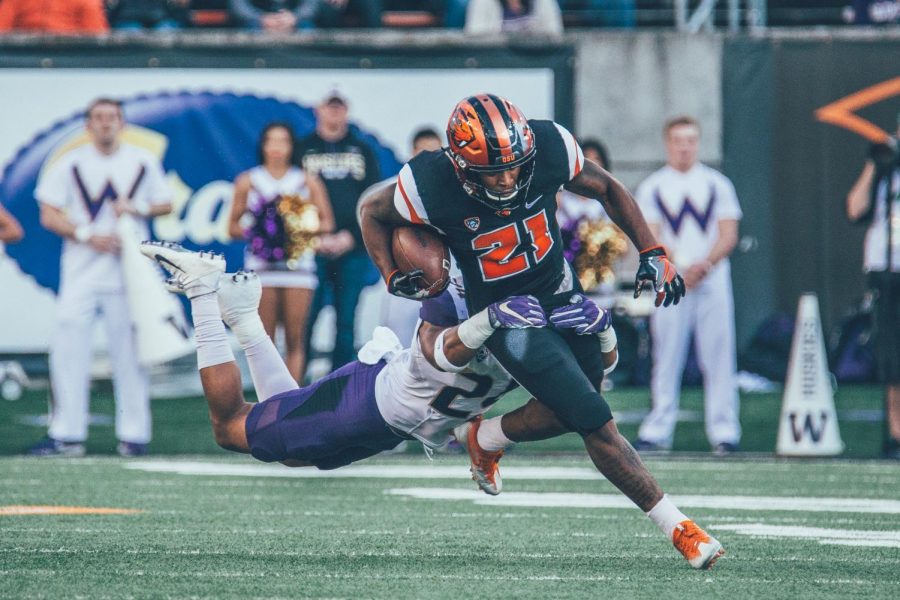 Sophomore running back Artavis Pierce breaks a tackle as he runs for one of the few big gains that OSU had on Saturday night.

The last time the Beavers won in the Los Angeles Memorial Coliseum, they were the Oregon State College Beavers. That was 57 years ago.

Oregon State (1-4) is coming off a home loss to No.6 Washington, while USC (4-1) dropped to No.14 in the polls after a road loss to Washington State. The Beavers have lost two straight to the Trojans, their latest win coming in 2010.

The Coliseum has not been friendly to the Beavers; their last victory in the building came in 1960—Heisman Winner Terry Baker’s sophomore season. Oregon State has an all-time record of 11-61-4 against USC. The Beavers pulled upsets in 2008 and 2006, beating the No.1 and No.3 ranked USC teams.

“I’m preparing for them like any other team,” said tight end Noah Togiai. “It’s still another Pac 12 football team.”

The Beavers, who are 34 point underdogs against USC, are looking to avoid their fourth straight loss.

With the game against the Trojans, the Beavers end their toughest three game stretch of the season; No.11 Washington St., No.6 Washington, and No.14 USC. They were outscored 94-30 against Washington and Washington St.

Despite the tough slate, the Beavers are coming off a solid defensive effort. They held the Huskies to seven first half points, but gave up 35 second half points. The defense is still looking for a complete game, being outscored 147-49 in the second half of games this year.

“They’ve traditionally been one of the best,” OSU defensive coordinator Kevin Clune said. According to him, USC presents offensive threats at all positions and alluded to the defensive line being an integral part of breaking the Trojans down.

The Beavers will be tasked with stopping Sam Darnold, a player projected to be a first-round pick in the next NFL draft. Darnold, who has thrown for nearly 1,400 yards and eight touchdowns, is known for his ability to scramble and create plays out of nothing.

“There’s dynamic play makers every single week, we know we’ve played against some very talented players,” said Head Coach Gary Andersen. “We’ve played well at times and haven’t played so well at times. Each week you’re going to get some next level players.”

After injuries to the offensive line, the Beavers might find some success getting to the quarterback. They have six sacks on the season, along with seven turnovers recovered.

The Trojans and Beavers both come into the game banged up. The Trojans will be missing a handful of offensive lineman and defensive players. The Beavers will be without cornerback Xavier Crawford, while running back Ryan Nall, cornerback Jay Irvine, and linebacker Kesi Ah-Hoy are all doubtful. Jake Luton is still recovering from a thoracic spine fracture.

Starting quarterback Darell Garretson said the Trojan defense is physical and long at the corner spots, but OSU still needs to play their game. Garretson will be starting his second straight game in place of Luton. He is coming off a 74-passing-yard performance, with a long of 19 yards.

“There’s things that I can do better, but I played alright,” Garretson said. “We just have to get better in all phases of the game.”

A bright spot in the game against Washington was running back Thomas Tyner’s performance. He led the team in rushing, with 54 yards and one touchdown. It was his first time getting in the end zone since playing in a 2014 College Football Playoff Semifinal game—with the University of Oregon. Tyner will likely see an increase in reps with Nall’s status for the game unclear.

“I feel good at practice every day, trying to explode during every play,” Tyner said. “I think I do that every week, and in games when I go in.”