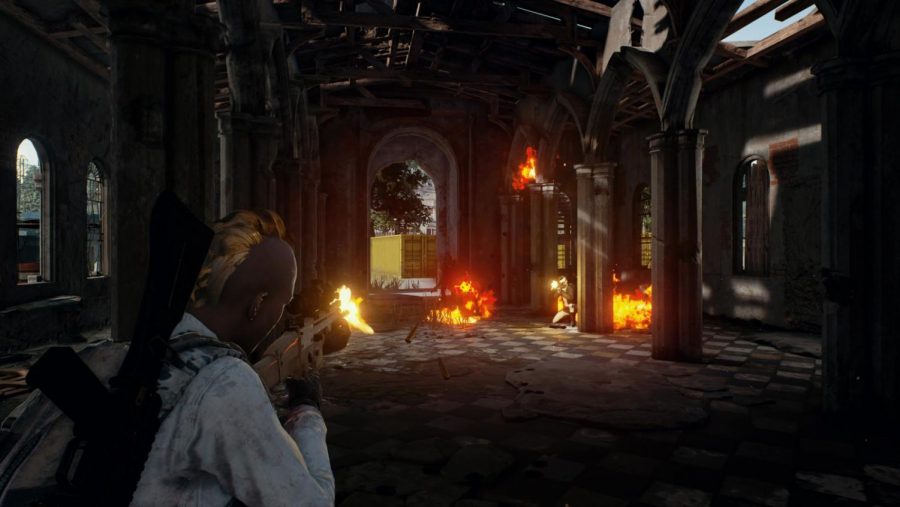 'PUBG' is based on an island while players attempt to scavenge for supplies. The video game is featured in gameplay videos on YouTube and Twitch.

Battle royale is a fight to the death where only one person remains and a well-known story arch in pop culture. The trend started when Japanese author Koushun Takami released his novel Battle Royale in 1999, which was made into a movie in 2000.

This then inspired the “Hunger Games” series, which became massively popular. In video games, however, the only notable release around battle royale was called “H1Z1: King of the Kill.” Yet that was overshadowed by the release of “PlayerUnknown’s Battlegrounds.”

“PlayerUnknown’s Battlegrounds,” better known as “PUBG,” is an arena-based battle royale game in Steam Early Access. It puts players on an island in a constantly shrinking map and forces them to scavenge for supplies and weapons, all while battling their way to the number one spot. It’s a very simple design and a very popular one as well – so popular that “PUBG” had 1,349,584 concurrent players, according to Steam’s statistics page. This is 58,256 more players than the previous record holder, “Dota 2.”

For reference, Reser Stadium has a max capacity of 45,674 people. The number of players playing “PUBG” at that time could fill about 29.5 stadiums. Moreover, the sales numbers continue to rise despite the game being in early access.

Early access means that this game is not finished. Everything people are playing right now is basically a public paid beta test. Even so, PlayerUnknown was smart to release the game in this way, and they have done well by pairing up with Microsoft to bring the game to consoles. It brings the game to a whole new market with consoles, and it also gives them the ability to collaborate with other Microsoft-owned studios.

“I can’t wait to see what happens when ‘PUBG’ hits consoles,” Nick Allmeyer, senior, said. “I hope it will eventually come to PS4 because that’s the console I play on, but it will bring the game to new audiences.”

“PUBG” seems to have taken the world by storm. Gameplay videos are all over YouTube, and Twitch streamers are loving the game as well. It seems to be an overall success, in part because of the community that has developed around this game and these videos.

“Even though I’m not huge in the shooting department, I still enjoy ‘PUBG’ a lot more because a couple of my friends are playing,” Logan Saso, president of the Gaming Club, said.

Shane Clancy, sophomore, also plays “PUBG.” “I got into ‘PUBG’ when it first released by watching a few streams and then getting some friends to buy it with me,” Clancy said. “I keep playing because there are constant updates that make the game stay fresh and different.”

There is never a week that goes by without hearing about it in the news. There are weekly updates fixing everything from the direction that cars are facing to adding costumes to the “Battle Royale” movie, and they are all big deals to the people who play.

Personally, I want to see where “PUBG” goes when it gets to consoles. This console generation is being defined by games such as this. “The Division,” “Overwatch,” “Destiny 2” and many more have done amazing on consoles, but nothing has nailed battle royale gameplay like “PUBG.” I want to see if Sony will get PlayerUnknown to bring it to PlayStation, but like most unknown elements in gaming, we will just have to wait and see.

If you have played “PlayerUnknown’s Battlegrounds,” what do you think? Is this the generation-defining game? Let me know what you think and shoot me an email at [email protected] Remember to send me anything you want to see covered as well. Until next time, excelsior.