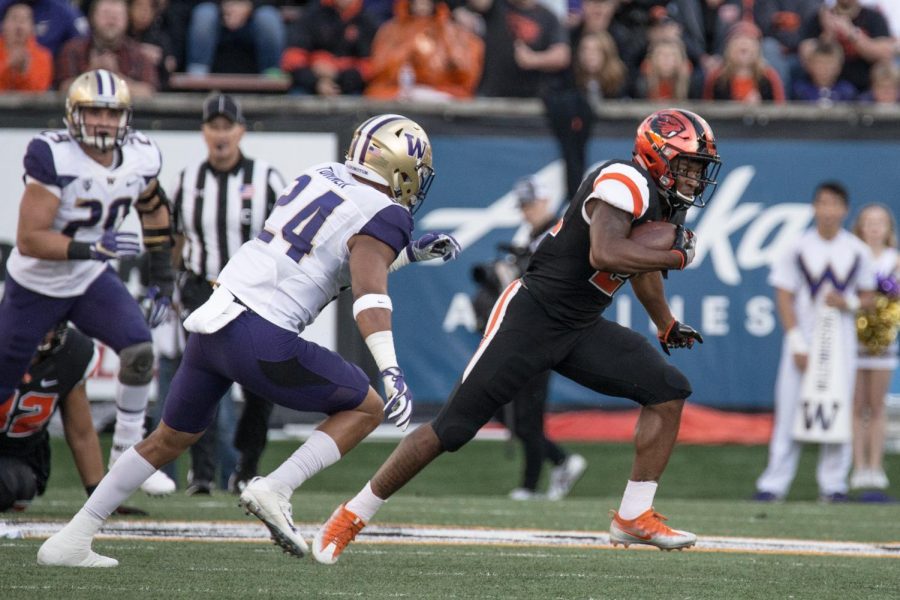 It was all too familiar for the Beaver football team this weekend.

Starting the game off, it was just like Washington the week before, USC methodically moved the ball down the field. It took the Trojan offense eight plays to go 76 yards, capping the opening drive off with a 37-yard touchdown pass.

Down 7-0, the Oregon State offense needed to find some success. Instead, quarterback Darell Garretson threw an interception on his first pass attempt of the game. The USC offense punched the ball into the end zone three plays later, and the Trojans never looked back.

Despite three early turnovers by USC, the Beavers could not capitalize.

Oregon State (1-5) couldn’t make USC (5-1) pay for their mistakes. The Trojans fumbled twice in their own red zone, but the Beavers came away empty handed after two missed field goals. The Beavers were forced to punt after a USC interception, and a promising drive was cut short when the offense was stopped on fourth down.

With starting running back Ryan Nall injured, the Beavers spread out the carries. Artavis Pierce, Thomas Tyner, and Trevorris Johnson all saw significant reps. The Beavers finished with 122 rushing yards on 36 carries.

The Beavers found success running the ball to the outside, using fly sweeps and designed runs to stretch the USC defense. The passing game was most efficient when Garretson got the ball out quickly, avoiding sacks or dangerous throws.

The defense turned in another inspired effort, forcing a fumble and interception before half. The lack of offense translated to extended playing time for the defense, resulting in a 21-3 halftime score.

The Beavers came out in the second half looking to find the end zone. A promising 12 play, 69-yard drive was cut short by a Garretson fumble on the USC six-yard line. It wasn’t until the start of the fourth quarter when the Beavers got in the end zone—a six yard run by Pierce.

The Beavers last drive ended in a turnover on downs, and USC used the rest of the clock to finish up a 38-10 victory. USC quarterback Sam Darnold was inconsistent, but finished with 316 passing yards. USC finished with 512 yards on offense while the

Darell Garretson started slow, but finished the game with 197 passing yards on 16 completions. He turned the ball over twice, an interception and goal-line fumble.

The special teams play did not help the Beavers. Two missed field goals, a roughing the kicker penalty, and a kickoff fumble were significant setbacks.

Gary Andersen is now 7-23 at Oregon State, and is still looking for a road win. The Beavers have lost 16 consecutive away games. The last one came in 2014 at Colorado—under ex-head coach Mike Riley’s tenure.

With the loss, Oregon State finishes its string of AP ranked foes. They finished 0-3 in those games, getting outscored 132-40. The Beavers now look ahead to the homecoming game against Colorado (3-3), set to kickoffat 1 p.m. PT.