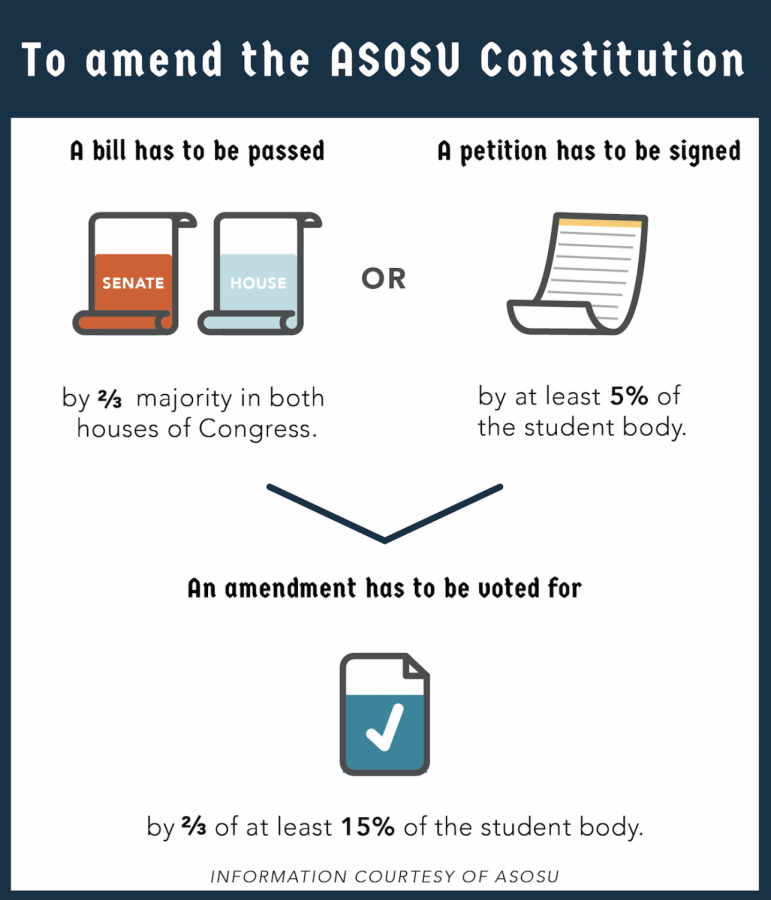 This year the Associated Students of Oregon State University is attempting to rewrite its constitution, which serves as the regulatory document for the entire student government.

The constitution was voted on in its current form in 2008, detailing the roles of the three branches: legislative, executive and judicial. Approximately every eight years, the document is rewritten as information becomes outdated or imprecise, as well as when grammatically incorrect language needs to be adjusted, according to ASOSU President Simon Brundage. This year in particular, larger changes include the reworking of the Student Incidental Fee Committee into the Student Fee Committee and a broader shift in the makeup of the Executive Cabinet.

According to ASOSU Vice President and President of the Senate, Radhika Shah, one of the issues with the current constitution is the outlining of responsibilities in the document without specifying a distinct position to carry them out.

“I would like to see someone actually being held accountable for the progress the constitution wishes ASOSU to have,” Shah said in an email. “In addition, I would like to provide longevity within the document and the organization so that it is applicable to students 10 years down the line, and not something that is disregarded.”

If the constitution is rewritten this year, the executive branch listings will not require specific Cabinet positions as student needs change from year to year, according to Brundage. For example, while the position of Executive Director for Campaign Resources has not been filled for multiple administrations, it is still listed in the document. Additionally, in the past eight years, the roles of Task Force Directors have been renamed Advocacy Coordinators. These individuals, according to the ASOSU Constitution, are part of the executive branch and include Veteran’s Affairs, Multicultural Affairs and Queer Affairs, among others.

Under the current definition, the OSU-Cascades satellite campus in Bend and the Hatfield Marine Science Center in Newport are considered part of ASOSU, according to Brundage. However, the OSU students in central Oregon have their own student government, the Associated Students of Cascades Campus, and those on the coast are in the process of creating a Leadership Council.

“Do we need to be representing them at that scale, since they already have their own representation? Right now, our constitution says we do because it says ‘every student.’ What if we changed that to ‘Every student that pays the OSU-Corvallis student fee?’ Brundage said. “That is specifically what our organization addresses—student needs based on student fees.”

According to Josh Kaufman, chair of the ASOSU Judicial Council, he too would like to update the Student Fee Committee language to reflect the group’s revised title. Additionally, Kaufman would like to see his own branch described in more detail, especially regarding the scope of the JC’s subsidiary courts.

“My hope is that it will allow the government to function better and with less confusion for the student leaders who come after us,” Kaufman said via email.

The proposed changes will largely be focused on ensuring the productivity of internal ASOSU functions, according to Shah.

“I do not see these changes drastically impacting students in any way,” Shah said in an email.

Students can share their thoughts on what changes should be included by attending Senate meetings, which are held on Tuesdays at 7 p.m. in MU 109, according to Shah. She also encourages students to attend the series of town hall meetings scheduled this term to discuss the constitution publicly.

According to Brundage, the first of these town hall meetings, held on the first Thursday of each month, took place Oct. 5 and saw a lower turnout than desired. Brundage hopes to do better with more effective advertising.

In addition to the town hall meetings, the first Constitutional Convention will be held Oct. 21 in SEC 354 to produce a rough draft of the updated document, according to Brundage. This meeting, open to all students, will be attended by members of all three branches. Brundage encouraged all students to voice their opinions by showing up to the convention and the town halls.