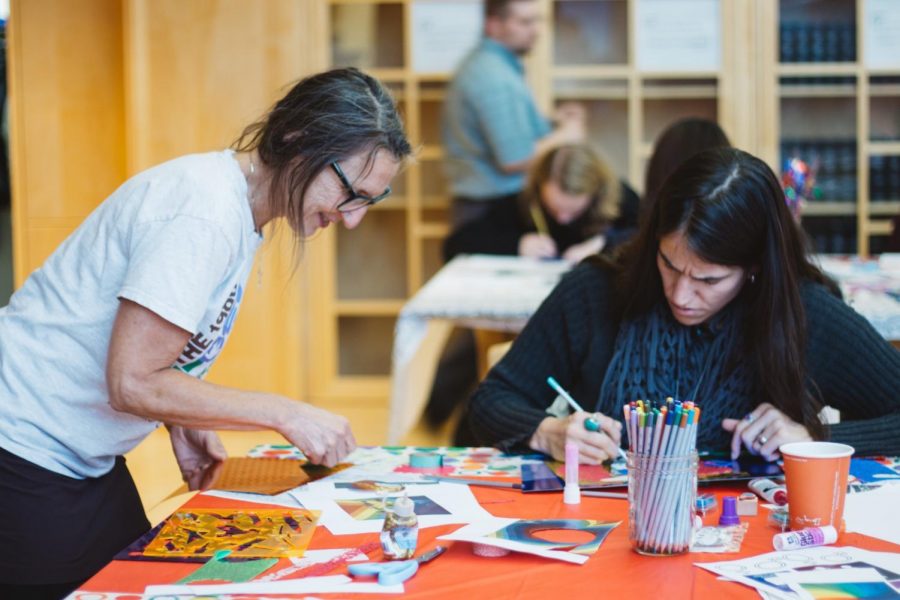 (Left) Dr. Linda Richards and (right) graduate student Caroline Melchor craft at the Glitter in the Archives event in the Special Collections and Archive Research Center. Richards works closely with SCARC, and her work with the International Campaign to Abolish Nuclear Weapons won a Nobel Peace Prize.

When Linda Richards was a teenager, her favorite book wasn’t a teen romance or true-crime thriller, but “No More War!” by Linus Pauling. Her love for this book, coupled with her dedication to activism, led her to become a part of a Nobel Peace Prize-winning organization, the International Campaign to Abolish Nuclear Weapons.

The connections between ICANW and Oregon State University run deeper than they appear at first glance. Ties exist as recent as current professors and activists who witnessed the organization’s beginnings, as far back as Linus Pauling and his contributions to the early nuclear abolition movement, and as constant as the campus’s own Special Collections and Archive Research Center.

One of the most pivotal connections between the two groups is Dr. Linda Richards of the School of History, Philosophy and Religion. Even before her career in academics, Richards built her life around advocating for peace.

“I became an activist as a nine-year-old,” Richards said. “I did small things—I put flyers on cars, I protested the Vietnam War as a child and I worked on the McGovern campaign, which very much dates me.”

According to Richards, many of her fundamental values regarding peace and nuclear weapons come from Pauling’s work. Even now, her research draws from Pauling’s collection in the SCARC.

Anne Bahde, the SCARC rare books and history of science librarian, curates the nuclear history collection there. According to Bahde, OSU has one of the largest collections on nuclear history in the nation, and Pauling’s work makes up an important portion.

In the 1980s, when Pauling was searching for a university to house his collection, OSU was in competition with other schools like Stanford and Cornell, according to Bahde. One of the major factors influencing Pauling’s choice to donate his collection to the SCARC was that OSU was the only school to also request the papers of his wife, Ava Helen. This provided the extra edge needed for Pauling to decide to donate, Bahde added.

Another feature that makes the collection special is that it is not focused on a particular side of the issue, according to Bahde. The nuclear history collection serves to represent the diverse voices across the campus and contribute to constructive dialog. Voices from on campus and around the world alike come to the SCARC to work with materials in the collection, Bahde added.

Though relationships such as that between Linus Pauling and the SCARC may link OSU to the ICANW in a broad sense, one of the deepest and most integral connections is the work of Richards. This began in 2012, when Richards was in her fifth year with the history of science Ph.D. program at OSU.

“I was working on my dissertation and, this is very coincidental, I had an NSF (National Science Foundation) grant to go to the IAEA to look at their documents, the International Atomic Energy Agency located in Vienna,” Richards said. “The time that I had blocked out to do the work in their archive was when the NPT prepcom (Non-Proliferation Treaty Preparatory Committee) was being held in 2012. I was already a part of WILPF (Women’s International League for Peace and Freedom) Disarm, they were expected to be at that meeting so I got to represent WILPF at that meeting and my research thus far.”

Dr. Sharyn Clough, Director of the Phronesis Lab at OSU, works closely with Richards. The mission of Phronesis Lab, according to the Lab website, is to apply practical wisdom (“phronesis” in Greek) to ideas like peace, social justice and civic engagement. The Lab has focused most recently on the idea of peace as a practice and skill set (peace literacy), an idea that Richards learned from Paul Chappell at the Nuclear Age Peace Foundation and shared with Clough last fall.

According to Clough, Richards was awarded a three-year grant with the National Science Foundation as well as a book contract, both of which will help her continue her work on nuclear energy, health outcomes and human rights, and so just last week she stepped down as co-director of Phronesis Lab to focus on these projects. She and Clough work closely together and continue to be committed to themes of practical wisdom focused on the idea of peace literacy–the idea of peace as a kind of phronesis, as a practice or skill set. They recently gave a workshop to a local community organization on peace literacy and racism.

Richards’ presence at a 2012  meeting of ICANW members was an important chance to advocate for some of the research Richards conducted at OSU, according to Clough.

“She was at the Non-Proliferation Treaty Preparation Committee meeting of ICAN members in Vienna in 2012, where she helped advocate for recognition in the Treaty of the harms to indigenous people through the nuclear fuel chain—a recognition that was eventually articulated in the preamble to the Treaty,” Clough said via email.

This ability to travel abroad and share her research opened another door for Richards to become more involved with the ICANW. According to Richards, her work with the rights of indigenous people began in 1986 when she had the opportunity to meet with elders of the Hopi, Pueblo, and Dine (Navajo) people. After meeting with them and hearing their stories of the impact of nuclear technology–especially uranium mining–on their land and their people, Richards made a vow to tell their story.

“When the actual nuclear ban treaty that was passed July 7 came out, in the preamble it says: ‘Due to the disproportionate exposure of indigenous people we think of nuclear weapons as an infringement of human rights,’” Richards said. “I was one of many people concerned about this, but I had made a little contribution.”

According to Richards, the concept that many people all contributing and working together can create a great end product, is integral to the nuclear disarmament movement as a whole.  ICANW is an organization made of hundreds of smaller organizations.

“This award for ICANW is really an award for everyone who has been working for getting rid of war and creating justice,” Richards said. “It’s really an award that spans out into a people power kind of award because so many organizations, with so many people working, each doing their own little part.”