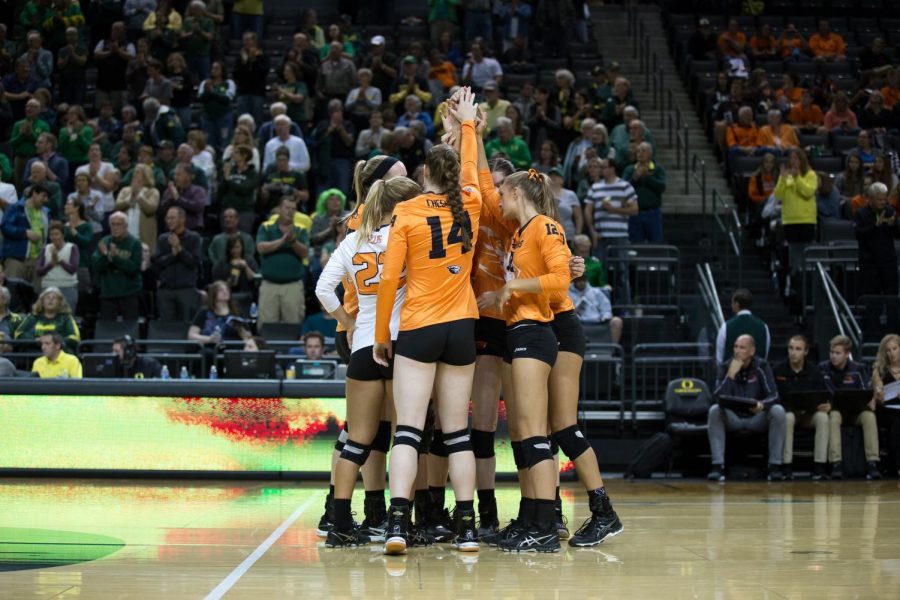 The OSU volleyball team in a pre-game huddle in an earlier match up against rival University of Oregon. OSU has won their past four conference match ups.

The OSU volleyball team’s five-game win streak came to an end on Oct. 28 as the Beavers fell to Colorado in four sets. Oregon’s state streak, the longest string of conference wins the team has had since 1990, helped lift the Beavers from the basement of the Pac-12 and post season hopes alive.

Senior outside hitter Mary-Kate Marshall continues to shine both on and off the court. She has led the team in kills 22 out of 24 games this season, has been named the Pac-12 offensive player of the week three times this year, and has been announced as a Senior CLASS Award for her leadership in the classroom and community.

The Beavers concluded their regular-season road schedule with a trip to Southern California. Following a 5-0 loss to UCLA, the team was to rebound against San Diego State and won 4-2.

Senior Jordan Jones and junior Don Tchilao lead the team with four goals a piece. Senior Timmy Mueller has had a relatively quiet season statistically, recording only one goal and two assists on the year. Freshman Gabe Rogers and junior Ryan Vincent have shared the majority of the workload at keeper this season, and have a 1.41 and 1.43 goal against average each respectively. The team will play their final game of the season on Nov. 9 against Washington in Corvallis.

Sitting second-to-last place in the Pac-12, the OSU women’s soccer team’s season has not gone as planned. With two conference wins, the team has one game left this season to improve upon this statistic.

A bright spot from this season has been goalkeeper Bella Geist. Geist now holds the OSU record for most career saves, and currently sits at 97 saves this season, as well as 394 in her career.

Forward Emma Jones leads the team with two goals and an assist on the season.

After defeating Utah 2-1 on Oct. 29, The team will finish out the season with a matchup against Oregon on Nov. 2. The game will be played in Corvallis.

Despite close games against Colorado and No. 20 Stanford, the OSU football team remains without a conference win this season, and has not won since beating Portland State at the beginning of the season.

Although the team has been cloaked in adversity much of the season—losing their starting quarterback to injury and then losing their head coach to resignation—the program seems to have rebounded mentally under the lead of interim head coach Cory Hall.

Running back Ryan Nall leads the team in rushing and has 597 yards on the year with seven touchdowns. Quarterback Darell Garretson, who replaced Jake Luton, has 706 yards over six games played and has thrown one touchdown, while running for two more.

The team will finish out the season with road trips to Cal, Arizona and Oregon, as well as one more home game against Arizona State.