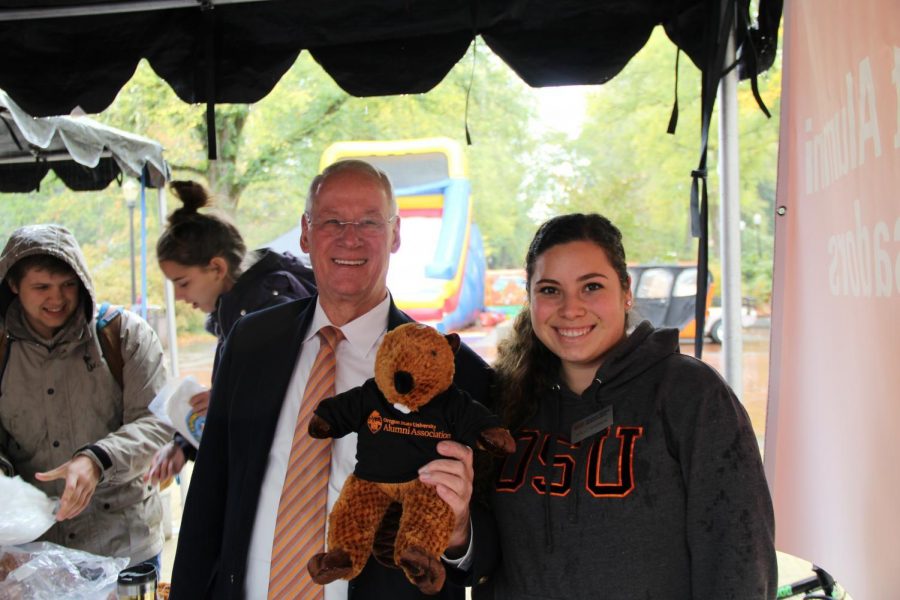 OSU President Ed Ray made an appearance at the Homecoming Carnival.

Walking near the quad this last Thursday sounds of laughter and music filled the air. A carnival had appeared overnight in the SEC plaza.

The Oregon State Homecoming Carnival once again hit campus last week. The SEC plaza was home to the carnival this year as rain forced most, if not all, activities under the shelter of the canopy. It was a host for games and people as the event went on for several hours.

The man behind the show, Matt Fenstermaker, the early engagement director for the OSU Alumni Association, made this carnival happen with the effort he put forward applying for the Pepsi grant which subsidizes the event.

“Our goal was really to try and make this a long-standing tradition that would be something here to stick and stay so that way future alumni could come back and say ‘Oh yeah I was here when the homecoming carnival happened,’” Fenstermaker said.

In addition to the students and faculty that participated in the event, OSU PResident Ed Ray and Benny the Beaver also made appearances.

“Ed Ray showed up and took the liberty of standing a lot closer (to the dart board) than he was supposed to, but that was pretty funny,” said David Rebischke, a volunteer at the event.

Fenstermaker has made it a goal to bring back more traditions such as the homecoming court in addition to the carnival.

“Homecoming dates back to the early 1900’s so there are few different traditions we have been trying to bring back such as the homecoming court,” Fenstermaker said.

This homecoming carnival was home to many games including a mini wipeout course and even a mechanical bull ride. All of these games, including freshly made kettle corn, were all free of charge. After competing in games people could win tickets in order to enter a raffle to win prizes which included OSU gear.

Along with the carnival being free to the public, Fenstermaker wanted to help give back to the OSU community and so “Build-A-Beaver” was at the event—a way to donate money in order to have the opportunity to build your very own Benny look-alike. The money that was raised will be going towards student scholarships that the OSU Alumni Association has available.

Fenstermaker hopes that with the aide of the Pepsi grant the carnival will continue to comeback for years to come—rain or shine.

“Yeah I would want to go more events like this, but probably not in the rain though,” said Tiarae Willing, an attendee.