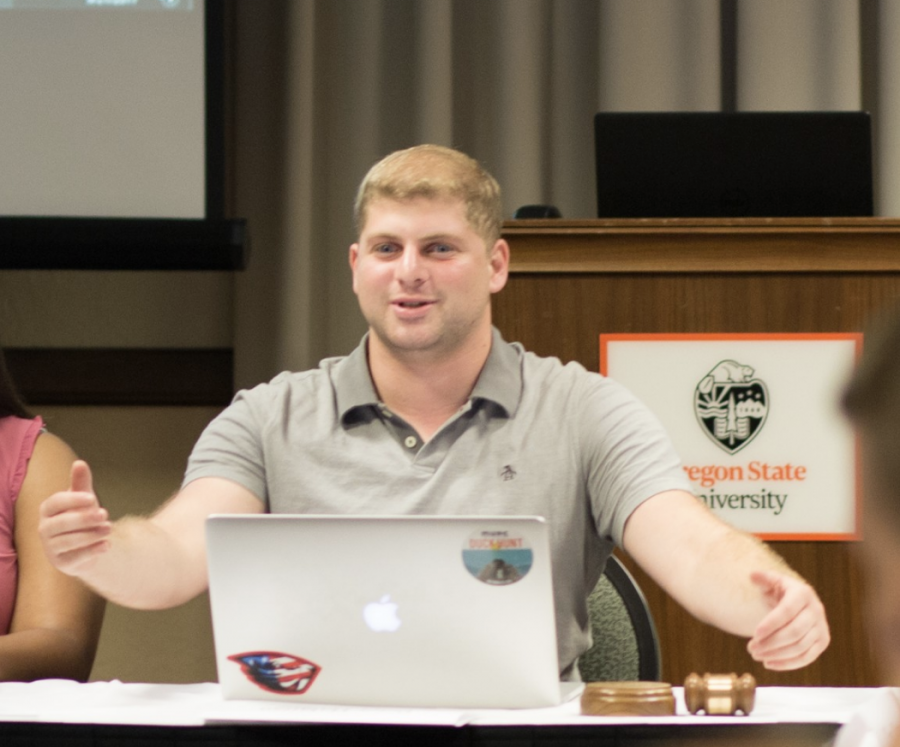 Peter Halajian is the Speaker of the House of Representatives and is serving his first year with the Associated Students of Oregon State University.

Both chambers of the legislative branch of the Associated Students of Oregon State University held sessions this week for their first fall term meetings. This arm of OSU’s student government writes bills and resolutions, and must approve over $40 million of student fees each year.

The agendas of the ASOSU House and Senate this week began with the election of pro-tempore officers to preside over meetings when the Speaker of the House or President of the Senate is unavailable.

They also saw the transition of a member from one branch to another to fill a vacant seat, as well as the introduction and unanimous passage of a Senate resolution aimed at supporting students who are part of the Deferred Action for Childhood Arrivals program. DACA was created by the Obama administration to allow individuals who entered the U.S. illegally as minors to temporarily remain in the U.S. and apply for work permits, but was rescinded by the Trump administration earlier this month.

The ASOSU Statutes explain that a resolution is a non-binding act of Congress used to express the opinions of students. The ‘Resolution to support DACA students’ was written by Sen. Logan Adams, chair of the Senate Committee on Academics and Activities, which focuses on outreach to determine which issues the student body cares about most.

According to Adams, he was prompted to write the resolution by OSU President Ed Ray’s all-university letter condemning the federal decision.

“I wanted DACA students to know that students and student leaders were supportive of them as well,” Adams said. “I also wanted that aspect of networking that ASOSU can do with other student government organizations across the state, as well as with organizations like OSA (the Oregon Student Association).”

In the text of the resolution, the Senate promises to work with the OSU administration to ensure that legal services and other resources are provided to DACA students as the October 5 deadline to re-apply for the program approaches.

“A lot of what I’d like to do is outlined in the resolution, a decent amount of that is just highlighting the resources that are available. Things like legal services, which every student is entitled to, as well as educational advising which students have a right to,” Adams said. “Another important part of the bill is just increasing outreach to DACA students as well as relevant campus organizations.”

Adams says, he wants ASOSU to work on removing stigma from students with DACA status, as well as undocumented students.

Senator Raven Waldron was a sponsor of the bill, and both Senator Waldron and Senator Aiden Tariku will be working on this issue in the coming weeks.

“We haven’t worked out the logistics of this yet, but perhaps helping students fill out some of the forms, direct them towards proper resources (such as our immigration lawyer at Student Legal Services), and maybe even raise some money to help reduce the renewal fees,” Shah said in an email.

Before the resolution was introduced and discussed, each chamber nominated and voted on pro-tempore officers from within their ranks. The newly-elected Speaker Pro-Tempore of the House is Thomas Olsen, a returning member, and the President Pro-Tempore of the Senate is Katarina Rodak, in her first year in student government.

According to Rodak, she ran to become more involved in the university community, but was unsure at first if the President Pro-Tempore position would fit in her academic workload.

“My biggest goal going forward as Senate Pro-Tempore is a unified, active and effective Senate,” Rodak said in an email. “I mentioned during our first Senate meeting about getting ASOSU members official email accounts, which I believe will greatly increase communication between students and student government, as well as within student government itself. Another goal is to update and revise student government documents such as the Constitution and the Senate Standing Rules.”

According to Peter Halajian, Speaker of the House of Representatives, the first meeting under his leadership went well.

“In spite of a few hiccups, we were able to hear a few bills that we will be revisiting later on,” Halajian said in an email. “Most importantly in my opinion is we were able to sit down as a body and information about the year was disseminated.”

One of the clarifications Halajian made was the requirement that all Representatives hold at least one office hour per week. This is a time for House members, as well as Senators, to make themselves available to meet with students and each other, according to Halajian.

The legislation in question was introduced by then-Rep. Andrew Damitio, who was in the House for this meeting only, before resigning to fill a vacancy in the Senate. Damitio lost the Senate race last spring, but according to Shah, the ASOSU Statutes prescribe that when a vacancy occurs, the person with the next highest votes can fill the seat.

According to Damitio, who served in the House last year, he chose the Senate because the body has been around several decades longer than the House, thus carrying more prestige. During his brief stint as a representative this year, Damitio introduced a joint bill designed to make it easier for members of each chamber to continue discussion after the agenda for a meeting has been completed. With fewer formal procedural rules in place, the bill would allow House or Senate ‘workgroups’ to continue to hash out legislation before other concerns pulled their focus, Damitio added.

“Eventually, you lose that opportunity to really think of some insightful legislation. And then the next morning—oh, you’ve got homework, you’ve got class, and all of a sudden life gets in the way,” Damitio said. “The moment in which life really doesn’t get in the way is the time you’ve set aside already for ASOSU.”