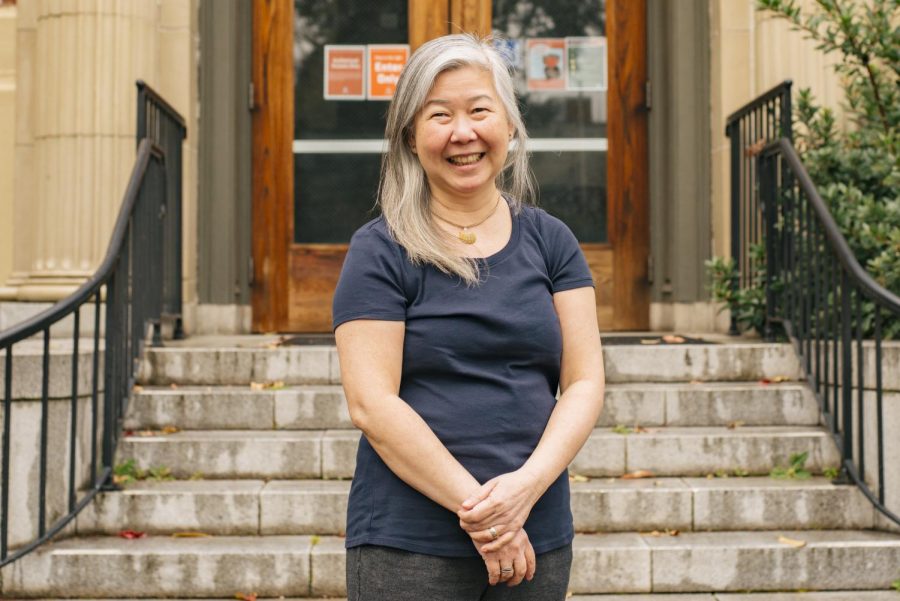 College of Engineering Senior Director of Marketing and Communications, Thuy T. Tran, poses on the OSU campus outside of Covell Hall. Originally called the Physics Building and completed in 1928, this structure was later named for Grant Adelbert Covell, first dean for the School of Engineering.

Oregon State University 1986 alumnus William Allen always had an interest in learning how things worked. Fast forward to now, he was able to play a significant part in designing the Mars 2020 Perseverance Rover.

Allen, a mechanical systems design engineer at the National Aeronautics and Space Administration’s Jet Propulsion Laboratory, oversaw the mechanical design of the whole mission of getting the rover to the red planet.

The success of the project can be attributed to many experienced professionals including Allen.

Growing up, Allen’s interest in learning about the physical world around him led him to where he is today. When it came time for Allen to pick a major for college, however, engineering was not his first choice.

“I was heavily into athletics in high school. But at some point, it became clear that wasn’t a path forward. So I had to choose and start thinking about what I wanted to do for a living so to speak,” Allen said.

According to Allen, he was behind his colleagues at first in the engineering program, who he said were, “engineering in the womb.”

“By the time I arrived at Oregon State on paper I was okay, but no, I was pretty far behind other engineering students,” Allen said.

When Allen arrived at OSU, he was impressed with the whole scene and got right to work catching up with the curriculum, such as interning for the JPL. Allen had worked the summer before his first term at OSU in the JPL’s mailroom due to a connection with his uncle.

From there, Allen was able to make contacts with various people in the engineering department and was able to come back later to fulfill a six-month-long internship.

“I took a quarter off and combined it with a summer and had a six-month internship or ‘co-op’ and that’s where I would say the real work kicked in,” Allen said.

One major influence on Allen at the time was a previous professor at California Institute of Technology, which was relevant to the JPL’s position as a “NASA owned, but Cal-tech operated,” organization.

“The relationship was already understood. When I asked to take a quarter off and do that co-op he was more than willing to help make that happen. So that’s really what enabled that,” Allen said.

Today at the JPL, Allen is the mechanical systems design lead for the NASA Mars 2020 Perseverance Rover and he and his team went through many challenges while designing the rover.

“The first challenge always is we are designing to an end game called a launch, and the launch window doesn’t move. The other challenges come from taking a set of high-level requirements and in designing and building a spacecraft that can meet those requirements,” Allen said.

According to Allen, those requirements can take a long time to resolve, as they must be vetted and tested for issues and problems that may arise. Allen said the experience was like, “fixing a car while driving it.”

With the parameters and requirements of the project constantly shifting, the team at the JPL has to keep those conditions in mind, according to Allen. JPL is looking ahead and even with the recent landing of the Perseverance rover on Mars, they are on their way towards their next project.

“By the time 2020 or Perseverance landed, we were already working the next rover. [The rover is] going to go retrieve what Perseverance is going to study and collect,” Allen said.

For students who want to pursue a career like Allen, he said one of the most important things is being a part of an internship.

“A six-month internship will give you such a good, clear vision of what it is you’re trying to pursue or something else you might be interested in pursuing. It’s so vital to get that view while still in school,” Allen said.

Scott Ashford, the kearney dean of engineering, also highlighted a few ways on campus that students can broaden their potential opportunities.

“I think a great opportunity to get involved is through our student clubs. We have a Mars rover team and a rocket club. NASA and SpaceX recruit from our programs,” Ashford said via email.

According to Ashford, Allen and him have been chatting over email and he hopes to have Allen visit the OSU campus next year. Ashford feels having OSU alumni work on projects like the Perseverance is inspiring.

“The Oregon State alumni are just out there putting their mark on the world—fighting the pandemic, rebuilding communities after wildfires and earning top recognitions in their fields,” said Thuy Tran, the senior director of marketing and communications for the OSU College of Engineering.

“There are so many alumni who went on in that direction and so many current students interested in aerospace engineering,” Tran said.

Another OSU alumnus Tran highlighted is Donald R. Pettit, who is a NASA astronaut. Since graduating, Pettit has returned to OSU several times to give lectures.

According to Allen, besides securing an internship, the number one thing OSU taught him was the value of hard work. While the engineering program was very rigorous, Allen wants to thank OSU as the same principles he learned to get through the program are also the same ones he has applied in real life.