Beaver football blown out by Minnesota Golden Gophers at home 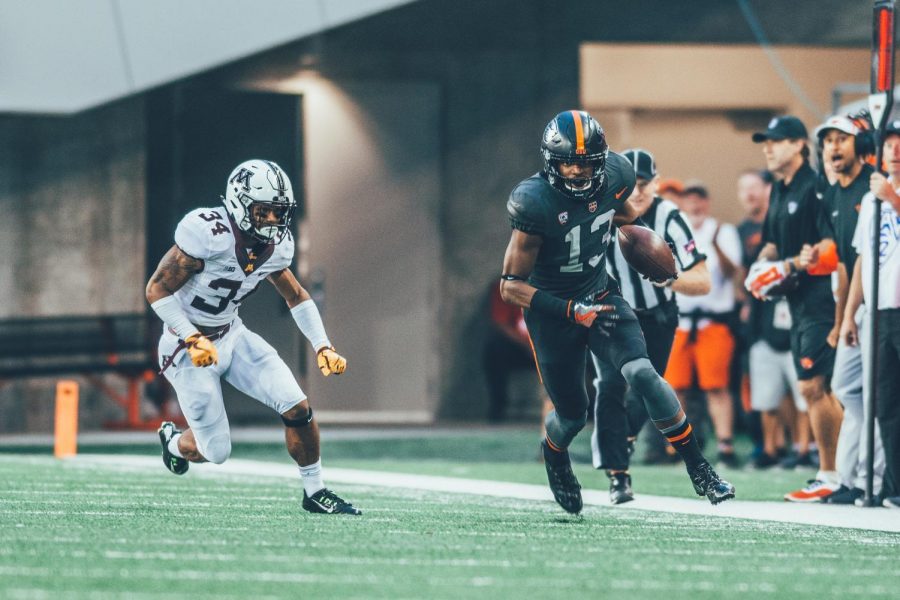 Senior wide receiver Jordan Villamin running down the field after catching a 30 yard pass from quarterback Jake Luton. Villamin finished with three catches for 55 yards and one touchdown in Oregon State's 48-14 loss to Minnesota.

For 37 seconds Saturday night, the Oregon State Beavers and the 35,206 fans at Reser Stadium had a lot to cheer about. For the remaining 59:23 of their game against the Minnesota Golden Gophers however, the outlook was less positive.

After going down 17-0 early in the second quarter, OSU put together a pair of scoring drives to bring Minnesota’s lead down to three. OSU senior receiver Jordan Villamin caught his first touchdown of the season on a 16-yard pass from starting QB Jake Luton. Then after a fumble recovered by Bright Ugwoegbu on the Minnesota 17-yard line, the Beavers capitalized on a pass interference call through a 2-yard Trevorris Johnson touchdown run.

Yet, with momentum seeming to swing back in the Beavers’ favor, the Golden Gophers tacked on a 48-yard field goal to take the lead 20 to 14 going into halftime, and the Beavers would not score again in the game.

A steady rain began to fall in the second quarter, and did not relent until near the completion of the game. Sunny at kickoff, many fans took the storm as an excuse to leave. At the second half kickoff, the student section and the rest of the stadium–excluding the Minnesota fans–was rapidly emptying.

Both the third and fourth quarters were dominated by Minnesota. The Gophers continued to capitalize on OSU turnovers in the second half, converting a Ryan Nall fumble in the third quarter into a three-play drive ending in a 1-yard Rodney Smith touchdown run. Shannon Brooks would also score on a run from 2-yards before the quarter end.

OSU’s Jalen Moore was ejected with 6:50 remaining the quarter after being called for targeting. This means he will not be eligible to play the first half of the Beavers’ game next weekend at Washington State. Moore was ejected twice last season–against Idaho State and UCLA.

The Beavers finished the third quarter with just 24 total yards on offense and zero points scored. Minnesota finished with 69 total yards and 14 points.

Brooks led Minnesota’s rush attack with 93 yards and 3 touchdowns on the night, with Rodney Smith tacking on another 93 yards and 1 touchdown.

OSU finished the game with 145 yards passing, 113 of which came in the first half. Receiver Timmy Hernandez was the only other Beaver besides Luton to complete a pass during the game following a 10-yard fake punt pass to tight end Tuli Wily-Matagi in the second quarter.

The Gophers had the ball on offense for more than 38 minutes of the game and finished with a total of 411 offensive yards. The Beavers had 225.

OSU head coach Gary Andersen’s post-game press conference appearance was somber and dejected. When asked about the second-half collapse the Beavers experienced against the Gophers, Andersen responded by simply stating the team did not perform as it should have.

“This is absolutely not what I expected in any way shape or form. It’s on me.” Andersen said. “It’s not on those kids. I’m the one who hired the coaches. It’s all on me.”

To the fans, Andersen understands that this isn’t the best football to be watching right now.

“It’s a pretty tough deal for those guys, I would imagine.” Andersen said. He went on to say that this is his team, and he gets that they are not playing well, but he is going to keep battling and keep fighting.

Luton did not shy away from the fact that a result such as this is painful for the team.

“Right now it hurts, you have to let it hurt. Tonight we are going to go home to our houses and it’s going to hurt, but that’s the way it is,” Luton said. “But tomorrow we are back to work and you can’t spend a lot of time thinking about, you know, how you feel about things.”

Luton, like Andersen and his fellow teammates, put the emphasis on using this as an opportunity to learn and look towards next week’s game.

Villamin put the focus on Pac-12 play and reassured that a win next week would put the Beavers on the right track for the rest of the season.

“If we can get on the road from here we’ll be fine, we just need to learn from these couple of losses and move on,” Villamin said. He did acknowledge the team’s’ poor second half performance though by stating the team did not play with any energy after coming back out of the locker room.

The Beavers will travel to Pullman next weekend to take on Washington State. Kickoff is set for Saturday at 2:30 p.m.