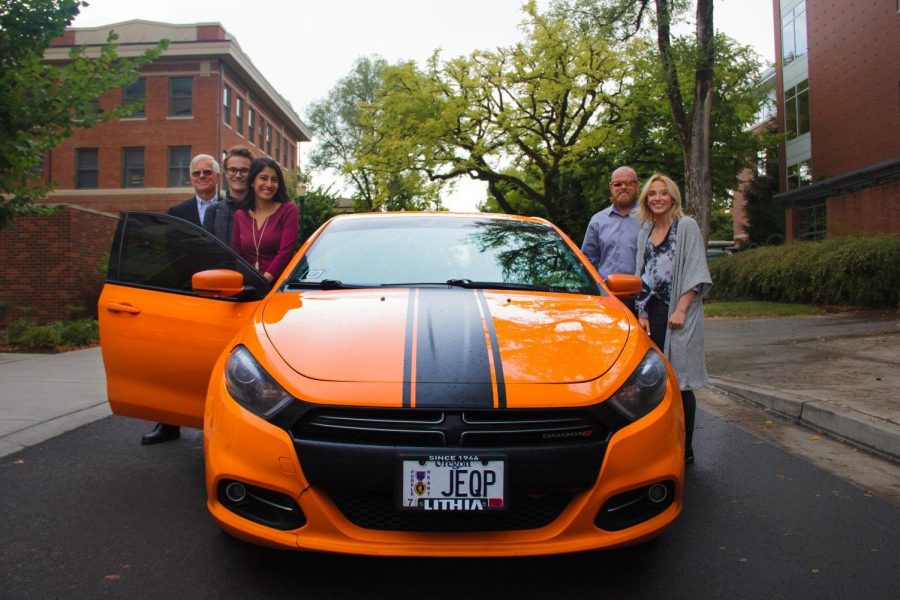 Corvallis mayor Bill Traber, ASOSU President Simon Brundage, ASOSU Vice President Rhadika Shah, Uber driver James, and first year business student Halle Higgins posing for a photo before taking the first official Uber ride in Corvallis. Higgins is the sister of Maddi Higgins, who was killed in a car accident in 2011, and is now an advocate for safe driving.

In a unanimous decision, the Corvallis City Council voted to allow ride booking companies like Lyft and Uber to operate in the city of Corvallis.

This ordinance, passed on Sept. 18 just before 8 p.m., adjusted the city code to allow Corvallis residents to utilize these ride booking apps, which allow a user to request a car to pick them up at their location with a few taps on a smartphone. The ordinance would replace the current Corvallis Municipal Code Chapter 8.07 governing taxi service regulations and licenses, which had previously made operating these services illegal.

As of Wednesday, Sept. 20, both Uber and Lyft are operating in the Corvallis area. Jim Brewer, the city attorney for Corvallis, explained that the city plans on developing standard application forms and a fee schedule before the end of 2017.

“At the current time, rideshare companies need to send a letter certifying compliance with the code language and to provide insurance at the required level and form,” Brewer said in an email.

Last year, Corvallis Mayor Biff Traber was contacted by an Oregon State University student who wondered why ride booking apps were not available for them to use in the Corvallis community. According to Traber, he had previously been unaware of students’ desire for the services, but as he learned more about what constituents wanted, he raised the issue to the City Council.

“I think the key to me was to make sure whatever we did broadened the service-providing so that multiple solutions could be provided to the community and doing so in a way that did not make it difficult for existing services,” Traber said.

Jon Isaacs, the public affairs manager for Uber Northwest and a former president of the Associated Students of OSU, credited current ASOSU President, Simon Brundage, with advocating for the ordinance to the City Council.

“He picked up where the previous ASOSU administration left off and really led the charge on this,” Isaacs said via email. “As a result of Simon’s strong advocacy and leadership, the City Council was motivated to act quickly and take the necessary steps to bring ridesharing to Corvallis before fall classes began.”

Brundage echoed Isaacs’ excitement, noting that students attending parties will now have the safe option to take a Lyft of Uber home, as well as the jobs the services can bring.

“I’m excited for the opportunities that it’s going to bring to the city as a whole,” Brundage said. “It was a long process, but I think we’re finally coming to a really healthy conclusion.”

The long process, according to Brundage, began with his and ASOSU Vice President Radhika Shah’s predecessors last year. After the transition in leadership, Brundage himself adopted the goal as a pet project over the past summer—corresponding with Isaacs at Uber, city councillors and Traber to articulate the student need for ride booking apps.

“The effectiveness of the testimony is really a testament to student power in general in even local/municipal decisions,” Brundage said.

Brundage began his term in June pushing to allow these services to operate in Corvallis, and has spent the summer giving testimony before the City Council and collaborating with ride booking companies themselves to make this promise a reality.

“I just think this is an incredible victory for students,” Brundage said. “I really sympathize with a lot of the sentiments expressed by taxi drivers here in the city of Corvallis, but overall I see this as a net benefit for the community in terms of sustainability, local job growth, but also, and most importantly in my opinion, is the safety of our students on campus, which constitute a significant portion of the Corvallis population.”

According to Isaacs, the service already has thousands of riders who live in and around Corvallis. The company also expects users to travel between Corvallis and Salem, where Uber was already adopted into the city’s transportation infrastructure.

“We expect to have hundreds of active drivers in a community the size of Corvallis,” Isaacs said in an email. “We look forward to Uber being a safe, reliable and convenient way for Beaver fans to get to and from Reser stadium for football games this fall.”

At a Sept. 18 meeting of the Corvallis City Council, many business representatives and community members gave testimony, both for and against the proposal. Owners and drivers of multiple taxicab companies argued against the change, citing concerns for the safety of ride booking services as well as the impact on small, locally-owned businesses. The ordinance was supported during the proceedings by representatives of both Uber and Lyft, as well as Brundage.

One of the concerns opponents of the measure expressed at the council meeting was security. Considered contractors, rather than employees, the fear was that Lyft and Uber drivers face a different level of scrutiny for background checks and liability than taxi drivers.

Given these concerns, Brewer explained that the city of Corvallis will require companies to ensure the safety of their passengers to an extent.

“The city will no longer be conducting background checks itself, but will require the companies to perform this function,” Brewer said via email. “Record sharing and audits are essential for the City’s role in this reduced regulatory role.”

In the text of the ordinance itself, both taxi and ride booking companies are required to keep detailed records of their drivers, who must be at least 21 years old. Before an individual can work for either a ride booking or taxi service, they must pass a criminal background check administered by the company or a qualified third party.

Brundage addressed another concern about the ordinance that had been brought to his attention—that by helping intoxicated students get around, ride booking apps could encourage dangerous activities. He argued that rather than encouraging drinking, the service will simply keep students safe if they make that decision, not change their behavior.

“It’s the same kind of notion as providing free condoms and free birth control: we know that students are going to be corresponding in that particular way,” Brundage said. “It’s such a silly analogy, but ride booking brings a safe alternative for people to get home if they’re going to engage in behavior like that out on the town.”

Students who cannot safely get themselves home continue to have the option of using ASOSU’s SafeRide shuttle service, which can be hailed via a free app or a phone call. According to Brittany Nefcy, the coordinator of SafeRide, this aspect of the service can cause some misconceptions for some students about SafeRide’s purpose.

“We’re a service that is for all students and all levels of safety, so that does involve folks who’ve chosen to engage with alcohol, but that also just involves people who don’t want to walk around at night, whether they’re alone or in a group,” Nefcy said. “Putting that out there, that we are a service that is for everyone, yes we do allow for folks who are intoxicated to use our service, but that doesn’t mean we’re then not here for everyone else.”

Another difference between the services is that while SafeRide will pick students up anywhere, it cannot drop riders off at commercial locations, according to Nefcy. She predicts the introduction of ride booking apps will have positive impacts because it will allow the services to complement each other. This is in contrast to some of the concerns voiced to her that ride booking will compete with SafeRide to the degree that the program is no longer able to provide enough rides for its cost.

“I don’t think that will happen based on our numbers. I don’t remember down to the exact number, but we had around 65,000 requests last year and we only completed about 36-37,000 of them,” Nefcy said. “Those thousands, I think, are potential for Uber and Lyft to come in for that group, and I think we’re still going to wind up in the 30,000ish range.”

According to Brundage, as an ASOSU program, SafeRide obtains its funding from student fees and does not incur an individual cost to students at the moment when they need a ride. He envisions a system where students can choose Uber or Lyft in situations when wait times are a concern, and SafeRide when cost is a concern.

“People who have the economical means to call an Uber or a Lyft, they’ll be able to choose that option and free up time on SafeRide for people where Uber and Lyft is just quite simply not an option,” Brundage said.