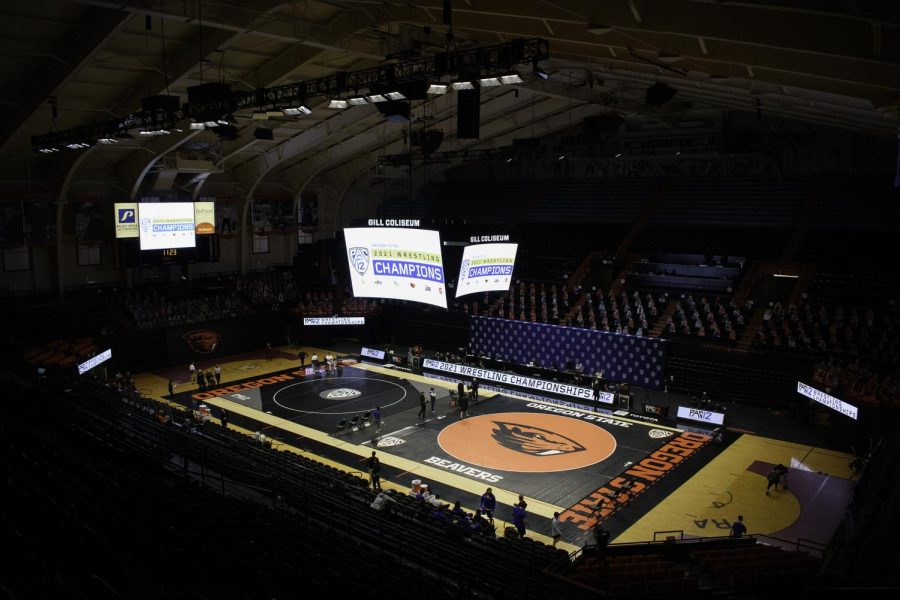 Imagine going straight from coaching six wrestlers at the NCAA tournament, to then going to coaching one of your good friends, and being in their corner as they fight to qualify for their second Olympic games.

This is the experience that Assistant Wrestling Coach Nate Engel had, as he got to coach one of his good friends, five-time world champion and Olympian Adeline Gray, at the U.S. Olympic Wrestling Trials on April 2 and 3, a few short weeks after the wrestling tournament.

Engel and Gray have known each other for quite some time. In fact, Engel and Gray’s friendship goes all the way back to 2007, when the two first met each other at Northern Michigan University.

“Back in 2007, I moved out to Northern Michigan University, and she [Adeline] was in high school. I want to say she was a junior in high school,” Engel said. “And they had another program for women’s freestyle [wrestling]. We got to really know each other.”

Gray was looking for someone to be in her corner for domestic wrestling tournaments. So while Engel and Gray were out for lunch one day, she asked Engel if she could become part of the California Regional Training Center, and have Engel as a coach.

“We were sitting at lunch, and she said ‘Hey, I would love to come be a part of your R.T.C. [Regional Training Center] and have you as a coach. I see how you work with your athletes, and I need a personal coach,’ Engel said. “I was like ‘Wow, this is pretty awesome to be asked to do that,’ you know? She’s one of the best, if not the best wrestler in our times, so I went back to Stanford and talked to some people, and the rest was history.”

Even when he took the job of becoming an assistant coach at Oregon State, Engel still wanted to have Gray become part of the Beaver Dam Regional Training Center, which is based in Corvallis, Oregon, and connected to the Oregon State wrestling program.

“When I took the job [here at Oregon State], I said ‘One big thing I want to do is bring Adeline here because I enjoy coaching her and our relationship’ and Chris Pendleton [Oregon State Wrestling’s head coach] was all in favor of it. We’ve had some really good donors that believe in what we’re doing, so it was an easy transition for her.”

The original plan was to train for the U.S. Olympic Wrestling Trials for the 2020 Olympics, which were originally supposed to be held on April 4-5, 2020 at the Bryce Jordan Center at Pennsylvania State University. But because of the COVID-19 pandemic, the Olympic trials were postponed, and for a long time, no one knew when they were supposed to be rescheduled, much less if the Olympics were even going to happen.

This left some uncertainty in Gray, but Engel did his best to keep Gray’s head calm, and still conducted workouts for her and several other female wrestlers. All of these workouts were conducted over Zoom.

“When I got the job at Oregon State, obviously the pandemic was really crazy because I was running zoom workouts for her, Mallory Velte, who was in Canada at the time, and a few other women’s freestyle athletes,” Engel said. “[I was] trying to keep her mind relaxed because no one knew when the Olympics were going to be.”

But when the Olympic Trials were announced to be held in early April 2021 in Fort Worth, Texas, Engel and Gray knew that finally, after months of uncertainty, Gray’s dreams were back on track.

One thing that Engel knew is that, even in the midst of a pandemic, there were still bound to be a handful of fans and cardboard cutouts at the event. And Engel was happy to see that both the Beaver Dam RTC, as well as Oregon State, were getting support at the Olympic Trials.

Because Gray is a five-time World champion and qualified for the Olympic team back in 2016, she had secured her spot in the finals, meaning that she had to wait a whole day before she would step a foot on the mat. Gray didn’t even know who her opponent was going to be.

Once again, Engel was by her side while the two waited. And it was a big surprise when Kylie Welker, a 17-year-old, beat everyone in her bracket to make the finals.

Engel knew that Gray was two matches away from qualifying for her second Olympic Team. Engel said that before her match, he told Gray to not only wrestle hard but to have fun as well.

Gray won both of her matches by technical superiority, winning her first match 10-0, and her second match 11-0. With those wins, she had qualified for her second Olympic team at 76 kilograms. Engel said that Gray making the Olympic team was a long time coming.

“When she won, I hugged her and said, ‘Hey it’s been a long year, but you stayed the course and you made the team and now it’s time to go win your gold medal,’” Engel said.

Looking back on the impact that Gray had on the Beaver Dam Regional Training Center, Engel said that she has not only impacted the RTC, but the sport of wrestling as a whole.

“I think first and foremost, for our first year as a regional training center it’s huge to get an Olympian,” Engel said. “She’s been incredible for our RTC, our fans, our donors. They love Adeline Gray for what she stands for and who she is as a person. And as coaches, we couldn’t be more proud. To be a little bit of getting where she needs to be an Olympic champion”.

Engel knows that those two wins already add to Gray’s everlasting legacy. And he hopes that in Tokyo, not only does he hope that she wins her first Olympic gold medal, but also continues to inspire those around her.

“A lot of people look up to Adeline Gray,” Engel said. “Male, female, it doesn’t matter. They look up to her because of the success she has and who she is as a person. It keeps adding to her legacy. In Tokyo, we hope that she wins a gold medal and keeps adding to that legacy and impacting young wrestler’s lives on a daily basis.”