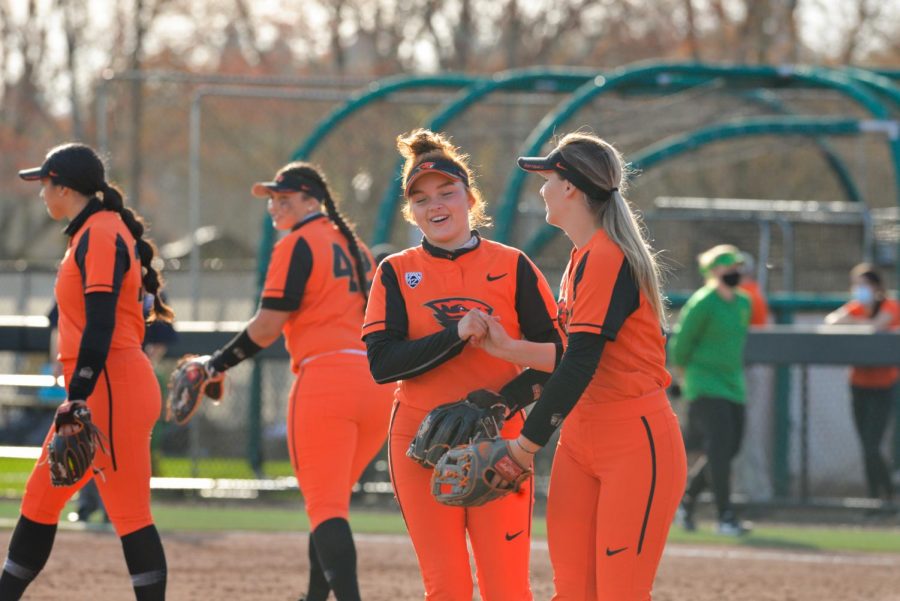 Sophomore shortstop Maya Raider shakes hands with freshman 3rd baseman Grace Messmer before the Ducks were up to bat at the top of the 3rd inning. The Beavers put up a fight against the Ducks but were just edged out by the University of Oregon with a final score of 4-3

Oregon State Softball took on their rival, the third-ranked Oregon ducks in a four-game series at Kelly field earlier this month, April 1 through April 3.

The Beavers put in a strong performance against the ducks though fell short in winning the series outright.

Oregon State held the score close against Oregon, but eventually ending with a 2-0 loss. During game one, Oregon State junior pitcher Mariah Mazon held the Ducks in check with a strong performance from the mound allowing two runs on just five hits in the game.

The Ducks scored early in the first with a solo home run by Oregon Senior Haley Cruse. The Beavers’ Mazon refused to allow any other scores until the seventh inning. By the fourth, both teams were set up to score. Oregon loaded the bases by the top of the fourth, yet Mazon was able to pitch her way out of trouble.

On April 2, the Oregon Ducks returned to OSU to take on the Beavers in a doubleheader at Kelly Field. The Beavers opened the doubleheader with an 8-1 victory against the Ducks, OSU Mariah Mazon had another impressive game from the mound, striking out seven Ducks while OSU sophomore Maia Rader matched an Oregon State record with four runs. Beavers freshman Madison Simon hit her second home run of the season.

In game two of the Friday doubleheader, however,  the Ducks returned to Kelly Field ready to win. Oregon junior pitcher Brooke Yanez tossed the second shutout of her career at Oregon. The Beavers battled to close the gap while OSU Nerissa Eason struck out seven ducks and allowed only two earned runs for the Ducks.

Saturday April 3 concluded the rivalry series on Kelly Field, with the Beavers coming up short giving up a 4-3 loss to close the finale. Mazon led the mound, going the full seven innings striking out five of the Ducks. Beavers’ sophomore Frankie Hammoude and junior Missy Nunes hit back to back home runs propelling the Beavers to just one run behind the third-ranked Ducks.

The Beavers were set up to score again, when Oregon pitcher Brooke Yanez held them off to secure the Ducks one run victory.