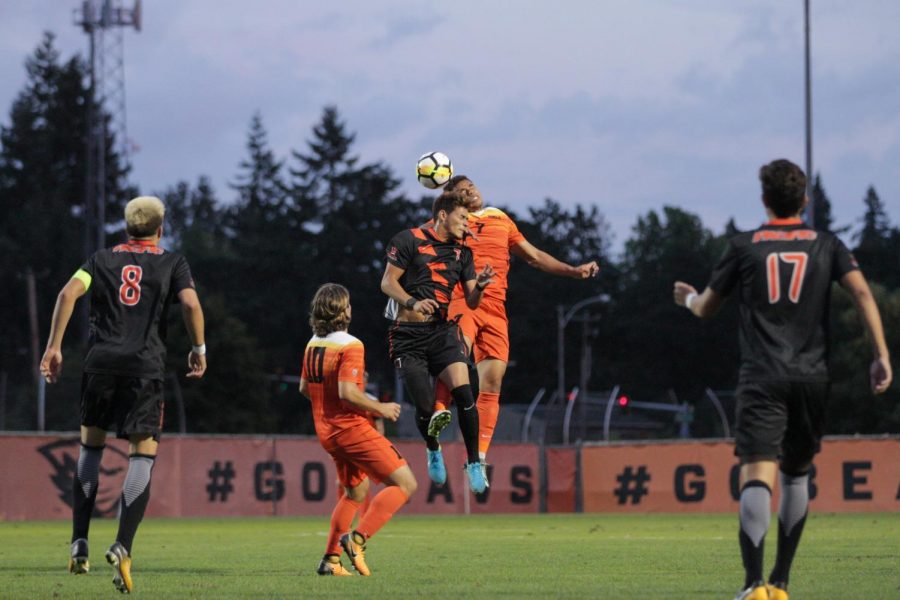 Midfielder Hassani Dotson competes for a header while Jaime Miralles looks on. The Beavers their final non-conference game of the season by a score of 2-0. They will face Washington next weekend to open Pac-12 play.

Coming into their final non-conference game of the season, the Beavers were looking to break a three-game losing streak. Goals from Jordan Jones and Nathan Braaten secured the victory and improved the team’s record to 3-5 overall on the season.

“I think, when you get frustrated with losses, there’s a tendency for athletes to overthink, and tonight they came out, competed and worked hard against a very good team,” head coach Steve Simmons said in a press release from OSU athletics.

With his game winning goal, Jones joins Hassani Dotson for the team lead with two goals scored each so far this season.

“It’s hard when you should be getting results and they don’t come your way,” Simmons said in the press release. “So, for these guys, it’s incredible that they did this and I’m proud of them.”

In other news from the team, senior forward Timmy Mueller was named one of the 30 Senior CLASS Award candidate from the Senior CLASS Award organization. An acronym for “Celebrating Loyalty and Achievement for Staying in School®”, the Senior CLASS Award looks at student athletes’ work both on and off the field, especially in the area of leadership and community involvement. Finalists for the award will be announced in December during the postseason.

The Beavers have the week off and will head up I-5 to Seattle next Sunday to take on the Washington Huskies in the team’s first conference game of the season.