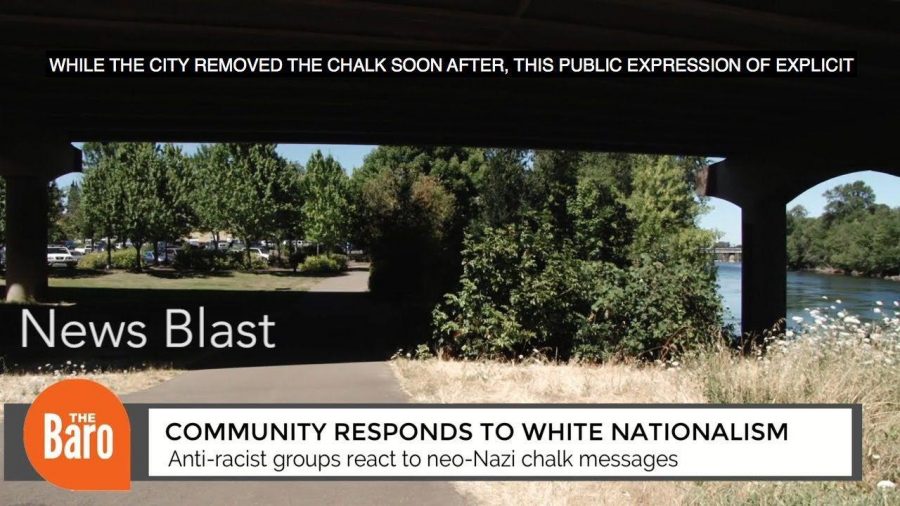 Corvallis anti-racist groups are exploring a variety of approaches in responding to white nationalism after instances of explicitly racist activities.

On the morning of July 19, the City of Corvallis removed messages chalked near the waterfront such as “Uncle Adolf Hitler was right,” “the (Corvallis Multicultural Literacy Center) must be razed” and a call to “build the wall” accompanied by swastikas.

This incident drew notable public attention, but in months and weeks preceding it, other expressions of racist views also occurred. The Oregon State University Ethnic Studies department was targeted with racist flyers and stickers, according to Tony Vogt, an instructor in philosophy and sociology. During a meeting for the anti-racist group Showing Up for Racial Justice, similarly racist stickers and flyers were placed on attendees’ cars, according to Faith Reidenbach, a leader in the Corvallis chapter of SURJ. In May, at the sixth-annual Solidarity Fair, white nationalists attempted to disrupt the proceedings, according to fair organizer Lisa Gonzales.

SURJ, a national organization, organizes white people to take action for racial justice as part of a multiracial alliance, according to Reidenbach. Reidenbach stressed the importance of building community with people of color, and emphasized that white anti-racist activism must be grounded in the expressed needs of communities of color.

“White nationalism is the belief that our national identity should be built around white ethnicity,” Reidenbach said in an email. “(White nationalists believe) that white people should therefore maintain both a demographic majority and dominance of this nation’s culture and public life.”

To demonstrate opposition to the white nationalist sentiments expressed earlier in the week, Community Action for Racial Equity, along with SURJ, brought community members together on July 21 and 22 to chalk messages of inclusivity in downtown Corvallis. These messages included phrases such as “strength in diversity” and “hate-free zone.”

Sue Goodman, a member of CARE, said that many people are naive when it comes to issues of racism, bias and white privilege. With communities becoming more diverse, she said it is especially important that communities take an active approach on every level of engagement from education to taking to the streets to protest.

“We are grassroots,” Goodman said. “We are action-oriented, and purposefully direct action aimed at institutional racism, so holding individuals and institutions accountable when things happen is something that we try to force the hand on.”

In the days following this response, CARE and SURJ received notice of over 50 white nationalist stickers around downtown Corvallis on poles and cars, which were subsequently removed by anti-racist volunteers.

Amid the growth of these kinds of activities in the US in recent years, according to the Southern Poverty Law Center, a non-profit organization that tracks hate groups, anti-racist groups have been engaging with the question of how best to respond to white nationalism.

When the Solidarity Fair had a direct encounter with a group of three to five white nationalists in May, fair organizers recommended attendees not engage them directly. After becoming aware of a possible confrontation, organizers formed a team ready to address any potential conflict. This was done with the intent of maintaining safety and keeping the focus in the celebratory spirit of the event while not giving the demonstrators attention, Gonzales said. The small group of white nationalists left after about two hours with no escalation beyond general tension.

This approach based on non-engagement and de-escalation is one model of response to white nationalist activity, but the multitudes of groups outside of Corvallis experiment with and implement a variety of practices. José-Antonio Orosco, an associate professor of philosophy and director of the peace studies certificate program at OSU, pointed to a number of notable and interesting examples of community organizing against white nationalism.

Orosco mentioned Redneck Revolt, a group organizing rural, white, working-class communities to participate in revolutionary anti-capitalist and anti-racist organizing. Redneck Revolt provides an alternative political vision that embraces a “redneck” identity with an ideology based on working-class anti-racist solidarity. A group opposed to a strictly nonviolent approach, Redneck Revolt affirms the right to armed community defense against racist and violent forces both personal and institutional.

Another example Orosco pointed to was the Rural Organizing Project, a grassroots organization that engages with communities in rural Oregon to build and defend democracy and social justice. Their work includes organizing on a grassroots level to resist the influence of right-wing militia groups in rural areas. CARE and SURJ are sponsoring an ROP training in Corvallis this fall titled “Creating a Culture of Safety and Security,” according to Reidenbach.

In engaging with the problems presented by a growth in white nationalist activity in the US, anti-racists are interested in an analysis of what brings people into white nationalist circles in order to better understand how to organize against it.

“I think that it’s fairly obvious to many people that with the recent election we have opened up the floodgates for normalizing this type of attitude and behavior,” Goodman of CARE said.

According to Orosco, while many consider the presidential campaign and election of Donald Trump an influence that has emboldened white nationalist activity, there are also other factors that contribute to the appeal of racist far right ideologies beyond this recent context. Orosco suggested that feelings of victimization by society play an important role in attracting people to ideologies like white nationalism.

“I think there are these deep dark places in the internet which foster a certain kind of hostile attitude, particularly amongst young men,” Orosco said. “The way in which, for instance, the alt-right talks about masculinity—criticizing their critics as ‘cucks’ and all this kind of stuff—there’s a certain kind of hypermasculinity that’s being portrayed by the alt-right as part of their appeal.”

Aside from the particular culture of white nationalism online, many are also concerned with the broader philosophical elements of the ideology that draw in its proponents.

Vogt is also a co-creator of the Anarres Project for Alternative Futures, a forum for imagining what socially-just futures can look like and how to build them. Vogt noted that the vision of a white nationalist future, while hierarchical and brutally exclusionary, tries to appeal to a sense of belonging by promising white people recognition for their particular contribution to the imagined white nation.

“Better informed, historically conscious alternative visions must counter this appeal with a richer understanding of both the possibilities and realities of community, based on a far more inclusive and egalitarian sense of what it means to be human,” Vogt said in an email.

Corvallis Showing Up for Racial Justice