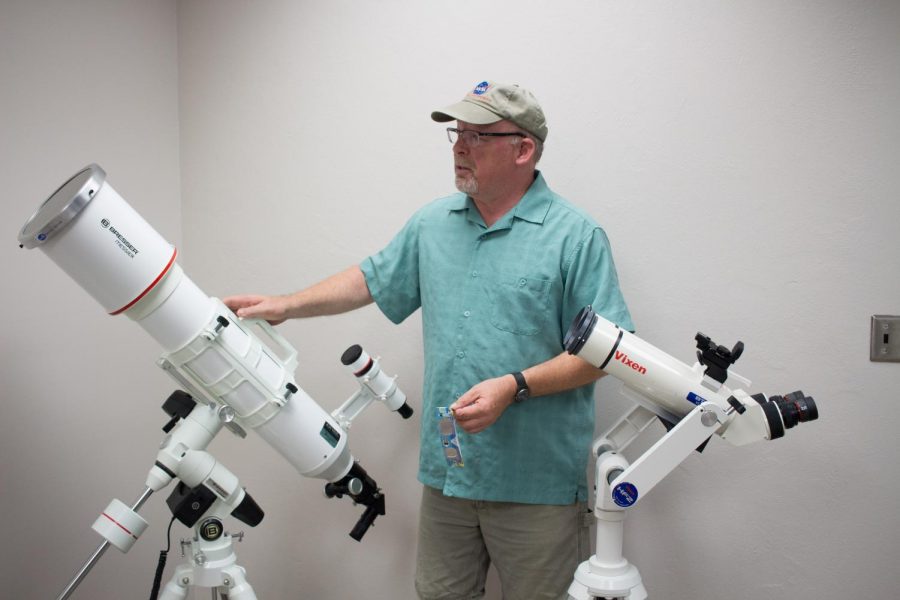 Richard Watson, who serves on the board of directors for an amateur astronomer’s club associated with the local Corvallis community, the Heart of the Valley Astronomers, has sought out four solar eclipses in his lifetime, traveling as far as Cabo San Lucas to see these spectacles. However, for the upcoming eclipse he will not have to leave his own home.

“Let me put it this way, the fact that there’s an eclipse coming through here is a reason I moved to Corvallis,” Watson said.

According to Watson, his hobby of astrophotography made him fascinated with objects that ‘come and go’. The solar eclipses he has experienced are over so quickly there is not a great deal of time to capture a desired picture, according to Watson.

“How many pictures do you need of something that stays the same? Transient stuff you have to get a little bit more lucky,” Watson said.

However, staying behind the camera is not always the best experience. According to Watson, during his first solar eclipse in Montana in 1979 he regretted spending too much fiddling with the camera since, even though the event may be a few minutes in some locations, it can feel like seconds. This brevity can leave a person wanting more, according to Watson.

“The first words you speak after your first solar eclipse are ‘where’s the next one,’” Watson said.

Tom Carrico, the head of the Heart of the Valley Astronomers, is helping the Corvallis community to prepare for these brief seconds of totality happening in August.

Though retired from human resources a couple of years ago, planning for the solar eclipse has become more than just a part-time job. According to Carrico, lessons that the Heart of the Valley Astronomers teach at the Corvallis public library have been selling out in a matter of minutes.

“(The eclipse) goes through a bunch of cities, but nothing like Corvallis,” Carrico said.

According to Carrico, this is because Corvallis is decidedly the intellectual center for the solar eclipse, and people are relying on groups like the Heart of the Valley Astronomers to educate them about the event.

One of the professors Carrico has worked with closely is Julia Bradshaw, an assistant professor in the Arts Department at OSU.

According to Bradshaw, she will be holding workshops to help people learn how to take pictures of the solar eclipse.

One of the most crucial pieces of advice both Carrico and Bradshaw give to people during their workshops is eye safety. According to Carrico, even when looking at the sun with a camera there must be a special filter on the end of the lens in order to be safe for the human eye. Being aware the sun can harm eyes at all stages of the eclipse, except complete totality, is extremely important to understand, according to Carrico. However, more than anything, both Carrico and Bradshaw are excited for the solar eclipse.

Bradshaw’s interest towards the eclipse came with the properties of light which she will be experimenting with in her photography during the eclipse’s totality.

With a focus in astro photography Carrico is extremely excited to get a picture of this event however, he doesn’t want the focus of his attention to be on photography.

“I’m not going to hover over the camera or the telescopes. I’m not gonna do anything like that. If it’s not automated I’m just gonna sit back with my Dr. Pepper and enjoy the eclipse,” Carrico said.

Being able to enjoy the eclipse simply by stepping out the front door is an experience many wish for, according to Carrico. That’s why, after multiple offers of location choices, he decided to simply stay at his home in Corvallis.

“I think it’s just better to experience it in your backyard. I mean, how cool is that? You just roll out of bed, fall onto your deck, and there it is,” Carrico said.

According to Carrico this will be his first total solar eclipse, even though he has seen many lunar eclipses and partial eclipses in his lifetime.

In 1979, Randall Milstein, an astronomy professor at OSU, said he was able to witness a partial solar eclipse happen over the mainland United States while he was living in Michigan.

“That’s the one thing I remember from seeing, not even a total eclipse, a partial eclipse in 1979, was that it was dead quiet. Everything just stopped. And that struck me as the most eerie thing,” Milstein said.

According to Milstein, the solar eclipse is an event some people have planned years, if not decades for. For some, the eclipse may be a very moving event, and people need to be polite and aware of others since some will be traveling across the globe to see this event, according to Milstein.

Like Carrico and Bradshaw, Milstein is putting on workshops throughout Corvallis and other cities around the path of totality in order to remind everyone this event can be very life-altering. According to Milstein, his workshops are intended to remind people totality will only be in Corvallis for a minute and 40 seconds and it will not be repeated.

“There are people who witness a solar eclipse and laugh, other people will sob, or literally fall backwards on the ground and just sit there with their mouth open. Some people will sing or hum, or there will be just dead silence,” Milstein said.