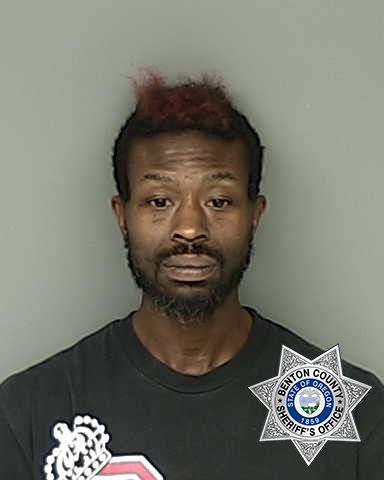 The mugshot of Steven Lance Thompson, a suspect arrested this morning in connection to yesterday's armed robbery.

This is an ongoing story, which will be updated as it develops.

The Corvallis Police Department has arrested 39-year-old Steven Lance Thompson in connection with yesterday’s armed robbery of the Subway restaurant located on Monroe Avenue, across the street from Gilfillan Auditorium.

According to a CPD press release, at approximately 9:45 a.m., Thompson was apprehended by detectives. Thompson was charged with robbery in the first degree and burglary in the second degree and is being held at the Benton County Jail on a $125,000 bail.

Lt. Daniel Duncan of the CPD said the suspect was found downtown.

“Once they figured out who they were looking for, they found him on a sidewalk,” Duncan said. “I’m not quite sure of the exact location.”

According to Duncan, several detectives are still working on the case, but he expects more details tomorrow depending on where the investigators’ leads take them.

The initial capture was aided by the Philomath Police Department, who commonly collaborate with the CPD on large cases, according to Duncan.

“We’re always willing to help each other out,” Duncan said.

At approximately 3:45 a.m., an armed robbery occurred at the Subway restaurant across the street from Gilfillan Auditorium, according to a Corvallis Police Department press release. Presenting a handgun, the masked suspect was given an unknown amount of money, according to Lt. Daniel Duncan of the CPD. By the time officers arrived on the scene, the suspect had fled.

“Luckily, no one was injured,” Duncan said.

An email sent to all students by the OSU Department of Public Safety described the as-yet unidentified suspect as a black male who looked to be in his late 20s or early 30s, approximately 120 lbs. and 5’7” tall. The suspect was wearing black clothing at the time of the crime and was last seen heading toward campus.

According to Duncan, detectives are currently working on the case. Any information related to this incident should be directed to Det. Christy Molina at 541-766-6782.