OSU receives over $121 million, largest grant in its history 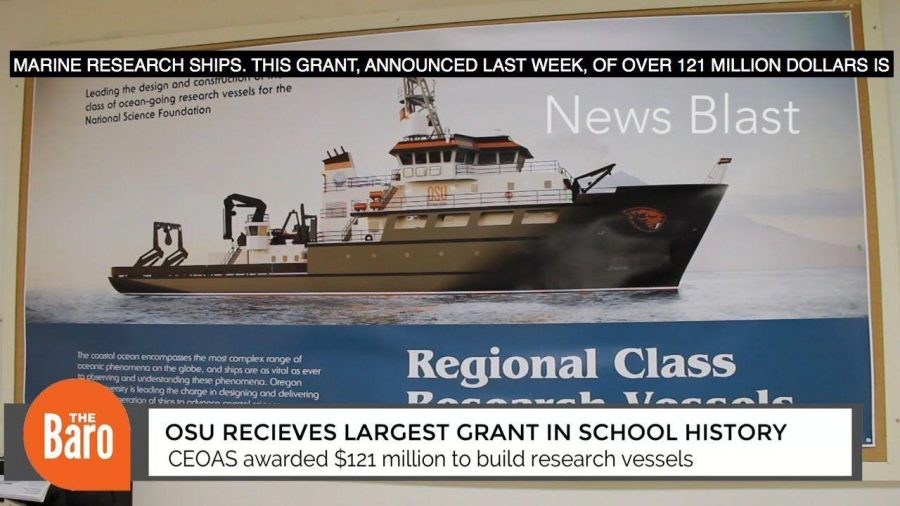 Oregon State University’s College of Earth, Ocean and Atmospheric Sciences received a $121.88 million grant to begin construction on newly-designed marine research vessels, according to an OSU News and Research Communications release. Awarded this past week by the National Science Foundation, it is the largest grant ever received by the university. According to project scientist Clare Reimers, the vessels will be used by scientists and educators from academic, government and nonprofit institutions in marine biology, climatology and many other fields.

A team of faculty led by Reimers and project manager Damien Bailey have been developing the research ships since 2012, when the original grant was issued to improve upon the existing research vessel design. These OSU scientists are working in partnership with Glosten, an engineering firm based in Seattle. This new grant will allow the contract recipient, Gulf Island Fabrication, to begin construction in one of its Louisiana shipyards.

Brian Midson is the program director for ship and submersible support at the National Science Foundation. As part of this job, he plays a key role in the development of updated marine technologies, and he has been a primary NSF contact for OSU over the course of this project.

“(OSU did an) admirable job of meeting the science mission requirements as well as incorporating input from the science user community,” Midson said.

According to Reimers, these ships will be used in coastal areas, with research capabilities designed for versatility across scientific disciplines. General-purpose oceanographic research vessels such as these are equipped to collect data for a multitude of different fields of research. Technologies on board will have a variety of useful applications, including seafloor mapping, marine biology imaging and atmospheric sampling. These broad capabilities create a format where research parties from various disciplines can integrate into the activities of the vessel. Rather than being equipped for a specialized set of operations, designs such as these aim to be adaptable to a more comprehensive array of research activities.

Roberta Marinelli, the dean of the College of Earth, Ocean and Atmospheric Sciences, expressed excitement with OSU’s contribution to a national marine research fleet that is suffering from a lack of well-equipped vessels.

“The project is a vote of confidence by the federal government and the academic community in OSU’s ability to carry out large projects for the benefit of the nation,” Marinelli said in an email.

Marinelli also pointed to the broader importance of the kind of research that these ships will promote. Earthquake and tsunami activity, climate change, ocean acidification and fishery health all have potentially drastic impacts on the future of global life, so research into the state of marine areas and the activities they host is of paramount importance, according to Marinelli.

Through this project, Reimers said she has been able take part in researching important issues on a larger scale than any one research study. Over the last five years, she has worked alongside the other members of the team to create an updated contribution to the national academic fleet of research ships, which will be involved in oceanographic research for years to come.

“(Marine research is) a wonderful life-changing opportunity that I’ve enjoyed my whole career, and I’m glad we’re making it possible for people in the future,” Reimers said.

For more information on the ships and the research being conducted aboard them, click here.