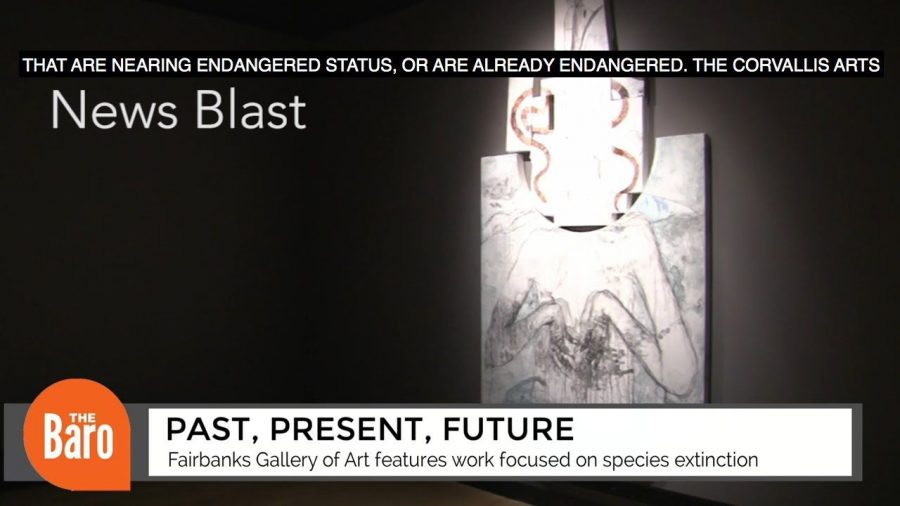 Artist Andrew Myers, an instructor of fine arts at Oregon State University, put together a gallery show in the Fairbanks Gallery of Art. Titled ‘Acreations,’ it focuses on the protection of wildlife while also serving as a stop along the Corvallis Arts Walk.

The gallery in Fairbanks Hall has been used for the Corvallis Arts Walk for almost a year now. This nighttime event occurs on the third Thursday of every month, when many of the art galleries around Corvallis open their doors for their new monthly shows. This allows for community members to walk around and experience many different galleries, and it also allows artists to reach a wider audience.

Andrew Nigon, the gallery manager at Fairbanks Hall, claims that the art walks are an excellent opportunity for art galleries to get recognition and to expose a lot of the art that comes through.

“If there was an art opening every night of the week for three weeks, people would pick and choose what galleries they go to based on just the reading,” Nigon said. “But if they’re all happening at the same time, when you’re out, as you’re walking back to your car or back home, you may cross a gallery and just… pop in for a little bit.”

Each piece in Myers’ collection contains pictures or representations of creatures that are already extinct in the world, such as the Tyrannosaurus rex and other dinosaurs. These works also feature creatures from the present Pacific Northwest that are nearing endangered status or that are already endangered in the area.

Parts of this collection included apex predators, such as grizzly bears, wolves and even humans. Other sculptures contain less menacing creatures, such as local species of butterflies.

While Myers’ sculptures are often created with specific creatures or shapes in mind, a lot of the shapes are chosen at random. According to Myers, he often reuses his materials, which allows for his sculptures to come together more organically.

According to Myers, he builds his sculptures on foam insulation boards, which he paints over. This is chosen because of his ability to add or subtract pieces from a sculpture.

“I like the idea that it is in object, instead of a piece of paper,” Myers said.

Some of the challenges that Myers faced during the creation of these objects included the fragility of the materials, the change in pressure for pencil and brush strokes and the transition from working on the floor to hanging the pieces on a wall, according to Myers.

“This was the first time that I have seen some of them hanging,” Myers said

Myers was inspired to create these pieces because he believes that the preservation of at-risk species is very important.

“Once they’re gone, they’re gone. It is really sad how fast things are disappearing,” Myers said.

Meyers also mentioned that his gallery show is also reflective of a museum, in the sense that he is displaying the remains of previous creatures.

“I think by using foam board as the canvas, you are able to put into perspective the effects of humans on the natural world and the lingering effects caused by humans,” said Justin Bennett, an English major who attending the exhibit.