One million people to visit Oregon for celestial spectacle 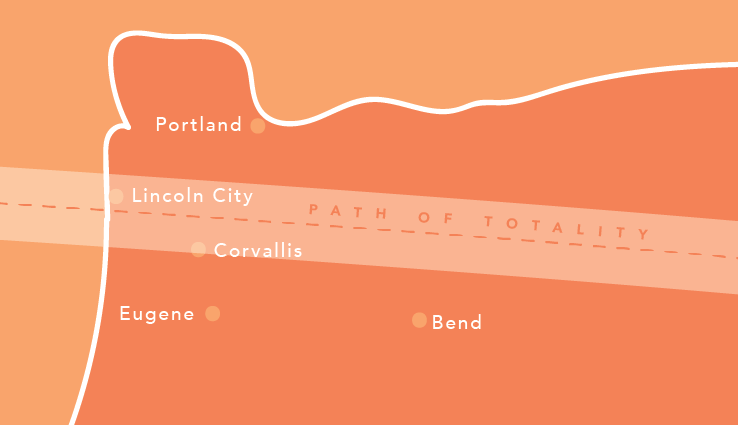 On August 21, the eclipse’s path of totality (the shadow where the eclipse will be entirely visible) will pass through Corvallis.

All eyes are on the sun. All movement on the Oregon State University campus slows to a halt, and the air is still and heavy. High above, the moment everyone has been waiting for arrives: the shadow of the moon almost completely obscures the sun, leaving only a fiery ring of light.

An estimated one million visitors will travel to Oregon to witness a total solar eclipse on August 21. Linn and Benton counties alone may receive as many as 250,000 to 400,000 visitors, according to Randall Milstein, an astronomy professor at OSU and an astronomer-in-residence for the Oregon NASA Space Grant Consortium.

For some people, this solar eclipse will be a once-in-a-lifetime event. According to Milstein, while there is an eclipse somewhere in the world approximately every 18 months, a total solar eclipse has not crossed the entirety of the contiguous United States since 1918.

Unlike a partial eclipse, which only covers part of the sun, the moon will completely block out the sun during the day, causing complete darkness, according to Milstein. The umbra—the densest part of the shadow cast on the Earth’s surface—is approximately 70 miles wide. The passage the umbra takes across the Earth’s surface is referred to as the ‘path of totality’ and is the only area in which a full solar eclipse can be seen, according to Milstein. In Corvallis, the eclipse will start at 9:05 a.m. and end at 11:37 a.m. The moment of totality will occur at 10:16 a.m. and last for one minute and 35 seconds, according to Milstein.

In anticipation of the unprecedented number of people that will make the trip to Oregon to view the eclipse, the state, the city of Corvallis and OSU have been planning for over a year.

According to Dave Thompson, the public information section manager for the Oregon Department of Transportation, most organizations have been working to prepare for the event by taking precautions similar to those taken in preparing for a disaster.

“Corvallis is well-organized. They’re well-practiced and preparing for this,” Thompson said.

According to Patrick Rollens, the public information officer for Corvallis, this event will be a matter of concern for public safety. Tactics for ensuring safety during the event have been discussed throughout the last year and have predominantly focused on visitors who will attempt to travel the day of the eclipse, which could cause some serious problems with traffic, according to Rollens.

“Arrive early, stay a little bit late, try and avoid being on the highway during those peak times,” Rollens said.

According to Paula Negele, a public information officer for the Oregon Office of Emergency Management, the OEM has been planning for the event through meetings attended by emergency planners as well as local business owners and event coordinators. The emergency planners have been facilitating communication between different government services and coordinating the logistics surrounding the visitors.

Like the City of Corvallis, OSU also has an emergency preparedness department focusing on the large number of visitors coming for the eclipse.

Michael Bamberger, the emergency preparedness manager at OSU, has been engaged with local planning for this event. According to Bamberger, OSU Public Safety and Oregon State Police will be fully staffed for this event and patrolling the campus to establish a higher level of safety.

“OSU has experience coordinating large events that involve a portion or all of campus, and we have applied that planning and preparedness philosophy for the solar eclipse,” Bamberger said.

Another large event coinciding with the eclipse is ‘OSU150 Space Grant Festival: A Total Eclipse Experience,’ the first of many events that will occur over the course of the 2017-2018 academic year in celebration of OSU’s sesquicentennial. Attendees will have the option of renting residence hall rooms for the weekend of the eclipse. One-person rooms in Wilson Hall, Callahan Hall, McNary Hall and Finley Hall are available for $265 for the weekend, while two-person rooms are priced at $375. Family-option rooms offered in Tebeau Hall, the International Living-Learning Center and Halsell Hall have already sold out, according to the festival’s website.

Some of the steps taken to avoid conflict at OSU-related events include established parking areas, prohibiting fires and spreading community awareness, according to Bamberger.

“Drivers, bike riders and even walkers need to be alert as to where they are and where they are going. I want to see everyone take their time getting to their viewing spot so they can enjoy the totality at 10:16 a.m.,” Bamberger said in an email.

While preparing for the eclipse, eye safety is a concern both Bamberger and many other members of the community are pushing.

“Sunglasses do not provide enough protection.  Specific solar viewing glasses can be purchased locally for $1 or $2 that allow the viewer to safely view the sun,” Bamberger said.

According to Bamberger, he and others at OSU have been working to make this event as smooth as possible for community members and visitors. The OSU Emergency Management webpage also contains detailed information on viewing safety and traveling.

ODOT is a support agency for local transportation organizations, according to Thompson. Their focus will be on keeping travel efficient and coordinating any emergency service vehicle routes.

“That many more cars will have more crashes. If you’re stuck in a car, what happens if there’s a wildfire?” Thompson said. “Our message is arrive early, stay put, leave late. Treat it as a couple-day event.”

Because of the increased traffic across Oregon, ODOT staff are focusing their attention on multiple routes based on location and popularity. Major highways and freeways through the path of totality are likely to be busy, according to Thompson.

“We’re very worried about I-5. We expect a lot of people coming from California and Washington,” Thompson said. “We’re worried about (Interstate) 84, because it’s a route for big trucks and in the path of totality. So during the time of the eclipse, we’re worried about people stopping on the highway.”

According to Thompson, ODOT is concerned about those who are not planning ahead.

“It’s not just the highways, it’s the local roads as well,” Thompson said. “We’re asking everyday residents to be prepared for that. Local streets may be closed.”

For those unable to avoid traveling, Richard Hoover, the public information officer for the Oregon Office of the State Fire Marshal and the State Police, urges travelers to plan ahead. The trip could be easier if travelers leave several days before and after the eclipse.

According to Hoover, planning ahead includes stocking up on supplies. Traffic could prevent people from leaving their homes.

“Carry a first aid kit and any medications,” Hoover said. “The possibility exists—if you get stuck—that you’ll need these things.”

Another concern, according to Thompson, are the potential shortages of valuable, everyday supplies. This includes gas, food and water.

“If people do arrive ahead of time, they are going to have to gas up and go to the grocery store,” Thompson said. “Plan your shopping and your needs before that weekend.”

According to Hoover, it is safest to stock up on supplies and stay in one place on the weekend of the eclipse.

According to ‘Two Weeks Ready,’ an emergency preparedness organization, having foods that store well and are familiar could come in handy during food shortages and other emergencies. The organization recommends having 3,000 calories available per adult each day.

It’s important to have water available both in vehicles and inside homes, according to Negele.

“There’s the potential for really hot weather and limited resources,” Negele said in an email.

Having one gallon of water per person each day is ideal, according to ‘Two Weeks Ready.’ When sealed in an unopened container, water has an unlimited shelf life. In an emergency, clean water can be found in hot water tanks and toilet tanks.

Despite the importance of planning ahead, safely viewing the eclipse will be the highlight of the weekend.

“Our goals are twofold,” Negele said in an email. “To ensure the safety of lives, property and the environment, and do what we can to work with community members and visitors to ensure residents and visitors have a good time and come away with positive memories of the 2017 solar eclipse in Oregon.”