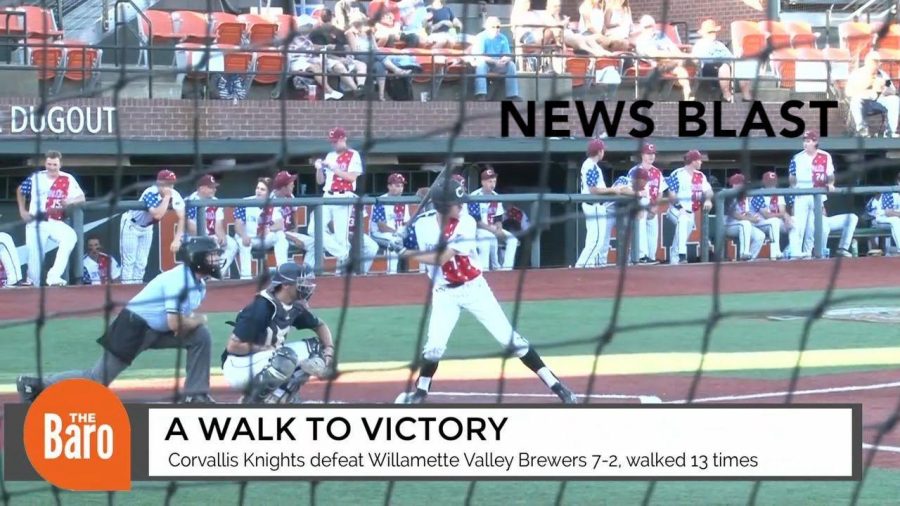 The Corvallis Knights a summer collegiate wood bat baseball team took to the diamond in a nonconference bout on Thursday at Goss Stadium, defeating the Willamette Valley Brewers 7-2.

Despite the five-run victory, the Knights struggled to execute offensively for most of the game. By the end of the sixth inning, the home team found itself behind 0-1 and had only garnered three hits. The Knights were glad recipients of many free bases. Before the seventh inning started, the Brewers issued six walks, allowed two batters to reach base on errors and hit one batter with a pitch. But even with all those free base runners, the Knights still failed to score.

“We started off slow,” Tight fielder Darren Nelson said. “We rolled into a bunch of ground balls (for outs) with runners in scoring position. I think we had four in the first five innings, which is always rough. I mean that’s one of the worst things that can happen.”

Though the Knights had early struggles on offense, starting pitcher Tanner Cantwell began the game hot, striking out five of the first eight batters he faced.

“I tried to get out there and throw as many strikes as I could and let my defense work,” Cantwell said.

Head coach Brooke Knight said he liked the way Cantwell started the game pitching. The pitcher went for four innings and only gave up one earned run.

“If he gets ahead (of the count), he’s got secondary pitches that are effective,” Knight said. “He’s just got to make sure he’s throwing enough strikes early in the count so he can get to those. When he does that, he can be pretty tough.”

Knight attributed the lack of execution to the team’s decision to use players who do not ordinarily see as much time on the field. However, he did not excuse the poor early play and said players still need to show up to compete and win.

“At the end of the day, baseball is a humbling game. And if you don’t show and get the job done, it can sneak up and bite you,” Knight said. “I was happy to see our guys compete a little better in the latter part of the game.”

In the seventh inning, the Knights equalized the game by scoring on a wild pitch en route to a five-run inning. The Brewers allowed the Knights to score a total of three runs off of wild pitches during the inning.

“That’s probably the worst way to score when you’re on the opposite team watching the pitcher do that,” Nelson said. “Just giving up free runs is brutal. There was a lot of them and we took advantage of them too. We got good reads and scored off (the wild pitches), so that was good to see.”

However, not all the runs the Knights scored in the seventh inning were free. With a runner in scoring position, Nelson hit a ball to deep center field. He initially thought it was a home run, but the big swing bounced the ball off the top of the outfield wall, and the 6-foot-8-inch pitcher hustled around the bases for a triple. Nelson said he could not recall the exact number of triples he has hit in his career, but he ended up settling on ‘not that many.’

“He’s got a quality swing and hasn’t had a ton of opportunities,” Knight said. “But when he has had a chance to swing the bat, he’s done a nice job for us. I thought he had a relatively good game and both balls he squared up were hit well. So I was happy for Darren today.”

The Knights would not score on their own accord for the rest of the game, with one run on a wild pitch and another via a walk with bases loaded. After eight innings, the Knights had increased their lead to five runs.

According to Knight, the Brewers did the Knights plenty of favors, but patience earned the team good favor and helped the team to take the win.

“If you’re not getting a pitch you can drive, you have got to be patient,” Knight said. “A walk is a productive at bat.”