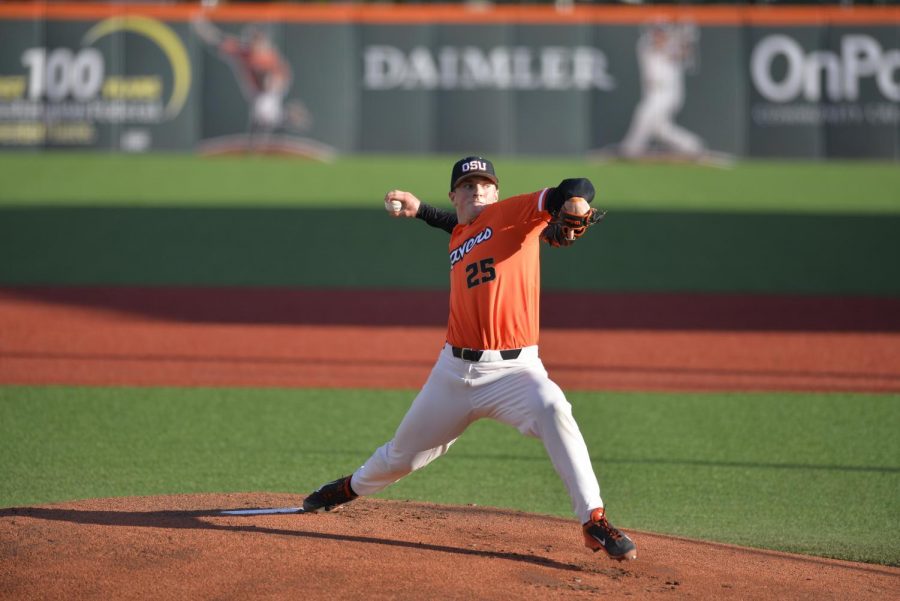 Drew Rasmussen launches a pitch toward home plate. Rasmussen pitched for four innings and only gave up one run and five hits.

Madrigal finished the regular season with a .377 batting average, tacking on four home runs, and 31 RBIs. In his 204 at-bats, Madrigal only struck out 13 times, while totaling 111 bases, including a team-high 15 steals.

Madrigal was also one of three Beavers named an All-American, along with Heimlich and junior pitcher Jake Thompson. Madrigal was named to the third team, while Thompson and Heimlich were both first team selections.

Heimlich earned the lowest ERA in the nation at 0.81, while striking out 120 batters in 111.1 innings pitched. Heimlich finished the season at 10-1 in his 15 games as the primary Friday starter for the Beavers.

“(He) deserved it,” pitching coach Nate Yeskie said. “Look at the numbers… I think the guy’s only given up nine extra base hits all year. That’s incredible.”

Thompson also pitched very well this season, finishing with a national best 12 wins and no losses. His ERA ranks third in the nation at 1.31, despite allowing four runs in a rare bad outing last weekend against Abilene Christian. Thompson finished the regular season with 96 strikeouts in 103 innings pitched, while contributing to the best team ERA in the nation at 1.84.

Casey led his squad to an impressive 49-4 regular season record, with a Pac-12 best 27 wins—a conference record. Casey also won his 1000th career game against Oregon earlier this season on the same day the Beavers clinched the Pac-12.

Jack Anderson, Cadyn Grenier, KJ Harrison, Heimlich, Madrigal and Thompson were all named to the Pac-12 All-Conference team, with Steven Kwan and Madrigal on the All-Defensive team.

For their first regional game, OSU hosted the College of the Holy Cross from Worcester, Massachusetts.

Holy Cross entered the weekend with a 23-27 overall record, reaching the regional round for the first time since 1978 by winning the Patriot League tournament. In their last two regular season contests, the Crusaders had lost both games to Yale, the No. 3 seed in the Corvallis regional.

“We’re fired up for sure,” first baseman Anthony Critelli said. “It’s been a long time coming for us, and we’re happy to be here.”

Critelli has been the Crusaders’ most productive hitter this season, boasting a .302 batting average, with a team-high nine home runs, to go along with 34 RBIs. Critelli is also a finalist for the Senior CLASS award, which recognizes a player’s accomplishments on and off the field.

However, Critelli and the Crusaders will face a serious test as they take on the best pitching staff in the nation.

“Obviously they’re a good staff, it’s going to be a challenge,” Critelli said. “We’re not going to try and do too much, we’re just going to come out here, compete and see what we can do.”

Head coach Greg Dicenzo has been able to keep up with OSU’s success throughout the season, and knows the challenge his team has this weekend.

“I’m the representative for the Patriot League on the USA Today poll,” Dicenzo said. “They’ve been getting my vote for number one for quite some time now, so pretty dialed in to how they’ve been playing.”

However, this was not Dicenzo’s first experience with Oregon State.

“I had a chance to coach a few guys in years past: Dallas Buck, Jacoby Ellsbury, down in the Cape League, but that was quite some time ago,” Dicenzo said. “Every guy we’ve ever had down there from Oregon State’s always a good kid, they work hard, they play hard, so if that’s any indication in terms of the rest of the roster, I’m sure you’ve got a roster with guys literally just like them.”

Oregon State defeated Holy Cross 8-2 Friday night. The Crusaders defeated Nebraska on Saturday, before being eliminated by Yale. You can find a full recap of Friday’s game versus OSU here.

Pitching coach Nate Yeskie said that the rotation change came with “no disrespect to Luke,” and the mentality was “playing to win one game at a time.”

“He’s in the conversation for sure,” Yeskie said. “If Ras happens to go game three, he’s a pretty good one in that slot too.”

While neither Yeskie nor Casey would announce a starter for Sunday at the time, they mentioned Drew Rasmussen as a possibility, who turned out to be the pitcher in Sunday’s victorious matchup with Yale.