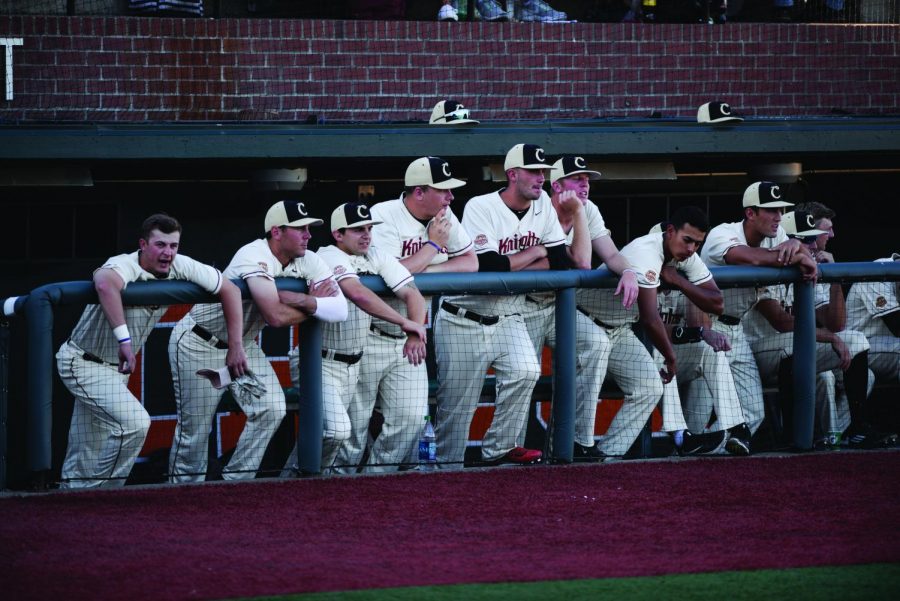 Corvallis Knights players watch their team compete against the Bellingham Bells from the dugout.

However, Corvallis Knights baseball is not just about winning. The team’s first and foremost goal is development, according to Bre Miller, the team’s president and general manager. Players from colleges and universities around the west coast and beyond come to Corvallis for the opportunity to gain greater playing time and further their baseball skills. Games are played nearly every day during the two-month season, whether at home in Corvallis or on the road against one of the team’s 10 opponents in the West Coast League.

“We want to help all of these kids get to the next level,” Miller said. “Maybe it’s a first baseman that didn’t get much playing time during spring ball (for their college team), so they send them to us to get those at bats and get that playing time.”

There are a select few players who can claim they were part of both the Corvallis Knights and the Oregon State University Beavers baseball teams. Currently, eight former Beaver-Knights have active contracts in the major or minor leagues. Among the major leaguers are Seattle Mariners pitcher Sam Gaviglio and San Francisco Giants pitchers Josh Osich and Matt Boyd.

Each year, the Corvallis Knights see a new slew of faces populating the roster. According to left-handed pitcher Chase Kaplan, having success with each season’s new set of teammates provides a lot of fun.

“The new promo slogan this year is ‘New Blood, Same Family,’” Kaplan said. “Everyone has that common goal of winning ballgames, but having fun at the same time. We kind of embrace the heat—embrace the long, sweaty tired roadtrips. We just get to know each other and love each other, but also have fun playing the game we love.”

A native of Hillsboro, Oregon, Kaplan started his collegiate baseball career at Western Nevada College, a junior college in Carson City, Nevada. During his freshman year, he decided to apply to for a Corvallis Knights roster spot. The team offered him an opportunity to show his skills with a 10-day contract, and Kaplan pitched his way onto the team. This season is Kaplan’s third as a Corvallis Knight.

“I’ve always been a Knights fan. I came to three or four games before I actually played for the Knights,” Kaplan said. “It’s an honor to play for a successful hometown team. It’s a lot of fun too.”

The Corvallis Knights have a history of success, but much of their recent prosperity can be attributed to head coach Brooke Knight and his leadership, according to Miller.

“Coach Knight, he is amazing,” Miller said. “He is a leader just by nature—take baseball out of it. Somehow he brings these kids together and makes them think about ‘we before me.’”

Knight began his Corvallis Knights career as a player when the team was located in Beaverton, Oregon, in the early 1990s, while he was also playing baseball and football for Oregon State. He began his managing tenure in 2008 and immediately experienced success, winning the league championship as a rookie manager before winning it again in 2011, 2013 and 2016.

Whether developing relationships or baseball skills, the aspect of winning should not be forgotten, according to Knight. As a coach, he believes in the importance of balancing victories and players’ improvement.

According to Knight, the relationship between a player and the coaching staff is the root of a player’s improvement.

“It’s just a matter, for me, of treating every player with respect,” Knight said. “And likewise we would hope that the players treat their teammates and their coaching staff with respect. You’ve got to have that first and foremost. Once you have that respect and that trust, I think you have a chance to do something special.”

It takes more than a team of players and a coaching staff to attain success. The Corvallis Knights offer internships for students across the country who are looking for experience in a multitude of areas, whether that be in sports marketing, management, media and more. The interns are some of the people who put in the effort to supply a quality product to the Corvallis community.

“We’re lucky,” Miller said. “I say it every year, but I really think, off the field, our interns are just a great group of students. They’re from Oregon State, University of Oregon, Washington State, New Jersey. Our on-field host is from North Carolina.”

According to Miller, the Corvallis Knights can provide an affordable family entertainment option for the Corvallis community. Home games are played in OSU’s Goss Stadium, and tickets are $6 if pre-ordered and $7 at the gate. Throughout the summer, special promotions—such as fireworks nights—take place to increase entertainment value.

In his career, Knight has been around a lot of baseball and baseball settings, ranging as far away as Australia, where he coached both on the professional and club level. He described the environment of Goss Stadium as phenomenal and said the ballpark is reason enough to attend a game.

“Obviously we play at arguably the best venue on the west coast,” Knight said. “We are very fortunate to play here and have a partnership with Oregon State.”

“There’s no place I’d rather be, these summers are something I don’t take for granted,” Knight said.