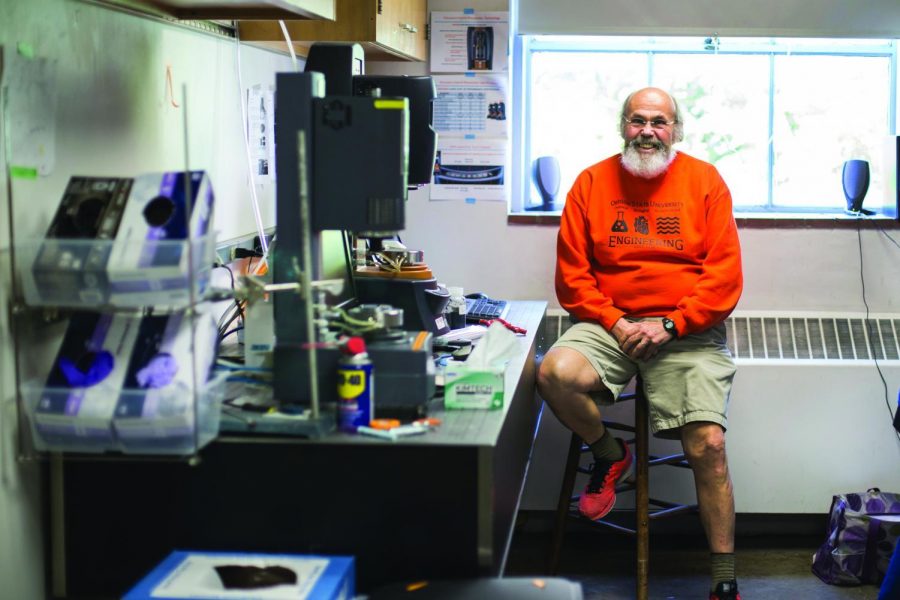 Oregon State Associate Professor Skip Rochefort sitting on a stool in his laboratory. Professor Rochefort is helping to develop a more inclusive environment in undergraduate research at Oregon State.

According to Skip Rochefort, an associate professor of chemical engineering at Oregon State University, new ideas spring from the imaginations of individuals with different backgrounds, perspectives and lifestyles.

Though the gap in research diversity at OSU has dramatically decreased over the last few decades, there is still a push to change these demographics, according to Rochefort.

“Women in science has grown substantially in the last 20 years, and currently we are at just about 20 percent women in the College of Engineering,” Rochefort said via email. “But in my School of CBEE (Chemical, Biological and Environmental Engineering), we had 34 percent women in our 2017 graduating class—so we have made some gains here. However, we are still well below the demographics of the state.”

Sujaya Rao, the director of undergraduate research at OSU, is another faculty member working to change the dynamics of OSU research.

“My job is to help include students who aren’t ‘typical beneficiaries,’” Rao said.

According to Rao, typical beneficiaries in research at OSU are generally high-achieving third- and fourth-year students in science, technology, engineering and mathematics, commonly known as STEM.

Rao said she would like to focus on giving research opportunities to low-income first- and second-year students that come from traditionally underrepresented racial or ethnic groups, as well as first-generation students and students in the humanities, social sciences and arts.

Giving a wider range of students access to research projects grants those students opportunities to increase their self-confidence and enhance their skills in critical thinking and problem solving, according to Rao.

OSU is not the only institution seeking to diversify its research base. Earlier this year, from January 25-28, Rao helped put together a round-table discussion titled ‘Inclusiveness in Undergraduate Research: Advancing Access in Non-Traditional Ways’ at an American Association of Colleges and Universities meeting in San Francisco. This discussion sought to bring attention to the imbalance in research engagement across academic majors and across various student demographics and sought to encourage professors and students to become involved in all-inclusive research projects.

Rochefort is helping to make this vision come true at OSU by including a program in his research known as Saturday Academy Apprenticeships in Science and Engineering, which takes high school students and integrates them into the researching community.

Leah Hanen, a second-year pre-mechanical engineering student at OSU, worked in Rochefort’s lab when she was 17 years old. According to Hanen, she was not sure what major she wanted to go into after high school, but she knew she was interested in engineering. The project she worked on during the summer of 2015 was recycling failed 3D prints.

According to Hanen, when a 3D object is printed, there is excess material on the base known as ‘raft material’ which acts as a support system for the object being printed. However, once an object is printed, this material is no longer needed. Hanen and her peers were presented with the challenge of coming up with a way to take the raft material, recycle it and make new filament. Hanen said this filament is the equivalent of ink for a standard printer.

“One of the coolest days was (when) we were able to print a recycled 3D Yoda for Skip,” Hanen said. “He was so excited, he went to go show the graduate class he was teaching.”

Hanen worked with Rochefort during her first couple of weeks in the lab.

“He made the lab so inclusive and just really welcoming,” Hanen said.

Another way Rochefort supports Rao’s passion of inclusivity is by creating research projects that can be accomplished by college students with only moderate STEM knowledge. In doing this, he develops projects that students may be interested in—even if the projects do not fall within the students’ areas of study. This is meant to allow students to gain experience with projects they might want to pursue later in their college careers.

Undergraduate students can also work on projects that become the equivalent of full-time jobs, according to Rochefort. While some students work on smaller projects, like the recycled plastic Yoda figure, others work on larger projects under much stricter deadlines. One example of these large-scale projects is ‘The Gel Burn Project’.

Rochefort had his own way of describing the materials that go into making the gel.

The mix in question is an organic construction of different herbs that have been discovered to form a hydrogel that can heal second- and third-degree burns. The goal of ‘The Gel Burn Project’ is to have OSU students create gel patches that will slowly release ‘magic mix’ as they are worn over time. According to Rochefort, these patches are wanted by kitchen workers and cooks who may be getting burned regularly and need an efficient way to heal their injuries.

Projects like this give a variety of students opportunities to develop themselves and their careers, according to Rochefort.

“Diversity of thought is the key to innovation and that comes with a diversity of backgrounds,” Rochefort said. “We need a diversity of solutions to address the world’s problems, and we won’t get that if we only have white males of similar backgrounds looking for solutions.”