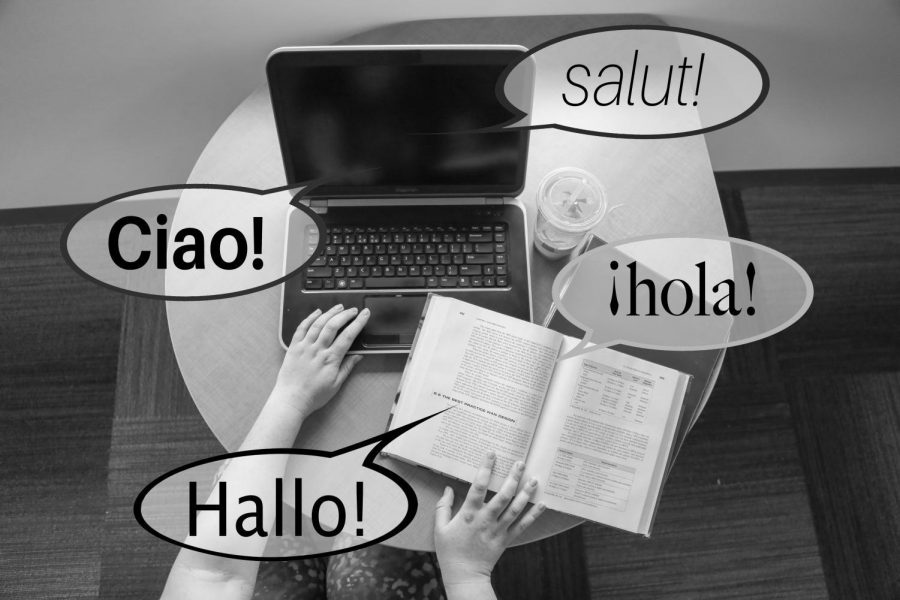 Spanish, German and French are the most popular language classes at OSU, according to Juan Antonia Trujillo, the coordinator for world languages and cultures in the School of Language, Culture and Society. The World Languages and Culture program will undergo many changes, such as moving several courses onto Ecampus.

Next year, Oregon State University will be undergoing some changes in their language department.

While there are multiple different ways to say hello, there are just as many ways to say goodbye. This next academic year, OSU will be saying goodbye to a small handful of second-language course opportunities that have previously been offered either on campus or by the Ecampus.

One change that will be observed pertains to Oregon State’s Italian language courses. First-year Italian instruction will be making the switch from a face-to-face classroom environment to being available only in an Ecampus setting. While this change has already occurred for the second-year Italian courses, this will be the first time that all levels of Italian courses will only be offered completely online.

Oregon State will also be phasing out several Ecampus-only language courses due to their low enrollment numbers. These changes will be seen in Arabic, Hebrew, Latin and Russian courses. Hebrew and Latin have not been taught face-to-face at all in recent OSU history.

In an email correspondence with Juan Antonio Trujillo, the coordinator for world languages and cultures in the School of Language, Culture and Society, he stated that some of the reasons behind these changes are attributed to a desire to make the best use of limited resources to guarantee better excellence in instruction and more reliable access to students needing to meet degree requirements.

“We chose to focus on the languages that are most widely spoken in the region that are used by our most important trade partners, and that have strong enrollment trends across the country,” Trujillo said. “We will be redirecting resources from the under-enrolled languages to American Sign Language, Japanese, Chinese and Korean.”

The World Languages and Cultures program has been in a transformative period for many years now, primarily in terms of becoming a part of the School of Language, Culture and Society. This has provided many opportunities for cross-disciplinary collaboration with programs like Ethnic Studies and Women, Gender and Sexuality Studies.

“Implementing a new vision does require change, however, especially when resources are limited,” Trujillo stated. “The OSU administration has been encouraging us for several years to identify our potential areas of excellence and redirect our resources to those languages—in fact, we were told explicitly in 2010 that we need to cut some languages.”

According to Trujillo, Spanish, German and French continue to stand as the most popular languages of study for OSU students, ensuring their continuous development as courses.

Trujillo claims that the more difficult question to answer was: “How to choose from what are known as Less Commonly Taught Languages (LCTLs)?”

The Department of Defense maintains a list of strategic languages for national security, and UNESCO (The United Nations Educational, Scientific and Cultural Organization) publishes a list of some of the most economically useful languages worldwide.

These lists were examined to aid in these departmental-change decisions. Other factors such as the size of each language community in Oregon and the state’s leading import/export partners also had a stake in this decision.

Trujillo encourages students to look at the American Academy of Arts and Sciences’ report that was recently released to gain a better perspective on the national studies that reflect a decline in these language studies.

Marfa Levine is an OSU student who has been protesting these changes. Levine has started a petition in favor of a second-year language course in Italian on campus that has been signed by many of her fellow students, and has sent a copy to whomever might take heed of it.

According to Levine, she wants to see change in regards to these classes.

“There is some annoyance, and feelings of misguidance as far as how we are educating people,” Levine said.

Levine expressed her frustration with online language courses, and says she enjoys learning language courses in a face-to-face environment. She feels much more relaxed working with people, as opposed to a computer and camera.

She also claims that the interactions between her and the members of the classroom aid in her learning ability.

“We have a campus because the interactions are valuable,” Levine said.

Sebastian Heiduschke, an associate professor for the College of Liberal Arts for German courses, wanted to reiterate that these changes are not as simple as moving the langauge courses to an online-only format. He claimed that there are a multitude of reasons supporting the change in these programs.

Additionally, if a student is determined enough to learn a language, they will learn the language regardless of the format, according to Heiduschke.

“I recommend that you take a language while you are still in school, and I guarantee you that you will land a job once you graduate,” Heiduschke said.

In addition to these changes to the language courses, one of the biggest changes in the works is a brand-new language degree. Trujillo says the Bachelors of Arts in World Languages and Cultures degree will help students to broaden their comprehension of current societal communication.

Some aspects of communication in today’s society include attributes such as images and sounds that are woven into speech and text, and where people’s identities and language choices don’t fit neatly into national boundaries. This degree has been created in an effort to highlight these attributes.