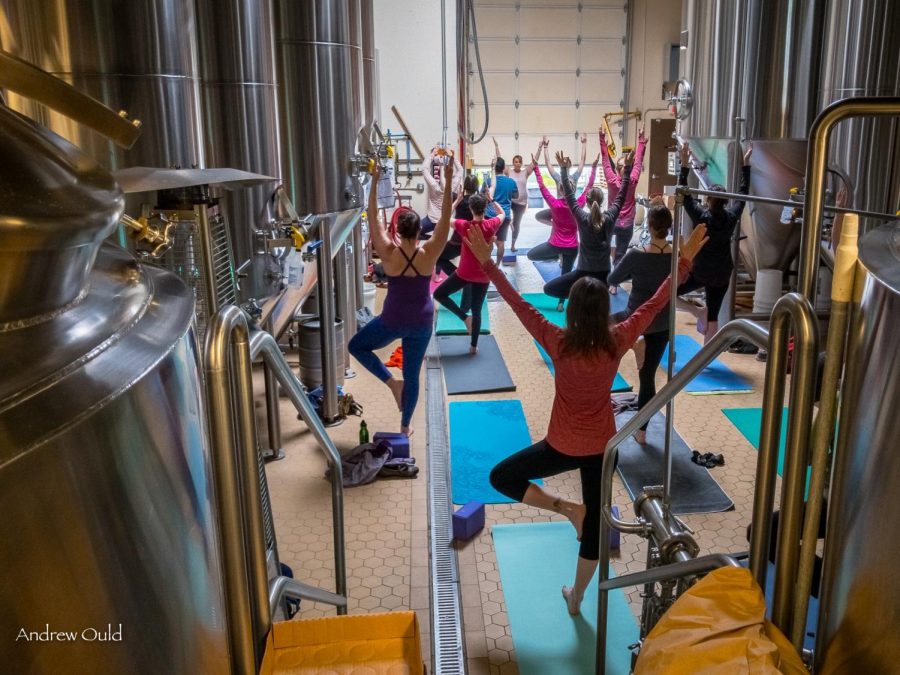 Beer yoga participants stand in the tree pose in the Mazama Brewing taproom.

Mac and cheese, Batman and Robin, chips and guac; all of which are made better by their counterparts. Can the same be said for beer and yoga?

Beer yoga is a fun way of experiencing the benefits of yoga in a stress-free, familiar environment. Students of drinking age and locals alike can participate in yoga classes while enjoying a cold beverage. There are many taphouses and breweries that host yoga classes all across town.

“We wanted students who may be intimidated by a class in a studio to experience yoga in a relaxed setting,” Gill said.

Being a Southtown resident, Gill often frequented Block 15 Brewery and Taproom. After finishing her yoga teacher training in May 2016, she was inspired her to combine her two passions: beer and yoga.

“The inspiration behind the class was simply this: to bring people together through yoga and beer on a warm summer day in a beautiful setting,” Gill said.

Students can easily find motivation to go to a warm afternoon class where drinking beer is welcome and encouraged, unlike early morning yoga classes at Oregon State University.

This relaxed setting, Gill mentions, is made possible by the atmosphere naturally present in craft breweries. The craft beer culture is conducive to trying new things, whether that be a new type of beer or exercise activity.

So what exactly is Yoga On Tap?

“(Yoga On Tap) is a relaxed, not-intense yoga, so if you wanted to grab a beer prior to starting a class, that’s the idea. It’s meant to be lower-key and less intense,” said Kristen Gaylor, Block 15 taproom manager.

No need to worry about broken glass; beer yoga in Corvallis is done with plastic cups or cans that participants sip on throughout the exercises.

Unlike other locations, yoga sessions at 2 Town Ciderhouse are free to the public. This means there is no better opportunity to try yoga!

“It’s an awesome opportunity to contribute to the Corvallis community,” Cravens said.

Beyond beer and cider, Lumos Winery, located outside Philomath, offers yoga sessions to patrons who would prefer wine. According to Gill, Lumos Winery is one of the most picturesque settings in the Willamette valley.

“I think it goes back to what’s unique to Oregon and the Willamette Valley,“ Gill said. “We’re combining yoga with the natural sense of community that Oregonian’s find in our local breweries and wineries, bringing people together who may not practice yoga, to a space where they feel comfortable enough to give it a try.”