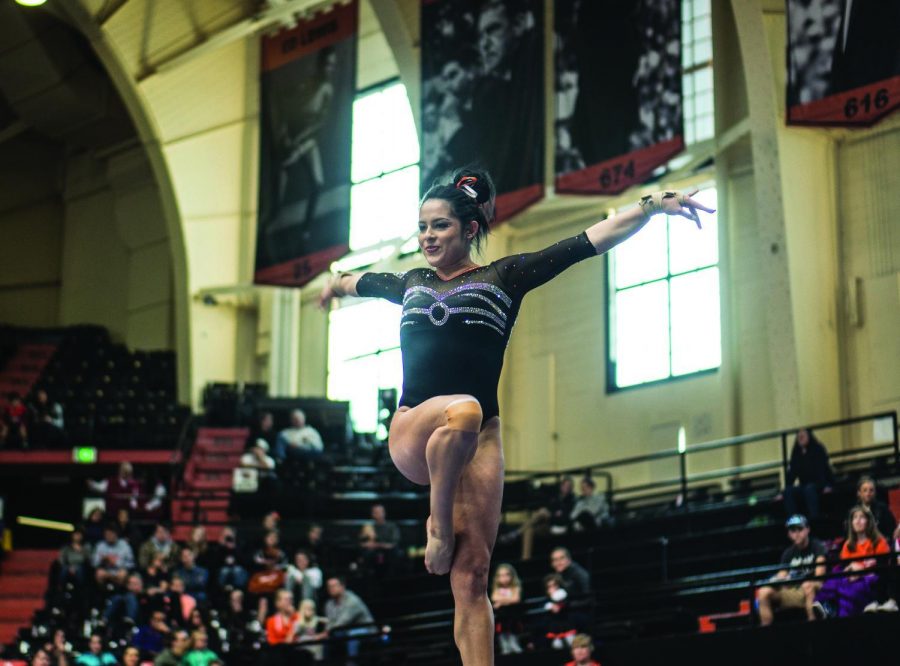 Megan Jimenez performs on beam during a March 5 meet against Washington.

From the age of three, Megan Jimenez has had one focus and passion: gymnastics. 19 years ago, Megan Jimenez accompanied her mother to her brother’s first gymnastics class. At first, she was shy and scared, but once she built the courage to venture away from her mother’s hand, the future Beaver gymnast was ignited.

“As soon as Megan saw the gymnastics equipment, she let go of my hand and continued to move forward. From day one, we knew she had found a passion,” Mary Jimenez, Megan Jimenez’s mother, said. “She was really strong at a young age and she flew through all the levels.”

Megan competed on the vault and floor early in her college days and the beam in her later career. She competed in 46 out of 49 career meets and ‘hit’ 63 out of 66 routines in her career. She also received PAC-12 All-Academic Honorable Mentions three out of four years at OSU.

Megan is graduating this year with a degree in Digital Communication Arts, with which she plans to pursue a career in the media. She is retiring from her life-long career and passion, gymnastics. After graduation she is moving to Atlanta, Georgia with her boyfriend and former Beaver offensive lineman, Sean Harlow, as he begins his professional football career with the Atlanta Falcons.

“I have a lot of media experience and I have done a lot with media, but it is just tough figuring out that perfect fit of what I think I am going to be good at,” Megan said. “I have yet to find that perfect match that I know is exactly what I want to do.”

Taylor Ricci, a senior majoring in exercise and sports science, met Megan on their first official visit to the campus and they have stuck together ever since, whether they are at practice, in the weight room, or just relaxing.

“I expect very bright things for that girl’s future,” Ricci said.  “She has worked incredibly hard. For all of us girls, gymnastics has been our lives for 17 or 18 years, so closing that chapter is going to be a transition, but she has her eye’s set on what she wants to do and what she wants to accomplish and she has that passion behind it,” Ricci said.

Megan was recruited as an all-around because she could compete on every apparatus, however her limits were pushed with several knee injuries throughout her career. The hard impact of the landings in gymnastics can take a toll on one’s body.

“It is hard to see your daughter suffer those types of injuries and watch her push through even though she is in pain, but Megan and I share the same mental toughness; it’s a characteristic that she has always had and it helped her fight through when everything seemed to be going wrong,” Mary said.

Mary has been teaching elementary school for 29 years. She helps kids every day find their potential just as she did with her own. Mary Jimenez tried to get to as many of Megan Jimenez’s competitions, whether they were at OSU or if they were traveling from her home in Temecula, Calif.

“These four years have blown by and it is bittersweet,” Mary Jimenez said. “It’s hard to say goodbye to gymnastics because it has been Megan’s passion for years, but she is strong and she is the driving force behind all her decisions and if she is happy then I am happy.”