The Daily Barometer • May 1, 2017 • https://dailybaro.orangemedianetwork.com/8271/daily-barometer-news/osu-board-of-trustees-votes-to-raise-tuition-for-2017-18-academic-year/ 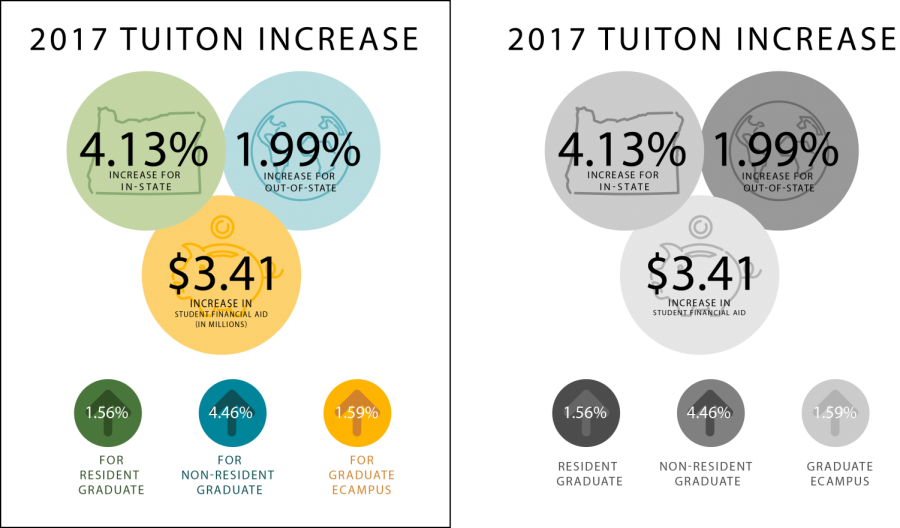 The data for this graphic was sourced from the April 21 meeting agenda.

In a near-unanimous vote, the Oregon State University Board of Trustees voted to raise tuition by roughly four percent for in-state undergraduate students and close to two percent for out-of-state undergraduate students for the 2017-18 academic year. The long-awaited meeting, held on April 21, featured discussion on the impact of the increase on students and the need for more funding from the state government.

Oregon Gov. Kate Brown’s proposed budget for the 2017-19 biennium does not contain an increase in funding for higher education, despite calls from Oregon’s seven public university presidents, including OSU President Ed Ray, for an increase of $100 million. Vice President of University Relations and Marketing Steve Clark explained that attempts by OSU’s administration to lobby the state government for the requested $100 million are ongoing, and have been taking place since before this year’s legislative session began in early February.

“Yesterday, there was an entire contingent of Oregon State representatives at the capital throughout the entire day, including students, meeting with every legislator,” Clark said. “Oregon’s seven university presidents continue to work collaboratively to stress that the state needs to increase funding for higher education and to request the additional $100 milion dollars that’s been asked for.”

Despite these efforts, Oregon’s public universities have so far been unable to secure an increase in state funding.

Many members of the Board expressed concerns for the financial burden the tuition increase would place on students, including Board Chair Patricia Reser, but ultimately voted in favor of the resolution. The single dissenting voice on the Board who voted against the increase was Student Trustee and Associated Students of Oregon State University Vice President Brett Morgan.

According to Morgan, his reason for voting against the rest of the Board involved putting himself in the shoes of his younger self coming to OSU four years ago.

“Like many students that start here, I was full of passion and idealism about how I could make this campus a better place,” Morgan said in an email. “Since my first day here at OSU, I have probably missed close to a month of cumulative class testifying and advocating for students. Why mention this? I often wonder if my efforts to be pragmatic stain my idealistic side, the very side that helped me to coordinate rallies and lobbied endless legislators to benefit students. So from this, in obligation to this mindset and in my obligation to students, I felt I could not, in good faith, vote to increase tuition.”

“While I cannot speak for the Board as a whole and its decision, an increase of 4 percent still means the university is forced to find more than $20 million in cuts due to the state choosing to flat fund higher education,” Morgan said via email. “The problems the Board faces are not from issues at Oregon State, but rather from the state of Oregon—and those issues don’t look like they’re going to change any time soon.”

According to Clark, increases in tuition could be limited if the legislature did make a change in their funding for higher education.

“We will continue to reduce expenditures at Oregon State because we cannot be confident that the legislature will increase the Governor’s budget. Those cuts are estimated to be in the range of $20 million annually for the next two years,” Clark said. “We have been instructed—every dean, every department head, every administrator of the university, to reduce our expenditures for next year by up to four percent. So we are going to reduce what we call education and general expenditures, those that involve state funds and tuition by 4 percent next year.”

Within the state legislature, Sen. Sara Gelser of Senate District 8 is working to increase funding for higher education, as well as other projects including health and human services.

“The challenge is getting revenue for anything right now. We are facing a nearly $2 billion shortfall, about $1.8 billion, and there is not a single budget that is adequately funded,” Gelser said. “Without new revenue, it (the $100 million ask) cannot come to fruition, so we all need to work together to get additional revenue.”

According to Gelser, she is currently working on increasing revenue for the biennium.

“My desire is that we have a revenue package that allows us to do what we need to do to keep kids and seniors and people with disabilities safe,” Gelser said. “To have appropriate opportunities for kids and early childhood and K-12, and to have really strong university and community college programs that don’t require students to face massive tuition increases. College is already unaffordable enough and the burden that all of you will face, if we aren’t able to boost what’s proposed right now for higher education, is untenable.”

At the university level, there are programs in place to attempt to assist students with financial needs who will be impacted the most by the tuition increase, according to Clark.

“(The university) is providing stop-gap funds to students,” Clark said. “Last year when these programs were put into effect, we know there were a number of students who possibly in their winter or spring term were impacted by the cost of attending the university. Not just because of tuition, necessarily, but because of all financial circumstances. These funds, provided by colleges (and) by the OSU Foundation, aided hundreds of students in meaningful ways, enabling some to remain in school.”

Whatever their financial circumstances, according to Morgan, student voices are being heard by the Board of Trustees.

“Maybe not in the ways students want, but they’re being heard,” Morgan said. “OSU’s choice to internalize and minimize the impacts of OSU’s revenue shortfall from the state away from students is a conscious choice that arises from stories of students and their concerns, so while to many this may not feel like a victory, students should know that their voices are not falling on deaf ears.”