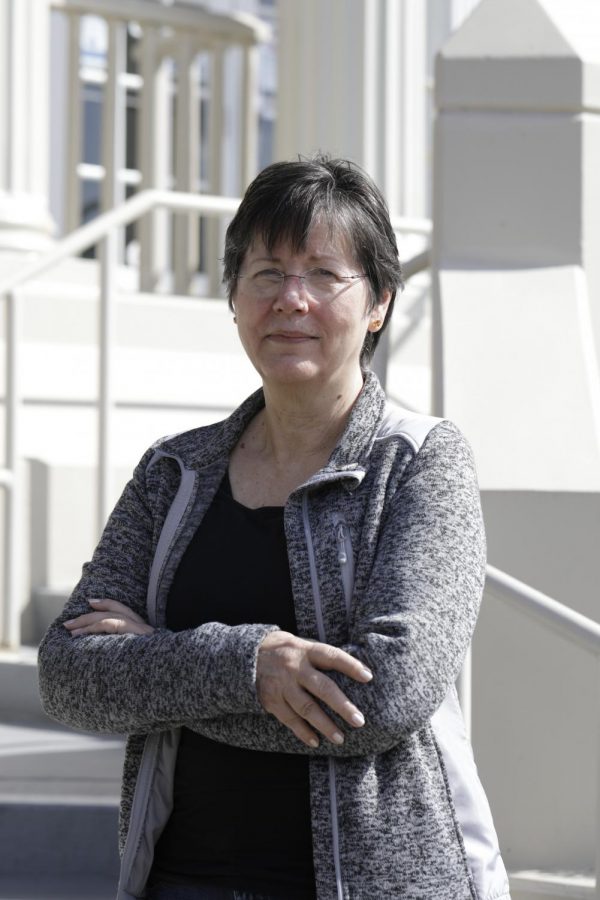 Member of the Corvallis Planning Commission and former City Councilor, Penny York, stands on the front steps of City Hall. Having been an active member of the Corvallis community for many years, she also served as director of Linn-Benton Community College from 1998 to 2007, during which time the college underwent significant expansion.

In 1994, Corvallis saw its first female mayor with Helen Berg and since that time Corvallis has seen more women enter local leadership and speak up for accessible and equitable leadership.

Following Helen Berg’s term, Julie Manning was elected mayor of Corvallis and served from 2010 to 2014. During her time as Mayor, Manning earned the Award of Merit from the Oregon Mayors’ Association.

Manning studied at Lewis & Clark college to earn her bachelor’s degree in communications and later earned a masters in print journalism at Boston University in 1982. After graduating from Boston University, Manning started to work with the Governor’s office as a press secretary.

Manning learned about local leadership initially from a program called Leadership Corvallis, which focused on a new community issue each month.

“Beginning in the late 1980’s early 1990’s I had the opportunity to do some volunteer leadership positions with the City of Corvallis,” said Manning. “[Then Helen Berg] asked me to chair the vision committee for [Corvallis].”

After Berg decided to not run for reelection, Manning was approached by community members about running for Mayor and was elected in 2010.

“Leaders really need to be courageous, if you’re at the front of the line that’s a scary and vulnerable place to be,” Manning said. “You’re not always going to be right but ultimately you have to have the confidence and courage to feel that you can facilitate coming to a decision that people can feel good about.”

Today Manning serves on OSU’s Board of Trustees along with her job at Samaritan. When at Linn Benton Community College, Manning met Penny York, another community leader in Corvallis who was also previously an OSU board member. York also served with the Corvallis City Council from 2013 to 2019 and graduated from OSU with a doctorate in education in 2001.

York came to Corvallis from Southern California and has a master’s in counseling at California State University. York said she got into leadership after sending a letter to the editor in Pasadena.

“I was upset because there [were] big Fourth of July fireworks at the Rose Bowl and there were a bunch of people driving in our neighborhood [and] it was bone dry,” York said. “So I wrote a letter to the editor, and then the president of our neighborhood association called and said you need to serve on our board.”

York said at first she did not think she was capable of taking on a leadership role but when someone told her she could do it, that was enough to push her over the edge and take on the opportunity.

“When I started on the Rose Bowl operating company board [it was] a man’s world, a football stadium and an internationally known football stadium,” York said. “There was one other woman on the board, I felt pretty much like a token and I was there because I was representing my neighborhood.”

York said women had a harder time being heard, because a woman’s voice wasn’t seen as important. Today, York says the problem is getting young women into public leadership positions.

“In the past there were more retired people on the city council,” York said. “What I heard from the young women was [they] have a family, [they] have a job, it just takes so much time to do it.”

York also asked young men why they didn’t run for council and they often said they were just not currently interested in running and that they have different goals.

“They didn’t seem constrained by other responsibilities,” York said. “Other men in leadership helped younger men into leadership.”

York believes to pull up those around you, it is important to recognize people’s efforts involved so they feel heard and appreciated. She said that extra call out can mean a lot to a young leader and give them the courage to speak up.

“Men and women, people of color, people who come from less backgrounds, they need to have people notice when they do something well and speak out about it,” York said.

Recognizing peoples efforts and speaking up for others and yourself is something that is important to York. While she was a counselor in Pasadena, she had to deal with another counselor that was making her and others at the community college uncomfortable.

“Every few months he would say something a little over the line, and he would tickle me and [that is] really offensive to have somebody touch your body even if it isn’t in a sexual way,” York said. “It happened again one time, and a little while later one of the other counselors [said] can I talk to you privately.”

The other counselor said she saw what happened and mentioned the male counselor was doing similar things to her, so York confronted him. York told him if he touched her again, she would file a formal complaint and he understood, after that he didn’t touch anyone else.

“When you see something like that and you can do something about it, you really have to stand up,” York said.

OSU’s Associate Director of the Office of Admissions Natalie Rooney, is another Corvallis community leader and believes women deserve a seat at the table. Like York, Rooney also believes making equitable access to leadership looks like bringing people up from different places.

Rooney grew up a leader and says her younger sister can attest to that, but she feels she first got a chance at real leadership in college while leading peers. Rooney was also influenced heavily by other female leaders throughout her life.

“I [want] to acknowledge the people who have given me opportunities to serve as a leader,” Rooney said. “Coincidentally, some of the most significant leaders I’ve worked with in my own life have been women. My first boss when I was a campus tour guide, LeAnn Stroupe, taught me so many foundational leadership skills and supported me through some tough times in college.”

With everything Rooney has learned about leadership she said that it is important to extend care and empathy to the people you lead.

“I will always have high expectations for the group to meet, but if I don’t show up every day expressing care for each individual, treating them as a person first before an employee or a group member, I’ve failed as a leader,” Rooney said.

Equitable access to leadership is going somewhere but there are still gains to be made in terms of accessible leadership.

“For women especially, we deserve more seats at the proverbial table, especially BIPOC women and trans women who are rarely invited to this table,” Rooney said. “Not only do all women deserve a seat at the table, but they also deserve to be heard, understood and their ideas and perspectives should be welcomed and valued.”