The Daily Barometer • May 2, 2017 • https://dailybaro.orangemedianetwork.com/8295/daily-barometer-news/osu-steel-bridge-and-concrete-canoe-teams-bring-home-honors/ 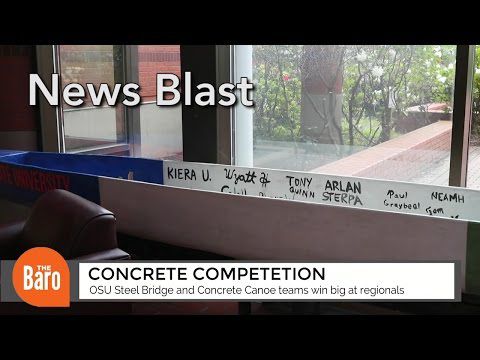 Oregon State University is home to a multitude of sports, clubs and competitions that allow students to excel and grow in their respective activities. One of the less publicized teams did incredibly well in their latest competition.

Each year, the American Society of Civil Engineers chapter at OSU gear up for two main competitions: Steel Bridge and Concrete Canoe. Each team is responsible for their project, which can take several months to complete.

The Steel Bridge team is tasked with designing a lightweight bridge that will weigh a little over 100 pounds, but can support up to 2,000 pounds when fully constructed.

The Steel Bridge team works relentlessly to remove weight from the bridge and to improve functionality and versatility. After the team finalizes their design, they continually challenge themselves to construct the bridge in as little time as possible.

“Members must know how to weld and/or construct the bridge quickly,” Cody Beairsto, the president of the student chapter of the American Society of Engineers at Oregon State, said. “By the time it’s all said and done, the bridge usually weighs just over a hundred pounds and can hold well above 2,000 pounds in some of the worst scenarios.”

On game day, this group of engineers will be timed in the construction, welding and weight capacity of their bridge. In their last competition, the Oregon State Steel Bridge Team placed third in the conference, earning a spot at the National Student Steel Bridge Competition (NSSBC), which will be hosted at Oregon State on May 26.

The concrete used by the Concrete Canoe team is different from the concrete used on a daily basis. The engineers on this team are challenged to create an ultra-lightweight concrete mix to be used in the design, constructruction and racing components of the competition.

This specific type of concrete is even lighter than water, giving it the buoyancy it needs to support itself and its crew in the heat of the race. The team must construct the canoe in such a way that it will be able to cut and glide through the water towards the finish line. This project also has a designated day set by the team for the entire construction of their canoe.

Beairsto runs the chapter and helps the teams achieve the success they all strive for. Over the past three years, Beairsto has worked on both teams, which have become a huge part of his life. With much excitement, he is ready for the teams’ next competitions.

An associate professor in the School of Civil and Construction Engineering, Dr. Thomas H. Miller, is the faculty advisor for the chapter and has been a part of the team for 25 years.

“The chapter is student-run. I offer advice, encouragement and help in fundraising,” Miller said. “There is tons of competition and (it) has only gotten more competitive over the years.”

Miller has seen all of the ups and downs of the team and has watched as the chapter has progressively grown and become more consistent in their work.

“This gives hands on experience,” Miller said. “They have to know how to make the changes needed as they go. The members learn communication skills and it all comes down to trial and error.”

At the upcoming NSSBC in late May, Oregon State will be expecting 600 people from 60 or more schools to be in attendance. The team has traveled across the nation to compete and now they have the honor to host a competition where they have home field advantage.