The Daily Barometer • May 30, 2017 • https://dailybaro.orangemedianetwork.com/8298/daily-barometer-news/osu-works-to-reduce-high-risk-alcohol-use/ 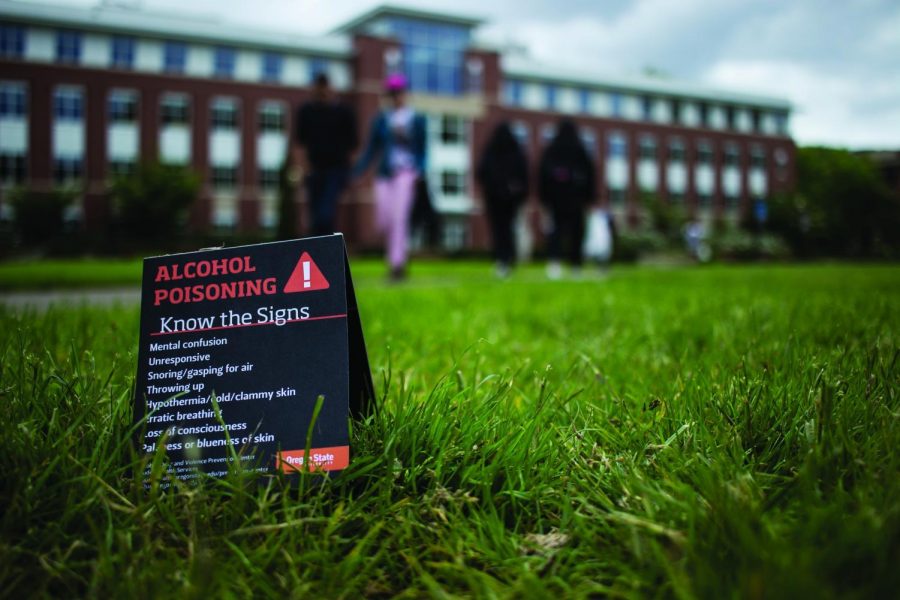 A detailed list of alcohol safety-related resources is available on the OSU Student Health Services website under the Prevention tab.

Imagine you are an Oregon State University student sitting between two people in a classroom. Look to your left, then to your right. Statistically, at least one of you has engaged in high-risk alcohol use within the past two weeks. Of students who consume alcohol at OSU, 40 percent have, according to a 2014 survey by the American

Because of the presence of these kinds of drinking behaviors in OSU students, OSU actively works toward educating students about safe drinking habits and supporting the students who choose not to drink, according to John Ruyak, an alcohol, drug and recovery specialist with OSU

“We want to help students succeed at OSU, so we work to create supportive environments. I am also focused on supporting students who abstain from substance use, especially those who are in recovery from a substance use disorder,” Ruyak said. “Often, these students find it difficult to feel supported on a traditional college campus. Oregon State University does a great job at

According to the SHS Survey Data website, there is a large population of OSU students who drink. However, 29.9 percent of students surveyed chose not to drink or had not drunk in the last 30 days. OSU works toward ensuring students do not feel pressured to drink or engage in unsafe behaviors, according to Ruyak.

Out of the 70.1 percent of students who do consume alcohol, 40 percent of these students are drinking in a “high-risk” manner, according to the SHS Survey Data website.

“High-risk is defined as five or more drinks in a single setting over the past two weeks,” the SHS Survey Data website stated.

According to Ruyak, throughout the nation, universities and colleges have been working towards reducing high-risk alcohol use.

In addition to SHS, the OSU Office of Student Life works toward educating students on safe drinking behaviors, according to Jonathan Stoll, the interim assistant dean of student life and director of corvallis community relations.

“From a community standpoint when talking about high-risk drinking or binge drinking, that puts them (students) in danger,” Stoll said. “You want people to be safe.”

According to the National Institute on Alcohol Abuse and Alcoholism (NIAAA) website, binge drinking is the act of consuming alcohol to the point at which one’s blood alcohol concentration (BAC) levels reach 0.08 grams of alcohol per deciliter (g/dL) of blood. For men, this most often occurs after five drinks within a period of two hours, and for women four drinks in the same period of time.

Binge drinking can lead to car crashes, violence, the spread of sexually-transmitted diseases, unplanned pregnancies and more, according to the Centers for Disease Control and Prevention (CDC) website. At OSU 40.3 percent of students who drank alcohol in the past 12 months did something they later regretted, 21.9 percent had unprotected sex and 18.6 percent physically injured themselves, according to the SHS Survey Data website.

“Continuing to drink despite clear signs of significant impairments can result in a potentially deadly type of overdose called alcohol poisoning,” stated on the NIAAA website. “Alcohol poisoning occurs when there is so much alcohol in the bloodstream that areas of the brain controlling basic life-support functions.”

If any of the signs of alcohol poisoning are present in an individual you should call 911, according to the NIAAA.

“Rapid binge drinking is especially dangerous because the victim can drink a fatal dose before losing consciousness,” the NIAAA website stated. “It is dangerous to assume that an unconscious person will be fine by sleeping it off.”

One way OSU has educated students about the dangers of binge drinking is through the program “AlcoholEDU.”

“AlcoholEDU is an interactive course that focuses on the impact alcohol has on your wellness, academic success and personal development. AlcoholEdu empowers students to make well-informed decisions about alcohol,” the OSU AlcoholEDU website said. “This program is not a lecture or a ‘just say no’ program, but rather a program that gives you the information you need to be safe and make informed choices with alcohol.”

According to fourth year student Jacob Rauvola, he believes the university should increase campus awareness related to alcohol consumption.

Another resource available to students at OSU is “E-checkup to Go,” according to Ruyak.

“(E-checkup to Go is) a free online and anonymous resource available to all students who want to get personalized feedback on their alcohol use,” Ruyak said. “Over 2,400 OSU students have participated in campus workshops that go into greater depths from the education

There are also numerous resources available 24/7 on the OSU SHS website under the Prevention tab.

“We are all members of the Corvallis community, and I think it is important to be good neighbors because we all live here,” Stoll said. “I think often times I would suspect, people are buy in large good neighbors. But when you involved alcohol that changes the dynamic. They are more prone to speak and yell loudly outside, and disrupt the community.”