The Daily Barometer • May 1, 2017 • https://dailybaro.orangemedianetwork.com/8332/daily-barometer-news/lack-of-women-in-stem-majors-at-osu-apparent/

Lack of women in STEM majors at OSU apparent 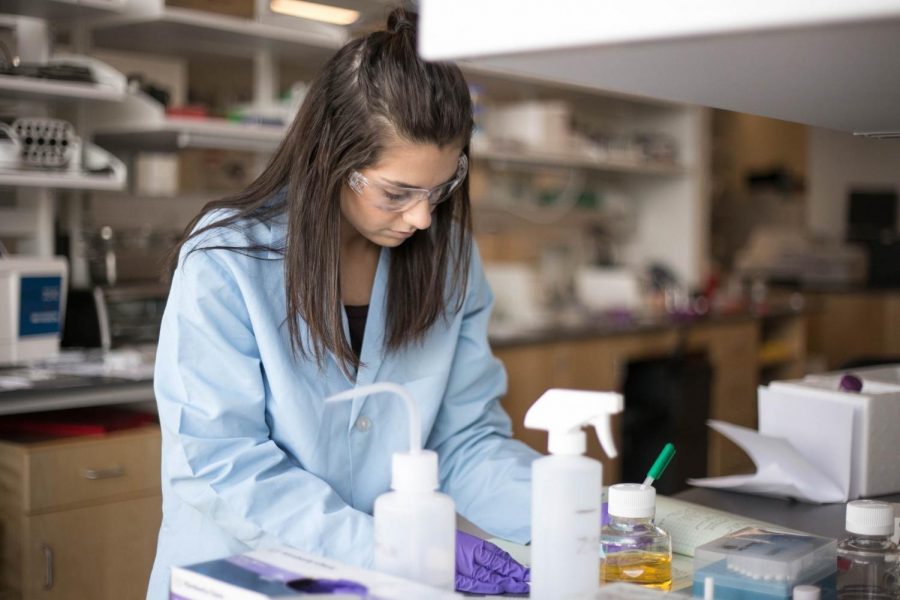 Undergraduate researcher Amy Olyaei writes down observations in her laboratory notebook. Olyaei is a pre-medical student in her second year of research, working in tandem with Raman in the Schilke laboratory.

You walk into a full classroom of strangers bending over microscopes and looking at graphs, but everyone is different from you. Heads turn as you enter. You may feel alone in this room.

Many women who study science, technology, engineering and math may feel this way because they are outnumbered by men, according to a quote by Xueli Wang from “Frontiers in Psychology,” which was also published in “Frontiers Communications,” an online science journal.

“STEM programs at postsecondary institutions of all levels produce a significantly higher number of male graduates than females,” Wang said.

According to students like Max Simon, a BioHealth major, the lack of female engineers is noticeable.

“I don’t know a single female engineer, now that I think about it,” Simon said. “Engineering is a very male idea, I think, in society.”

The director of women and minorities in engineering, Ellen Momsen, said that for most of the country, the gender difference in the field of engineering is very similar to the ratio at OSU. Meaning that those numbers are reflective of most universities across the U.S.

“Well, I don’t think it’s good; I think we are about the national average, actually. I think as we offer more and more majors that appeal to women those numbers will go up; if we add a biomedical engineering major which we don’t have, that might help,” Momsen said.

There are a few other ways the college can seek to make their numbers more even, Momsen said, such as informing students about their options in high school.

“Biological sciences are attracting women, the areas that aren’t are the physical sciences and engineering and I think, so much, is when high school girls are looking for careers, they don’t see the career they want in engineering,” Momsen said. “Engineering is one of the areas where most people aren’t sure what an engineer does.”

Momsen also suggested that the engineering department needs to do a better job of educating people about the jobs that engineers really do. The technical application of engineers’ jobs might, as she suggested, draw more people to the major.

“How can we do a better job of letting people know that it’s not only in the biological sciences that you make a difference?” Momsen said.

Furthermore, according to Momsen, not every STEM major has more men than women.“The genders are not equally distributed across the College of Science. Some majors have 50 percent women and others are very different. Bringing this issue up is still really critical because we need a diversity of thought from people of all different backgrounds,” Momsen said.

Not only are these fields historically male-dominated, they continue to be. According to Zoe Hershenson, a geology student, she is very frustrated by the difference in the STEM fields.

“I honestly don’t try to think about it. I’ve got quite a few girls in my classes, it’s just so depressing—why do you want to think about things like that women often get paid less?” Hershenson said.

According to Simon, the lack of women in science majors is a big disappointment to him because he enjoys the sciences.

“The fact that women are in less than half of the field is kind of upsetting, honestly, because the way it should be is that people should be taught science. Then they become interested in science, because science is cool,” Simon said.

However, not every major at OSU is dominated by men. The College of Forestry has a fairly equal distribution of men and women. In the college of Public Health and Human Sciences, however, women outweigh men quite a bit. According to OSU’s enrollment and demographics website, the enrollment for the 2016-17 academic year has 2,069 women in PHHS and just 689 men.

Students said they thought part of the reason for the disparity was the common stereotype of women as caretakers.

“I feel there is a stereotype for women to be caretakers of people’s lives and maybe it’s because of that stereotype that it influenced their field they are interested in, like (Public Health),” Simon said.

According Hershenson, this is because stereotypically feminine roles are to be more subservient and only certain STEM fields are considered more for women.

“I think you usually think of a woman instead of men as someone who takes care of others. When we think of women, in the public, TV, movies, it’s always men are the ‘hard sciences’—women are the quote ‘easy sciences,’” Hershenson said.

Based on the data from the college of PHHS it’s clear that every field is different as far as the number of gender identities present and those ratios change in every field. For example, the College of Forestry is relatively small, with 530 men and 346 women. According to Rong Fang, a Ph.D. student and teaching assistant in forestry, she is welcomed in her chosen field.

“In America I definitely feel supported, yeah, people support women. Maybe not in instrustry as much but I don’t feel that way in school. If people say no to me I don’t think it’s because of my gender. I think recently in contemporary culture (gender) is not a determining factor in people’s preferences and their levels of inclusiveness, it doesn’t matter,” Fang said.

However, even with the inclusiveness of the program, according to Fang she is still outnumbered in her field.

“I think within forestry we definitely have more guys, for the forest engineering part. I don’t feel equal in my department. I don’t actually feel equal, but the gender issue doesn’t bother me,” Fang said.

This inequality is a problem that the college of engineering is trying to change. Their long-term goal is to have an engineering department that has just as many different kinds of people as exist in Oregon, Momsen said.