The Daily Barometer • May 30, 2017 • https://dailybaro.orangemedianetwork.com/8335/daily-barometer-news/corvallis-stabbing-puts-five-victims-in-hospital/ 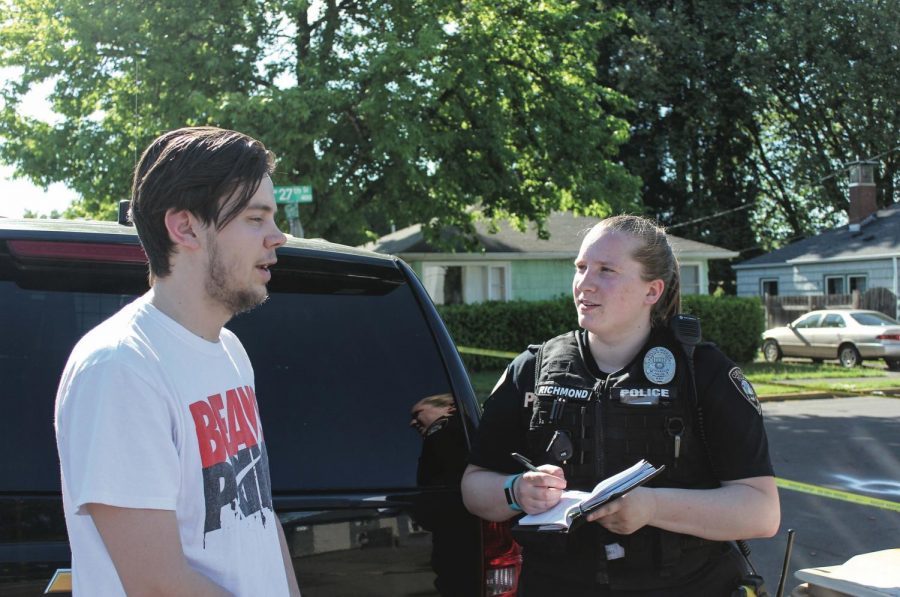 Nolan Butuso, one of the stabbing victims, recounts his experience with the incident to Corvallis Police Officer Lyssa Richmond the evening after the stabbing. The home in which the incident occurred has been released to the victims, but due to smoke damage and large amounts of blood, the residence is unlivable.

Officers from the Corvallis Police Department responded to a reported stabbing at roughly 5:54 a.m. on the 400 block of 27th Street this past Monday, May 22. During the incident, five individuals were injured and transported to Good Samaritan Hospital for injury treatment. Of the five injured, one victim, Jesus Valencia, was life flighted to Legacy Emanuel Medical Center in Portland.

“I don’t know whether or not he was cut in the eye, but the way he described it to me, he took a really hard elbow in the eye and it caused it to swell up immensely,” Butuso said. “We haven’t gotten any more information on this, but we’re worried that he might lose the eye.”

All five victims, Butuso, Valencia, Evan Burns, Dan Rinkevich and Cat Lisman, have been released from the hospital and are now in recovery from the incident. The victims’ home has also been released to them, but according to Butuso, the amount of smoke damage and blood within the residence makes it unlivable.

Annie Todd, a neighbor of the victims, recounted her experience of the incident in a Facebook post on Tuesday, May 23. According to Todd, she and her boyfriend, Matthew Goodlett, woke to an explosion that came from next door. The couple ran outside looking for the cause of the explosion as Todd immediately called 9-1-1. Goodlett used a fire extinguisher to put out the fire as Todd ran inside the neighbors’ residence through an already-open door. Upon entering,Todd locked eyes with the attacker as he was stabbing Jesus. She proceeded to scream at the attacker to stop.

“I think that initially I was really shocked because I ran in to wake people up because of a fire,” Todd said. “My hands were shaking.”

When the attacker’s attention seemed to switch focus to her, Todd promptly retreated back to her home, remaining on the phone with the 9-1-1 operator. Looking out her window, Todd witnessed a man flee from the scene down 27th Street. She then proceeded back to the neighbors’ residence to aid the injured victims.

“I informed the operator that the fire truck had arrived and they began handing out gauze like candy,” Todd said in the Facebook post. “I remember having to ask for more and more.”

Although the incident happened near Oregon State University, a formal announcement was not sent out to OSU students. According to Steve Clark, the OSU vice president of university relations and marketing, the suspect was apprehended immediately after leaving the house in which the incident occurred, by a law enforcement officer that was in the neighborhood at the time.

“(The university) felt that there was not an ongoing threat to the Oregon State community to prompt a timely warning,” Clark said. “At the time, because the suspect was in custody, the next attention was to help in any way possible to ensure the safety of the individuals that were injured and ascertain whether any of those individuals were students to assist the police and the injured individuals to communicate with their parents if possible and it was just a very dynamic situation.”

According to Clark, the university did not have much information in regards to the incident and because it was a criminal matter, followed the lead of CPD.

“When matters such as these occur, we’re very mindful and our primary goal is to first and foremost provide a safe campus for our students, faculty, staff and guests,” Clark said.

The evening of the incident, Samantha Marie Traeger, the sister of Butuso, set up a GoFundMe account to help raise funds to pay for the victims’ medical expenses. As of Monday, May 29 at noon, the account had raised $10,127.

To help with raising funds, The Dam, a local bar, set up an event from 10 p.m. to 1 a.m. on Saturday, May 27. The Dam encouraged a $5 donation at the door and 10 percent of all proceeds from the night went directly

“The owner, Ben Metzger he really is trying to build a tight community. He just wants to be able to help the community the best he can and the second that he heard that (the incident) happened, he wanted to be able to help in some way,” Awni Atlas, a bartender and event coordinator at The Dam, said. “There’s not a lot of money that he, himself, can donate, but through doing a fundraiser, we can produce that.”

Beyond funding the victims of the incident, resources are also available to any individuals who feel affected by the incident.

“I would say for anyone who is concerned for not only themselves, but friends or faculty members of the OSU community, to be aware of the services provided by Counseling and Psychological Services CAPS, to take advantage of those, to utilize those and not delay and to remember that while this is a very unfortunate tragic incident, to remain aware of your circumstances, but also to understand that we do not believe that there is reason to fear that such an incident will occur again,” Clark said.

The suspect, after fleeing from the residence on foot, was found in front of the Chintimini Senior Center where he was detained by CPD. The suspect was later identified as 22-year-old Benjamin Leland Bucknell. According to Clark, Bucknell is a former OSU student and attended the university during the spring 2014, winter/spring 2015 and fall 2016 terms as a pre-forestry student.

Bucknell was called before Circuit Court Judge Locke A. Williams for an arraignment on Tuesday, May 23 at 1:30 p.m. Bucknell’s original bail amount was set for $525,000. At the arraignment, the state asked for a total bail amount of $3 million, but Williams increased the original bail to $1.1 million, and set a new court date for June 6 at 8:30 a.m.