The Daily Barometer • May 8, 2017 • https://dailybaro.orangemedianetwork.com/8344/daily-barometer-news/darkside-cinema-provides-alternative-film-destination-in-corvallis/ 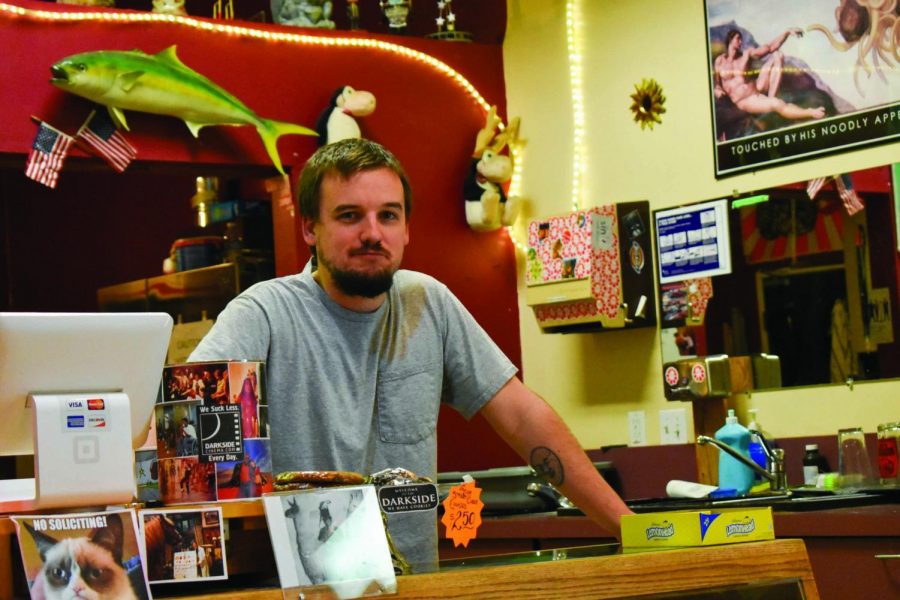 Joey Bauer works at the Darkside Cinema, which took second in the best of movie theater category.

You walk into a doorway on 4th Street in Corvallis and up a set of stairs. As you round the corner, you are greeted with antique movie posters, theater memorabilia and a hallway filled with velvet paintings, all of which lead you to the ticket counter of the Darkside Cinema.

The Darkside Cinema has been providing Corvallis with independent films, documentaries and art for over a decade.

Joey Bauer has been working to manage and run the establishment for nearly its entire life.

The owner, Paul Turner, has been in the business for about two decades now.

The story of the Darkside’s beginning came from “a night of drunken debauchery,” according to Turner. “That, and the were no real art cinemas in Corvallis. I’d been doing first-run movies for a long time and I needed to do an art house cinema or get out of the business.”

According to Bauer, the Darkside and its predecessor contribute something unique to Corvallis.

Darkside also takes special care to foster Corvallis’ film festival scene, as well as provide screenings for film classes at the university, according to Bauer.

“We do film festivals for OSU,” Bauer said. “We’ve done the Queer Film Festival for three years, the International Film Festival for seven or eight years. There’s been different professors that bring in their programs here, there was a video arts fest and some other things like that.”

Darkside’s service and interaction with the community is not only about providing movies and popcorn, either, according to Bauer.

“It’s the people, it’s the support that we have,” Bauer said. “There’s people that come here every day of the week, there’s people who come here every other week, but they’re all familiar faces.We take our time with those that come into our establishment. Being here for 10 years, I know a lot of them by name now, and we have conversations outside of what we do here.”

Frequent patrons of Darkside, like Corvallis local Jennifer Bouton, enjoy the experience of the Darkside.

“I’m historically a regular, going back to the Avalon days,” Bouton said. “I absolutely appreciate that there are foreign movies and movies about controversial subjects. I appreciate the multicultural aspect that the films bring to the community. The town would not be the same without the Darkside.”

Turner also has some big ideas for the future of the Darkside.

“I want to build a drive-in,” Turner said in an email. “I’m actually serious. The Motor Vu in Dallas, Ore. just closed and I think the valley needs a drive-in theater. The land is too expensive and building in this town again frightens me, but if I had unlimited funding, I’d build a drive-in with cars at the back and a whole park in front for bicycles and pedestrians.”