The Daily Barometer • May 7, 2017 • https://dailybaro.orangemedianetwork.com/8362/daily-barometer-sports/beavers-lose-on-senior-day-but-still-clinch-series-over-utah/ 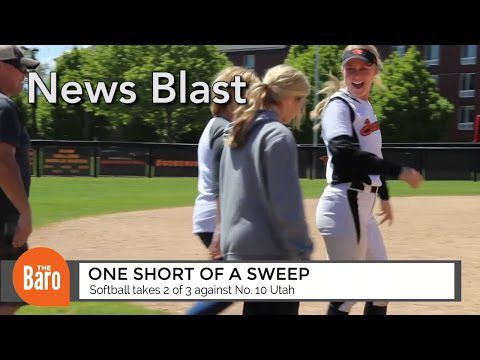 The Oregon State softball team clinched the series win over 10th ranked Utah this weekend. Despite dropping their home finale 6-0, the Beavers secured the series victory with wins on Friday and Saturday to win their second Pac-12 series against a top-10 opponent.

The Beavers recognized their seniors Sunday afternoon in their home finale. Head coach Laura Berg reflected on her senior players.

“They’re amazing,” Berg said. “I’ve had the privilege of having Natalie (Hampton) for five years. She redshirted and Sammi (Noland) and Taylor (Cotton) transferred in here, they have been a blessing. All three have been great leaders for the younger kids and they work hard. They want it so badly.”

Redshirt senior infielder Sammi Noland transferred from Nebraska to Oregon State and started in five different positions during her three years as a Beaver.

“I’m so lucky that Coach Berg gave me the opportunity,” Noland said. “It can be kind of hard to transfer in and find a spot. It’s been the best thing that’s ever happened to me and I wouldn’t change it for the world.”

“They’re great,” Hampton said. “We all bring something different to the team. It’s been incredible to play with them. They’re great people and it’s nice to be surrounded by good people.”

Despite the fanfare after the game. Berg was disappointed in the way her team played Sunday afternoon.

“Anytime you can come away with a series win against any team in the Pac-12 it’s good,” Berg said. “It’s not the fact that we lost (today), it’s the fact of how we lost. Lack of energy, lack of competing. That’s the issue that I have.”

Noland plans to take care of business against the Bears following the series win against Utah.

“It’s a huge win for us,” Noland said. “It’s going to help us out a ton. Today sucks obviously, but we got the series win and that’s even more important. We have to come out good against Cal.”

With one series remaining, the Beavers will continue their post-season run this week against the California Bears, and Berg is embracing the challenge.

“‘Pressure is a privilege’ as Billie Jean King would say,” Berg said. “If you’re in athletics and you don’t like pressure, you need to pick something else.”

Hampton is used to the stress that comes with making a tournament run, having being part of a 2016 team that made the postseason.

“There’s always pressure,” Hampton said. “It’s a game and I think sometimes we lose sight of that. We like the pressure, that’s why we play the game. We have to keep working hard and keep moving forward.”

Senior pitcher Taylor Cotton is focused on defeating Cal and moving on to the postseason.

“I’m super excited to see where we go,” Cotton said. “We’re definitely going to go to postseason. I’m ready to win these last three games against Cal and move on to regionals.”

Oregon State will finish their regular season in a three game series against California this Thursday. First pitch is set for 2 p.m.