The Daily Barometer • May 1, 2017 • https://dailybaro.orangemedianetwork.com/8388/daily-barometer-sports/osu-baseball-balances-surplus-of-quality-outfielders/ 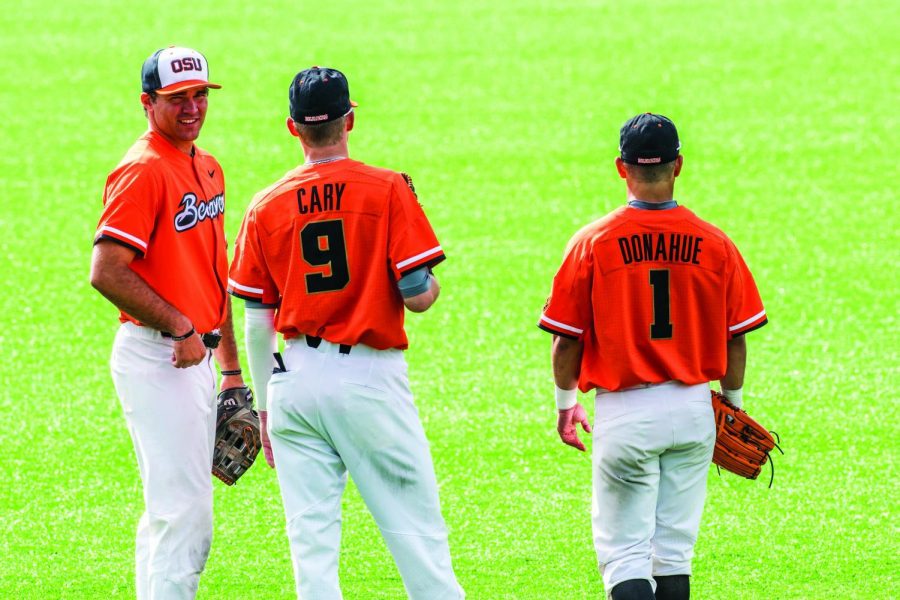 Beaver’s head coach Pat Casey has plenty of depth at the outfield position, but he has an interesting tactic with how he picks his starters.

“I get a dart board, I put all their numbers on there, and I throw darts and the first three guys that get to, I pick them,” Casey said.

Casey has to juggle a deep outfielding corps, and sometimes picking the right combination is difficult. This can sometimes mean sitting a player who could easily be an everyday starter. For players, learning to accept the role designated to them in the starting lineup can be tough.

“I go with the matchups,” Casey said. “I look at a guy and go, I think this is a better matchup for him or we want to be a little better defensively in the outfield so we’re gonna go with this matchup.”

Steven Kwan, Elliott Cary, Christian Donahue and Jack Anderson are all guys who are capable of starting every day. With Trevor Larnach being an option to play right field as well, Casey has multiple pieces that fit the same puzzle.

Larnach has played right field, first base and designated hitter for OSU all in recent weeks. According to him, it doesn’t matter where he plays or who starts in the outfield, the team will be successful.

“There’s no weaknesses on our team,” Larnach said. “You can bring anyone in, and they’re going to do just as good of a job, if not better.”

With all the high caliber talent, it could be tough for players to accept not being in the lineup every day.

“That sometimes gets to people,” Donahue said. “The ultimate goal for us is first of all win the Pac-12 title, and then go for the world series. In doing that, we have to put aside our personal goals, and trying to start.”

The mentality is similar throughout everyone sharing playing time. For Kwan, this may mean giving up an out to advance the runner.

“I think with Nick being probably the best leadoff hitter in the nation, my job really is to just bunt him over or get him over any way I can,” Kwan said. “Since he usually gets on at the start of the game every time, my bunting usually gets him over, so it helps the lineup go real good.”

Kwan’s bunting became much more important when Casey moved him the the two-spot in the lineup, looking for consistency. Kwan has started the last two series batting second, and has been playing well.

In addition to Kwan, Jack Anderson has been producing extremely well at the plate, posting a .311 batting average, third highest on the team.

“That’s just a unique thing about our team,” Donahue said. “You just see the depth that we have. We’re rotating guys around, and when they get their chance, they’re making the most of it. There’s a bunch of different guys who some days they’re in the lineup, some days they’re not, and it’s just cool to see that everyone’s getting their chances.”

Donahue has been rotating into the lineup as well, but getting used to not playing consistently was tough for him. However, as players have begun to embrace their unique situation, it has become easier to manage.

“You try not to let it affect you and go out there and prepare the same as if you were going to start that day, so if you are in the lineup, your mind is focused, and you’re ready to play,” Donahue said.

Larnach is a player who plays multiple positions, and explains what changes day-to-day.

“It’s just different on the defensive side,” Larnach said. “You just gotta think differently on where you need to go, and what needs to happen and what can happen. That’s about it.”

Standing at 6’4”, Larnach doesn’t look like your typical outfielder, but has gotten some starts in right field.

“I think he’s a lot better outfielder than people think because he’s a big guy,” Casey said. “He looks like he doesn’t run very well but he actually gets to balls fairly well. For him, I think he wants to be in the lineup, and doesn’t care where it is.”

That has been the motto for the outfielding corps this season: getting in the lineup, no matter what position.

Balancing defensive positions, the starting lineup and mentality when not playing can be difficult, but OSU’s outfielders make it look natural. In fact, the entire team has gotten much closer amidst a historic season.

“We got a good squad with a team that feels good about each other and trusts each other, and we believe in each other,” Larnach said. “You could put whoever in there, and they’re giving it their all, and they’re gonna do good.”

After missing the NCAA tournament last season, a different fire was lit under the returning players.

“There was a different sense of motivation, a different fire that was lit under everyone,” Donahue explained. “People accepting their roles, and accepting that they don’t have to do too much out there, can just go out there and do what they’re called upon.”

The maturity and selflessness displayed by the team is a strong candidate for why they are the top baseball club in the nation.