The Daily Barometer • May 17, 2017 • https://dailybaro.orangemedianetwork.com/8394/daily-barometer-news/arrangement-of-dam-jam-headliners-changed/ 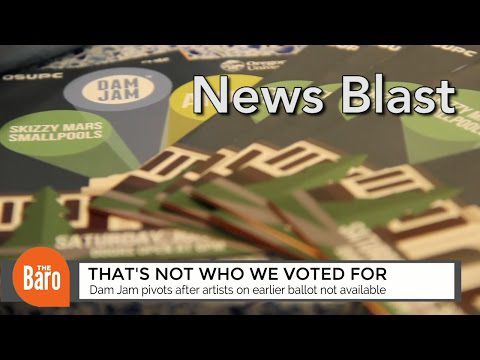 One of the most well-known and thoroughly-planned out events of the year, Dam Jam, has been announced, with the twist for this year being more bands and new headliners.

Students voted from a list of five major artists in winter term to show coordinators who they wanted to perform at the June 3 concert. Last week, coordinators announced that there will be one headliner and three other bands, none of those bands being any of the major headliners that were on the list of choices students voted on.

“The headliners make me not want to attend Dam Jam because I have no idea who any of the artists are,” first-year human development and family sciences and education student Camryn Kimberly said. “The fact that the headliners are not any from the poll, I feel as if my opinion is no longer valued. I was really excited for Dam Jam because I had a say in who got to perform.”

Stock and Simmons’ main goal is to give the student body an amazing performance and a fun-filled event as the year comes to a close. They take lots of time picking the right genre and making sure that the overall Dam Jam event is in the right set of what the students are looking for.

According to Stock, their biggest goal was to get a more “up-and-coming band,” so that in future years students at OSU will be able to tell people that they saw that artist before they were big. Somebody that wasn’t just a “throwback middle school artist,” which has been the recent Dam Jam trend.

The top-five artists that were on the original ballot for students included: Mac Miller, Jon Bellion, Jeremi, Cashmere Cat and Charlie XCX. There were around 3,600 responses from students and once Simmons and Stock determined which artist was the obvious choice, the issue of cancellations arose.

“Each one of those artists had setbacks which allowed us to not choose them, unfortunately,” Simmons said. “For example one of the artists, Jon Bellion, had a tour date the day before and the day after and he wanted a lot more money; we offered and he still did not accept.”

Once every single artist had some sort of related issue come up, Stock and Simmons came up with the idea to change the format of Dam Jam.

Stock notes how important it is in picking the artists to do the research and find out what their image is in pop culture today. Also, it is important to make sure they are a positive influence and that they want their name associated with the university.

The event coordinator team threw around 100 more names that would be a good fit and the artist Amine emerged.

“His name came up because of his big hit “Caroline,” we had this tingly sense he was going to get big. He’s from Portland, so he is not so far away,” Simmons said. “And he has a pretty large following with people of the OSU community.”

The event will feature Amine and three other bands including Skizzy Mars, Smallpools and a DJ as the introduction.

Although this year is different, Simmons and Stock feel very excited about the event and what they are planning.

Dam Jam is June 3 at 6 p.m. in the Memorial Union Quad. Tickets are on sale now.