The Daily Barometer • May 17, 2017 • https://dailybaro.orangemedianetwork.com/8405/daily-barometer-sports/mikayla-pivec-takes-advantage-of-college-experience/ 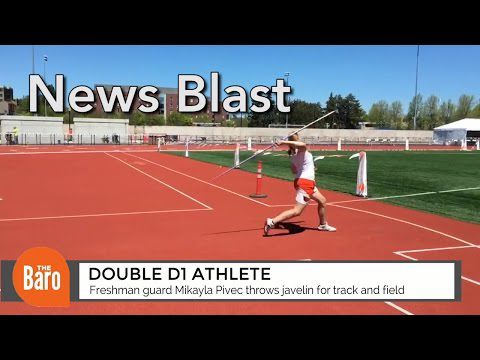 Division One Athlete in two sports.

An athlete can control the tempo of a game and crowd with the character they exude, the passions they have developed and the effort they have worked their whole lives to build. But this athlete can do it all, on a court and a track.

Freshman Mikayla Pivec has proven herself on the basketball court as a starter on the women’s basketball team that won a Pac-12 title and made a Sweet 16 appearance;  now she continues to build her name in track and field.

Mikayla threw 134 feet 4 inches at her first meet, then beat her personal record of 142-4 the following weekend at the Oregon Twilight Meet in Eugene. She followed up the next weekend at the Pac-12 meet where she threw 138 feet 5 inches.

“I actually didn’t know she threw javelin,” said Janessa Thropay, a fellow freshman on the women’s basketball team. “But now that I do, I can honestly say I wasn’t surprised.”

Just a week and a half after basketball season was over, Mikayla talked to the head track coach in hopes they were looking for more bodies. Mikayla had a week of spring break to visit home, her parents and her high school senior sister. There she was able to discuss track with her sister, who was a workout partner and live-in best friend.

“I did track in high school and in the back in my mind I was thinking, if it worked out, I would love to throw javelin again. I did distance running in high school, but I am retiring the shoes,” Mikayla said. “My sister was running track at home and that sparked my interest. I started working out for three weeks prior to my first meet.”

Mikayla’s family has always supported her decisions and pushed her to become the athlete that she is today. Her father, Mike Pivec, went to all her sporting events and drove her to all her practices.

“Whenever it would get tough, my dad would always tell me to keep pushing through.  He would always be my rebounder and my workout partner at home,” Mikayla said.

Mikayla played a sport every season in middle school and in high school, and there were times she was playing multiple clubs and travel sports at a time. Eventually she had to start eliminating sports and narrow it down to what she wanted to pursue in college.

“She followed basketball which is her favorite thing to do, and everything else kept her in shape and gave her an opportunity to spend time with her sister and friends,” Mike said. “Basketball is something that she hopes to play beyond college.”

There are a lot things it takes to become an athlete and overcoming obstacles is one of them, Mikayla said. Fortunately, she has not had to deal with many injuries that have set her back for a long period of time, however, mental obstacles can be just as demanding as physical ones.

“In high school, we won one state title my junior year, but my sophomore and senior season we lost in the state championship. My junior year it was a really exciting experience so we worked all summer and the whole year and our only focus was to help the team repeat, but sometimes it doesn’t work out, but you just have to use it as fuel for the future,” Mikayla said.

Mikayla reports to a military conditioning class at 6:15 a.m. and then continues on to attend class, go to practice and go to Dixon for some extra work afterwards.

“Her work ethic is insane,” Thropay said. “She does not only do so many things that the average person would have an anxiety attack, but she does all of those things well and to the best of her ability. She doesn’t know how to give less than 100 percent. She also doesn’t know failure, because if she fails, she’ll do that same thing over and over until she is successful.”

When it came down to choosing a college, she was looking at OSU, Stanford and University of Washington—her father’s alma mater.

“Every day that I drive 15 miles past University of Washington and still have 250 miles to go visit her, I think about, should I have convinced her to go closer?” Mike said. “But she chose Oregon State because she really believed in the coaching staff and the direction of the program”

Mikayla is so much more than just a hard worker and skilled athlete. There are a lot of great students in the Pac-12, and a lot of skilled athletes, and she is working hard at maximizing what separates her from them.

“Mikayla’s personality is one of the sweetest, most genuine and pure personalities out there,” Thropay said. “She has done great balancing both so far and I’m sure she will be consistent in that, just like she is in everything else.”

Her father continues to be inspired by the talented athletes that surround her and her future success to come—even if it is taking place at Oregon State rather than Washington.

“I am proud of the person she is becoming,” Mike said. “I know that she is going to work hard and try to be as good as an athlete and teammate as she can be, but the steps she is taking in other areas like her academics and throwing javelin are allowing her to take advantage of the full college experience.”