The Daily Barometer • May 1, 2017 • https://dailybaro.orangemedianetwork.com/8418/daily-barometer-news/osu-spring-drag-show-provides-form-of-self-expression-creates-community-for-lgbtq-individuals/ 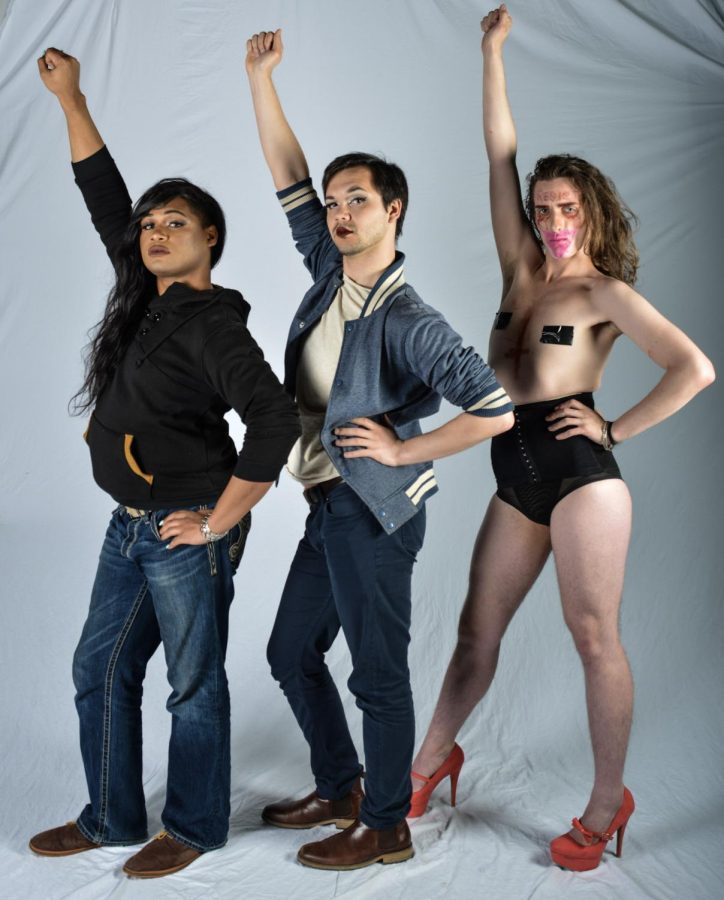 Expression is open to interpretation and can be different for everyone. In the LGBTQ+ community, drag is one of many facets of expression that some individuals use. With this past week being Pride Week, Oregon State University hosted the annual Spring Drag Show at the LaSells Stewart Center on Saturday, April 29.

“Drag plays many parts in queer and transgender communities,” Cindy Konrad, assistant director of the Pride Center at OSU, said. “It is a way for people to play with and poke fun at gender roles and to experiment with different aspects of their own gender in fun and supportive environments. Drag brings LGBTQ+ communities together and creates much needed social space.”

Lucielle S. Balls, Miss Dharma Prada MacPherson and Carmen Sutra, otherwise known as The Queens of the Valley, all use drag as not only a form of expression, but also as a way to make their voices heard and create a community for LGBTQ+ individuals and their allies.

Luke Kawasaki, also known as local drag celebrity Lucielle S. Balls, has been doing drag for around ten years. He started in middle school dressing up for Halloween, with a look consisting of a Shake-N-Go wig and water balloons filled with chocolate pudding stuffed into his bra, according to Kawasaki.

“When I was younger and exploring drag for the first time, I was doing it because I felt this inborn need for self expression,” Kawasaki said.

For Dharma Mirza, or in drag, Miss Dharma Prada MacPherson, drag has always been a part of her life, according to Miss Dharma.

“I think I’ve been doing drag my entire life because to me, drag is like something that we all do,” Miss Dharma said. “I think drag is all about gender performativity and we all perform gender in a way I think. So for me, I think I’ve always been doing it.”

According to Lex Porter, also known in drag as Carmen Sutra, drag has played a role in their life since 2010, after graduating from high school.

“I kind of played with messing up genders a bit more when I started accepting more of my feminine features that I couldn’t really change and started to kind of play those up a little more,” Porter said.

Drag is not only used as a form of expression, but as a platform for communicating topics and issues that individuals feel strongly about, according to Miss Dharma.

“Drag gives us this opportunity to do what we want with the platform,” Miss Dharma said. “I can use drag to discuss militant Islam like I have at bars and it helps me address things like self-harm like I did when I became the Queen of the Beaver.”

“Queen” and “King” of the Beaver were titles awarded to the winner of the OSU drag show in the past. However, the titles have recently changed to Beaver Royalty court in order to move away from gender binary titles like King and Queen.

Miss Dharma won the title of Queen of the Beaver in 2015. In the same year, she performed a ballet piece about self-harm after someone in the LGBTQ+ community committed suicide.

“It was one of the most powerful and defining moments of my life, because I was able to come out on stage and show people that one, that trans women had a space as dancers, but also that self-harm is something that we all go through and something that we need to be out in the open about because trans folk are literally dying all the time,” Miss Dharma said.

Drag can also be used as a form of counseling and a healing process for many individuals, according to Miss Dharma.

“It also helps me address things like self-image issues and different things. So it really is like this survival process through therapy because drag is the most healing thing you’ve ever done,” Miss Dharma said.

Drag can also be used as a form of resistance against stereotypes and norms, specifically gender norms that exist in society today, according to Kawasaki.

According to Konrad, one of the most powerful effects of drag she has seen is the way it creates a loving and supportive environment for individuals’ gender performances.

“The shows on (the) OSU campus are especially loving and supportive places for people to try out drag for the first time,” Kondrad said. “Drag can be fun, sexy or silly, but it also serves as a platform for people to share social justice messages that range from shattering gender stereotypes to drawing attention to specific issues in the community.”

OSU’s Spring Drag Show gave performers the opportunity to express their different forms and depictions of gender. This year’s drag show theme was “Existence is Resistance.”

“(The show) is basically talking about inclusivity and diversity and being your own person and loving that person and supporting the people that love themselves as they are,” Porter said.

The drag show hosted 15 performances listed in the event’s program, along with one improvised on-the-spot performance. Tickets to the event sold out at the door.

One performer at the drag show was King Julian G. String, who performed Lady Gaga’s “Bad Kids” while dressed in a Slytherin robe from “Harry Potter”.

According to Julian, a cultural shift in what is traditionally defined as good and bad has recently taken place. The queer community has not only been discriminated against and viewed as bad, but has been illegal for most of America’s history, Julian said.

“I really wanted to like redefine the difference between what we define as good and bad,” Julian said. “Younger generation rebels, people going against the norm have been defined as bad. We’re seeing a shift in that and so I wanted to kind of redefine that.”

Drag gives some individuals in the LGBTQ+ community the opportunity to speak out and have their voices heard, according to Julian.

“It’s important that we continue this tradition, because we do have the opportunity to do this safely, aside from tripping from our own heels on stage,” Julian said. “We have this opportunity to stand up in front of 1,200 people and say, ‘It’s okay, we feel empowered to do this. This is not bad, this is good.’ For those people who don’t have the courage to get up there and perform with us, we can sort of speak for them and give them that validation.”

Drag can be used to connect all individuals in the LGBTQ+ community, but it is important to recognize that every individual is different, according to Porter.

“We take into consideration that everybody is unique and no experience is the same as another one. Even if it’s really, really, really close, there’s still other factors that can cancel it out and most people I talk to in drag shows recognize that,” Porter said. “I think it’s such a beautiful thing because I’ve met a lot of awesome individuals.”

According to Kawasaki, while drag performance is an important way to create and spread the LGBTQ+ community, it also helps individuals that perform drag express their true selves.

“In confidence, there is something about putting on, or what I like to say, there’s something about painting yourself onto your skin, that allows you to be who you want to be, but for some reason are holding back,” Kawasaki said.

The confidence Kawasaki has gained from doing drag has carried over into the rest of his life. This confidence has also taught him the importance of loving yourself as you are, Kawasaki added.

According to Miss Dharma, she has experienced the effects drag can have on the LGBTQ+ community. She has received numerous messages, especially from queer and trans youth, telling her that she has made an impact in their life just by being herself, Miss Dharma added.

“I’m so happy to hear that I am inspiring folks and I hear it all the time, too, but it doesn’t really sink in until you believe it yourself and I really do think that I am changing people’s lives,” Miss Dharma said.