The Daily Barometer • May 2, 2017 • https://dailybaro.orangemedianetwork.com/8438/daily-barometer-news/womens-rugby-builds-family-amidst-the-violence-of-the-game/

Women’s Rugby builds family amidst the violence of the game 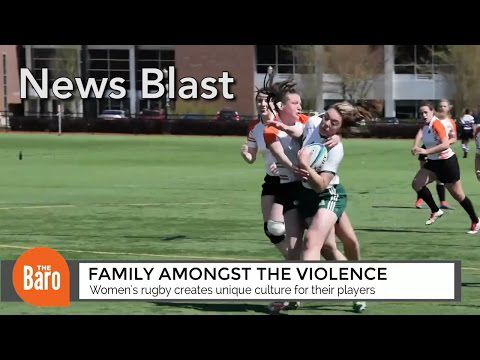 When the uniforms are on, the laces are tied and the game faces are in action, the women on Oregon State University’s rugby team may look tough and play hard against their opponents, but to each other, they are family. The structure the team has developed and the love that they share for the sport contribute to the successes they have built together.

Sophomore in electrical engineering Constance Parker tried out for the team her freshman year upon a recommendation from her brother. She played basketball in high school and was looking for a game that would challenge her physically.

“I was always told I was too physical in basketball, which is why I typically fouled out of games and I guess I needed a sport where I couldn’t get in trouble for being too aggressive,” Parker said. “After tackling a person, I knew instantly I loved the sport.”

Junior in civil engineering Addie Miller is in her second year of playing on the team. She explained her experience getting onto the team her sophomore year and the dynamics of the team.

“I missed the team dynamic that I had doing sports in high school, but freshman year I was too scared to join a club team. I wanted to try a new sport, and I knew that rugby was a wild, aggressive game that I wanted to try,” Miller said. “My sophomore year I went out to the practices and boy, was it different than anything I have played, but worth it all. This is my second year, and I love it.”

However, there is much more to rugby than simply being tough. The team has developed a big-little system, much like the framework of a sorority, where they are matched by similar majors and interests and are there for each other to support and acknowledge the other’s successes.

“Our team is like a big family,” Parker said. “We try to be as welcoming and as inclusive as possible. We do a lot of team bonding, going to dinner before and after games. We are supportive of each other and are always excited when one of our players does something awesome in a game.”

The team develops nicknames for each other within the first couple weeks of joining the club.  Typically, they refer to personal interests or the little’s relation to her big.

Alexandra Fautanu, a mechanical engineering junior, got her name because she was an aggressive wrestler in high school, so they named her after a comedy movie.

“They named me after Nacho Libre and my little, Chancho, like the sidekick in the movie,” Fautanu said.

According to Parker, it is a rite of passage for the players, and it makes new members feel like a part of the rugby family.

“The funny thing is that we use these names so much that players from other teams think they are our actual names,” Parker said.

According to Miller, or ‘Hammy’ as her team refers to her, the team is strong thanks in part to the various personalities involved.

“We are all so different, but that is what makes us so close. The extra push and challenge from our teammates is what is going to give us all the confidence and skill to perform well on the field,” Miller said.

The season runs from the beginning of fall term to the first weeks in spring term. During the season, they practice three to five times a week and have games and tournaments on the weekends, where they travel as far north as Canada and as far south as San Francisco. The spring and fall terms are set aside for tournaments that can potentially qualify the team for nationals.

“Rugby is a sport built on respect, built around it—for the game, for the players—no matter who you are, how you look, what you enjoy, rugby will be there to back you up,” Miller said. “Our team is built of girls who associate with this idea, allowing for a close-knit community.”