The Daily Barometer • May 17, 2017 • https://dailybaro.orangemedianetwork.com/8445/daily-barometer-sports/osu-baseball-stays-hot-against-portland/ 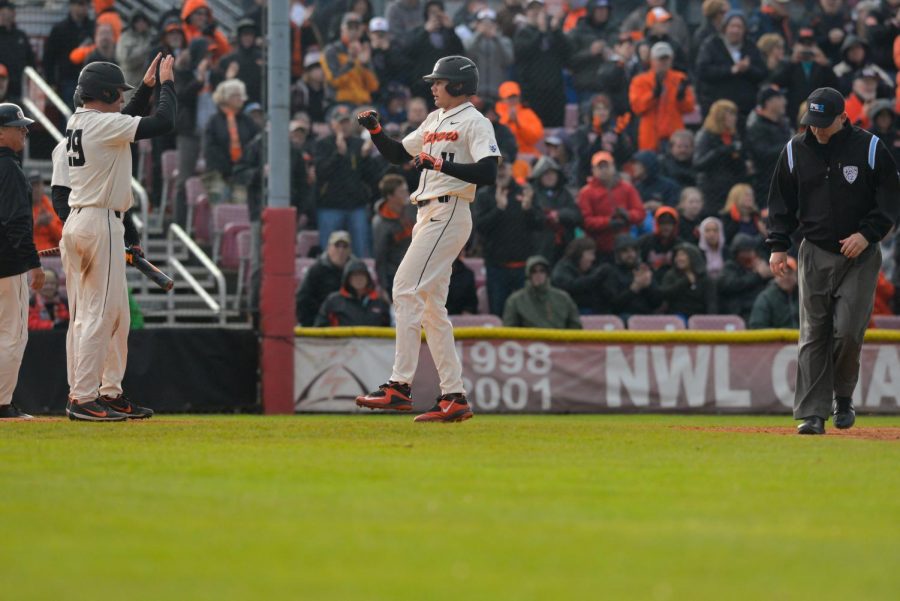 Cadyn Grenier played well for the Beavers, launching a fifth-inning solo home run, his team-high sixth of the season. Grenier finished 2-for-4 offensively, with a run scored and an RBI.

“Sticking with an approach that works, a routine that works, and just trying to find myself, and what kind of offensive player I am,” Grenier said of what has been working offensively for him. “It’s all coming together right now, and it feel really nice.”

Grenier took a 1-2 curveball over the “Great healthcare, no curveballs” sign in left center to put Oregon State up 3-1, the beginning of a four-run fifth inning.

“That’s ironic,” Grenier said with a laugh. “Yeah, it was. It was a hanging slider. I didn’t notice that. That’s funny though.”

Trevor Larnach also stepped up big for OSU, taking a high fastball to left center field as well, a two-run shot. Larnach finished 2-for-3 on the afternoon, with a pair of RBIs and a run scored.

“I’ve had a couple balls hit like that this season, and they didn’t go out,” Larnach said. “I was just running the bases like it was a double, because that’s usually what it is, but I was fortunate for it to go out.”

Steven Kwan was again the “spark plug” for the Beavers, igniting their offense early by providing a double and a triple to round off a 2-for-4 afternoon, while also scoring a pair of runs.

“Kwany carried us tonight,” Head coach Pat Casey said. “He was the guy that really got it going.”

Starting pitcher Jordan Britton (1-0) threw the ball well in his second start of the season. Britton didn’t surrender any earned runs but was pulled in the fifth inning for Grant Gambrell, who was replaced by Jake Mulholland one batter later.

“We were able to do it without throwing Eisert, which was good, or Engelbrekt, which we were hoping we could do. I thought Sammy (Tweedt) was good. He needs to continue to do that because I think he can help us out down the stretch.

”While the Beavers were able to conserve their bullpen, Mulholland (6-1) went 2 2/3 innings, notching his sixth win of the year in the effort.

Tweedt, a Salem native, finished off the last 1 1/3 innings of the game for the Beavers. Tweedt was able to hold the Pilots scoreless while striking out a pair of batter.

Looking Ahead: Oregon State hosts Washington State for a three-game series to wrap up conference play this weekend at Goss Stadium. Series will open Friday night, with first pitch at 7:05 p.m.