The Daily Barometer • May 30, 2017 • https://dailybaro.orangemedianetwork.com/8450/daily-barometer-news/uhds-to-offer-residence-hall-rooms-for-eclipse-festival-attendees/ 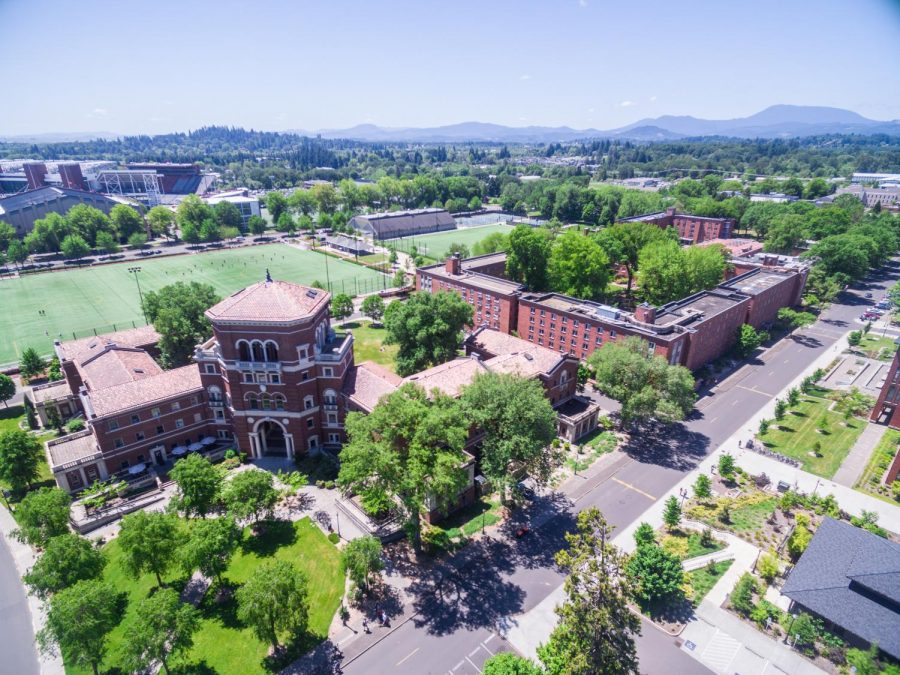 An aerial view of Weatherford Hall and the surrounding area. A summer event, OSU150 Space Grant Festival: A Total Eclipse Experience, will celebrate the total solar eclipse occurring above Corvallis on Aug. 21, 2017. A solar eclipse occurs when the Moon passes between the Earth and the Sun, obscuring the star from view.

Thousands will visit OSU for the once-in-a-lifetime event

The sun hovers over Oregon State University. Students tan, do homework and play sports in the heat. They enjoy the change in weather, with the months of rain and clouds behind them. Soon, they will have a new reason to look up.

There will be a total solar eclipse over Corvallis on Aug. 21, 2017. The OSU150 Space Grant Festival: A Total Eclipse Experience, running from Aug. 19 to Aug. 21, will celebrate the rare astronomical event. The festival is part of a string of events celebrating the 150th anniversary of the university. The event will feature multiple family-friendly educational activities, a concert and a viewing party during the eclipse itself. University Housing and Dining Services will offer rooms to event attendees.

Students on campus during the event can expect OSU to be busier than usual, according to Jill Peters, the eclipse event manager.

UHDS will be offering lodging for visitors in Halsell Hall, Tebeau Hall, the International Living Learning Center and Wilson Hall, according to Dawn Snyder, the assistant director of operations for UHDS.

“If Wilson fills, we will then open up Callahan, McNary and finally Finley,” Snyder said in an email.

According to Snyder, OSU opened residence halls in response to the amount of hopeful festival attendees.

“We thought offering a lodging and dining package would allow more people to attend the OSU150 Space Grant festival and enjoy all that OSU has to offer that weekend,” Snyder said in an email.

UHDS will continue to maintain the usual residence hall policies, according to Snyder.

“We will have staff available 24 hours per day, as we do for all of our guests staying on campus during the summer. We will also have some additional event and security staffing (hired through an OSU vendor),” Snyder said in an email. “Additionally, guests may not possess or consume any alcohol in the halls during the festival.”

Anyone on campus should also be aware of the risks associated with viewing the eclipse, according to Randall Milstein, an astronomy instructor in the College of Science and the Astronomer-in-Residence with the Oregon NASA Space Grant Consortium.

“Do not risk eye damage and blindness by using anything to view the eclipse other than ISO (International Standard Organization) approved eclipse glasses,” Milstein said in an email.

All the activities are free, except for the concert, which will cost attendees $15, according to Peters.

According to Milstein, the eclipse is a rare event.

According to Peters, the event will showcase OSU’s role as the lead institution for the Oregon NASA Space Grant Consortium.

“This event requires a huge collaboration of faculty, staff and students from across the university. The festival program reflects that diversity,” Peters said in an email. “We have exhibits, talks and activities.”

OSU will also play a role in the Learning from the Edge of Space project, a space grant program to livestream the solar eclipse, according to Milstein. More than a thousand students will be launching balloons across the country.

According to Milstein, over 20 space grant programs will have balloon teams participating.

Event attendees may be able to see some of these balloons from campus, as the Alaska team will be launching their balloons from the Peavy Fields, according to Peters.

“(Oregon will be) the first to capture the event by launching a balloon from an OSU research vessel off the West Coast, followed by several other teams launching throughout the state,” Milstein said in an email.

According to Peters, the eclipse may be a once-in-a-lifetime event.

“People who have seen a total eclipse before describe it as a deeply moving, awe-inspiring event that they will never forget,” Peters said in an email.