The Daily Barometer • May 1, 2017 • https://dailybaro.orangemedianetwork.com/8475/daily-barometer-news/asosu-lobby-team-speaks-for-students-in-washington-d-c/ 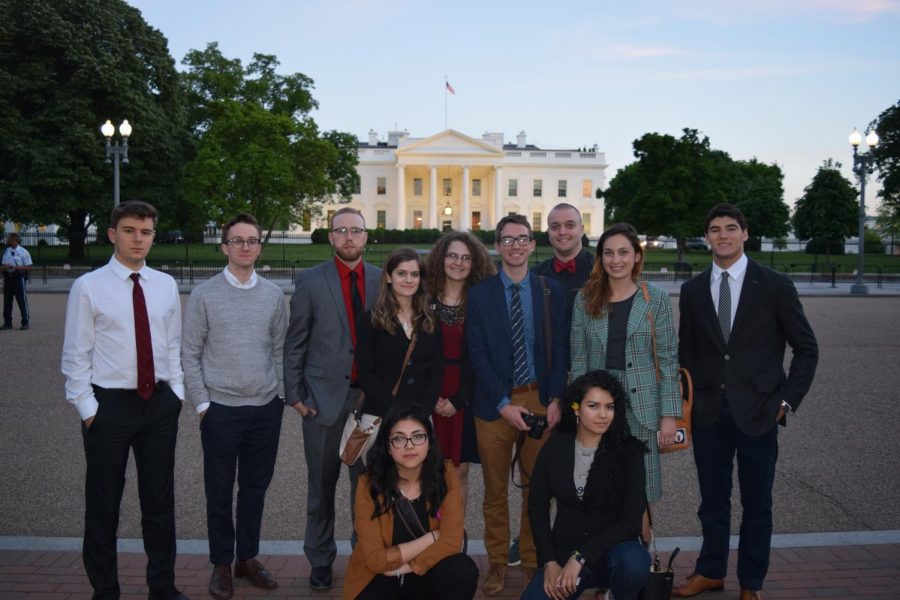 A first generation college student and a daughter of immigrants, if you would have told Isamar Chávez a year ago that she would have the opportunity at the end of her senior year to lobby for students in Washington D.C., she would not have believed you.

Yet, last Wednesday, she found herself standing on the steps of the Lincoln Memorial—the White House, the Washington Monument and the Capitol all within her sight.

Joined by 10 other Oregon State University students, Chávez and the ASOSU Lobby Team traveled from Corvallis to D.C. last week to meet with legislators from Oregon and advocate on behalf of higher education issues.

This year’s trip was organized by senior environmental economics and policy major Jacqueline Logsdon, who also serves as the ASOSU assistant director of government relations. Having been on a lobbying trip last year, Logsdon was able to assemble a team from a pool of over 30 applicants that she felt would accomplish the group’s goals.

“We wanted to find applicants who were eager to gain something from the experience, and were eager to apply it beyond just this trip, looking ahead to the future,” Logsdon said.

After the nine-person lobby team and two student advisers were finalized, the group immediately began preparing for their trip. Weekly meetings starting before spring break allowed the team to discuss the issues and the specific pieces of legislation they would focus on.

Meeting with both U.S. Senators from Oregon and the offices of all five Congressional Districts, the lobby group was able to have their voices heard by all of Oregon’s representatives in D.C. For Chávez, identifying the nuances involved with these conversations was crucial as well.

“It is important to understand the language and the policies and how they affect the communities we all come from,” Chávez said.

The group spent two days meeting with legislators. Using their sub-lobby teams as a way to divide and conquer, the group was able to take in a lot in a little amount of time.

“We picked a very great week to come visit D.C. There is a lot of action. This translates to a very educational experience overall,” Logsdon said.

Logsdon, Ryan Khalife and Luke Bennett met with U.S. Sen. Ron Wyden and U.S. Sen. Jeff Merkley. Merkley introduced his newest legislation on Thursday between meetings with the ASOSU team. The “100 by ‘50 Act” calls for a transition to 100 percent clean and renewable energy by 2050. Sen. Bernie Sanders of Vermont, a co-sponsor of the bill, made an appearance with Merkley in which several students were able to listen to both legislators speak.

“As a leader of Fraternity men statistically more involved in sexual assaults, and being responsible for my members and guests, I want to see more of an effort by the government to implement educational programs for sexual assault,” Lax, the president of Pi Kappa Phi said.

Walden was the only conservative legislator any of the groups met with. Talking about issues pertaining to undocumented students, Walden’s legislative aide mentioned a holistic approach was needed on the topic of immigration. For one of the lobbyists, this was not an ideal response.

“It’s all politics, what does a ‘holistic’ approach mean? We’ll keep fighting, because DREAMers deserve a chance,” León Guerrero said.

“Being able to connect to the legislative aide (through OSU) was helpful in feeling welcome and more comfortable sharing,” Chávez said. She provided Bosworth with her personal narrative around immigration, as well as a letter from another DACA recipient in Oregon.

Bosworth, as an extension of Blumenauer, agreed with much of what the lobbyists had to say and expressed support for their causes. While this is what the team hoped for, some members felt that the conversation needs to go further.

“We either have the economic rational argument (on immigration), or we have the moral one. We need to find a way to navigate and negotiate among those two,” Chávez said. “There is some support and understanding, but we need to do more.”

In addition to lobbying on Capitol Hill, the group was able to spend Friday exploring Washington D.C. For many, this was their first trip to the nation’s capitol.

The group returned to Corvallis on Saturday. Though the meetings have concluded and the team left behind their personal narratives with the legislators, follow up calls and meetings at OSU are next on the agenda.

Chávez hopes to take her experience in D.C. and apply it to her education and community engagement. Logsdon shares similar sentiments.

“Being on this trip gave myself and everyone who joined just a great support group to continue doing this work,” Logsdon said. “It is emotionally taxing but it is so important that we do this work and have students leading the way.”