The Daily Barometer • May 1, 2017 • https://dailybaro.orangemedianetwork.com/8483/daily-barometer-news/osu-professors-study-shows-benefits-of-physical-education-for-adolescents/ 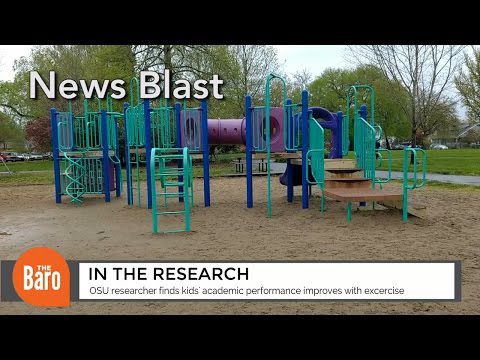 Brad Cardinal, a professor in the kinesiology program at Oregon State University, took part in a research study that found that adolescents with long-term physical education were better informed of how physical activity relates to their health.

The study, published in the American Journal of Health Promotion, was conducted by Drs. Paul Loprinzi of the University of Mississippi, Marita Cardinal of Western Oregon University, Charles Corbin of Arizona State University and Brad Cardinal of Oregon State University.The study observed the physical education and sports participation of 459 adolescents, aged 12 to 15, across the United States.

“One in five adolescents reported no physical education at all, nearly 40 percent of the adolescents in this sample were obese or overweight and only 26.8 percent met the federal government’s physical activity guidelines,” Cardinal said in an email, “Less than 35 percent actually knew what the guidelines were.”

The federal standard for adolescents is 300 minutes of moderate-to-vigorous physical activity a week—that’s 60 minutes a day for five days. Cardinal claims that the more physical education an adolescent receives, the more likely they will know and understand the guidelines.

“Healthy, active children learn better, perform better academically and have fewer behavioral problems in school,” Cardinal said. “(It has the) potential to be a powerful form of preventive medicine.”

Hilaree Knapp, a senior in Human Development and Sciences, is both a student and a mother. Her children, a girl age eight and a boy age six, are both in elementary school. Currently they are required to take P.E. classes and Knapp felt they do meet the federal standard of 60 minutes a day.

“If I take them to the park after school, they are calmer and easier to get to bed,” Knapp said, “At school they get multiple recesses throughout the day to go play. I definitely think it helps them focus in class.”

A law passed in 2007, discussed by Cardinal, was intended to help children receive this physical education.

“In Oregon, 2017 is supposed to represent the final year in a decade-long, statute-mandated ramp-up of physical education in public schools,” Cardinal said, “Specifically, H.B. 3141, passed into law in 2007.”

According to Cardinal, this law requires that elementary students receive 150 minutes of physical activity per week, grades six through eight receive 225 minutes per week and high school students must earn one physical education credit to receive their diploma.

“I believe that physical activity is a basic need of the human organism and that participation in physical activity is a fundamental human right,” Cardinal said, “As such, my research and scholarship seeks to understand the psychosocial and sociocultural factors associated with advancing effective, positive and safe physical activity opportunities for all people, regardless of life stage or social circumstance.”

Knapp stated that P.E. in school is good for adolescents.

“I think it’s good for the kids to learn,” Knapp said, “Make exercise fun. You can dance, throw a ball around with your friends… it doesn’t have to be slaving away at the gym.”

“As a kid, I learned about sports and how to play them. It’s given me a lot of interest in basketball, football and weightlifting,” Huang said. “It’s made my personality more outgoing.”

Growing up, Huang said he had a good physical education that has stuck with him.

“I played basketball, soccer and did running… it’s engaging. In school and out, after-school clubs and summer camps,” Huang said. “In high school, I was getting to know the importance of healthy habits. Right now, I still stay pretty active. When it comes to weightlifting, I try to go four times a week and I play basketball once a week.”

Huang reflected on the benefits from this education to his time at OSU.

“It’s stress management for school work and my social life,” Huang said. “It’s a break to relax, you don’t have to worry about anything else.”

Despite the positive associated benefits, there are obstacles for adolescents receiving physical education.

“The Portland Public Schools, for example, announced in March a planned cutback to 30 minutes of physical education every other week. Not only would that go against the current state mandate, but it would also be of suspect benefit,” Cardinal said.

According to Huang, it is never too late to start your physical education.

“Having physical activity in your life really changes you,” Huang said. “Have a friend to motivate you and commit to it.”