The Daily Barometer • May 7, 2017 • https://dailybaro.orangemedianetwork.com/8490/daily-barometer-news/all-university-sing-a-wildcard-of-fun/

All-University Sing a wildcard of fun 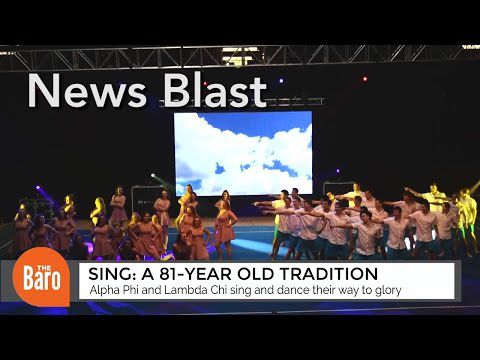 Last Friday night, hundreds of students took to the stage to dance and sing at the annual event, All-University Sing, formerly known as IFC Sing.

This tradition began 81 years ago, and continues to bring students and families together during the Spring Family Weekend performance.

For Nate Cottle, Sing has been central to his Oregon State University experience every year.

“I started out as a participant, and then I coached, and then I was a consultant and now I’m the event production chair,” Cottle said.

As production chair, he coordinated with the production company, Gill Coliseum and security services to ensure the event came together.

“We changed it up a lot this year,” Cottle said.

One of the major changes was the setup of the performances, which used to face the east end of Gill Coliseum, now facing the south end, so it can accommodate a bigger audience.

Another major change this year is reflected in the name change from IFC (Interfraternity Council) Sing to All-University Sing. With this change, the IFC and the Panhellenic Council co-sponsor the event, and other groups on campus outside of Greek life can also prepare a performance and compete.

Preparation for this event begins early winter term, when coaches are elected, and meet as teams to select music. This year, the overarching theme was “Wild Card” or “Mashup,” so groups had much more freedom in choosing their music than in previous years.

Throughout the process, each group has a number of reviews where they receive feedback from the Sing consultants, who have been participants and coaches before. They practice closer to seven hours a week in the final weeks in anticipation of the competition.

“I mean, yes, it’s a competition, but, like, the point of it is to make your friends… You get to bond with people in your pledge class, and then you get to meet guys that are around your age… it’s just a really nice way to meet people,” Albion smiled, remembering her experience of meeting people when she was a freshman.

Luke Finnell, a freshman in Sigma Phi Epsilon, was in a Sing group that partnered with Alpha Chi Omega, which is housed right across the street.

“It’s been a blast,” Finnell said. “I’m excited to put on the show, and show the judges what we got.”

Despite the fun nature of the event, All-University Sing had its challenges along the way.

“I’ve learned a lot about what it takes to put on a big dance,” Finnell said. “It takes a lot of effort and listening and communication.”

Ashton Mills and Emily Doerfler were recognized as outstanding consultants. The entire night was thrilling, with a lively audience wowed by amazing stunts and synced movements.

“I think it’s really about bringing the fraternity and sorority community together, and then also providing a great show for any moms–  I guess, any family members, because now it’s Spring Family Weekend,” Cottle reflected.

The hard work of Cottle, the volunteers, the consultants, the coaches and the performers showed as the night went off without a hitch.