The Daily Barometer • May 15, 2017 • https://dailybaro.orangemedianetwork.com/8492/daily-barometer-news/beaver-athletics-working-group-meets-to-discuss-new-revenue-sources/ 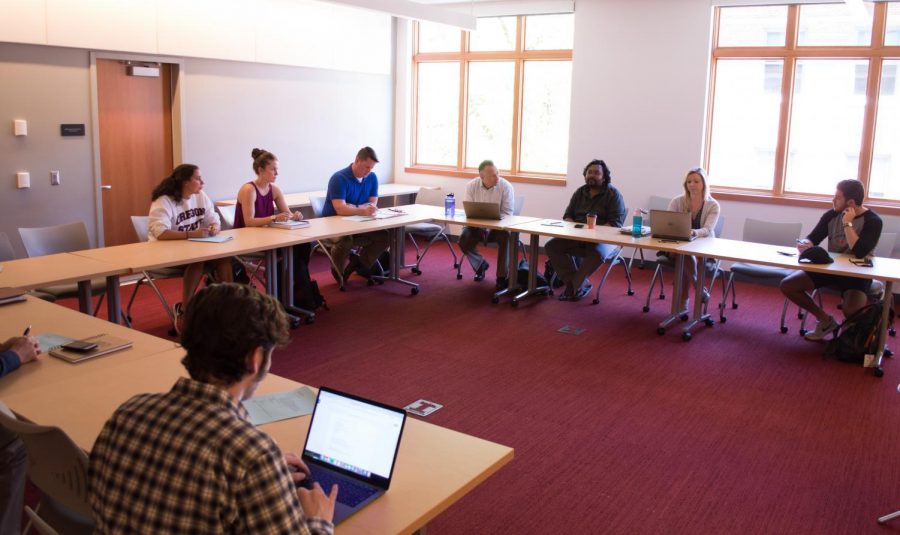 On Monday, May 8, a working group dedicated to finding new ways to fund the athletics student fee met to discuss potential options.

A working group tasked with exploring alternative revenue streams for the Oregon State University Athletics Department met on Monday, May 8, to recap the concerns raised by students and discuss potential replacements for the current system.

The group is made up of both representatives of the Student and Incidental Fees Committee and representatives from Athletics. The body was formed after a March budget crisis in which the ASOSU House and Senate did not approve the athletics budget, triggering a mediation process. For budget proposals to become mandatory student fees, they must be approved by both chambers before they are sent to the ASOSU President, OSU President Ed Ray and the Board of Trustees for their support.

While the athletics fee level of $38.36 per student per term was eventually passed for fiscal year 2018, a promise was agreed upon by the mediation committee to work together to analyze potential ways to fund the program. In the current system, the athletics student fee is used to subsidize student access to athletic events, with all students bearing the cost but not all utilizing the service, according to SIFC Chair Peter Schwartz.

“I do want to keep the thought in everyone’s mind that that is the case for all units that the student fees fund. At least not that I’m aware of, no one uses every single student-fee funded service, but we all pay for them,” Schwartz said.

In the meeting, the working group weighed the positives and negatives of the current system and hypothetical replacements. The values of athletics, and whether or not change in the funding model would retain those values, was also heavily discussed, according to Schwartz.

The athletics fee brings more to students than just tickets to sporting events, according to one of the representatives of athletics, Deputy Athletic Director for External Operations Zack Lassiter.

“Our athletics program provides countless opportunities for all of Beaver Nation to come together and unite around a common goal. Athletic events provide students the opportunity to build relationships and experience lifelong memories together,” Lassiter said via email. “There is so much currently that divides us as a society; we believe athletics provides avenues for students of all races, genders and backgrounds to come together both on the fields of play and in the stands cheering.”

According to MU President and member of the SIFC, Rafid Chowdhury, while athletics is important to the OSU community, the cost to students is also critical.

“Values don’t have costs. You can’t put a monetary value on most values, right? You can’t say ‘Leadership costs five dollars and health costs six dollars,’” Chowdhury said. “What I am looking toward is either reducing the athletic fee, or consider the question, given the values and services from athletics, is it possible to maintain the benefits, but at a reduced cost to students?”

Schwartz, who hopes to act as a facilitator in these proceedings, rather than providing the path forward, the evaluation of this model should take into account data over ideology.

“Once we have come up with actionable outcomes with the various different funding models that we have put together and we are going to send to athletics, hopefully we are able to get more of a quantitative, not qualitative (approach),” Schwartz said. “We are getting to where we can look at numbers—dollars and cents, does this make sense, to change the student fee to work in this model as opposed to this one.”

Detailed usage data from athletics has not yet been provided for this year, according to Chowdhury. Athletics is open to working with student representatives to find a new model that works for the entire OSU community, according to Lassiter.

“We are committed to providing these details to the working group as we work through the process,” Lassiter said in an email.

One of the main ideas discussed in the Monday meeting included an opt-in/opt-out model in which students who plan on attending games pay for a season pass. Chowdhury himself is pushing for a partially subsidized model.

“That would reflect the current model, but still would lead us toward change,” Chowdhury said. “We still pay an athletic fee, but for certain games we would have to pay an additional amount to pick up the tickets, and that is more reflective of even student groups putting on events.”

According to Chowdhury, he has had difficulties trying to ensure the decision-making process accounts for the entire student body.

“After the meeting I thought, not only was I the only student voice, but I was also the person of color going against a bunch of white people, if you consider identities,” Chowdhury said.

Another difficulty Chowdhury has encountered is the tendency in universities to resist change.

“This is something I have faced in higher education as well, everything moves at a snail pace—very slow. Even the things that we are considering this year will not get decided until next year, and would not impact students until 2019,” Chowdhury said.

“But if we wanted to make drastic change, then everybody loses their minds, because then drastic changes pushes everything into turmoil they are not comfortable with, which is understandable. It’s a very big organization, it impacts a lot of lives. But at the same time, is it fair to the current students who are paying, if we know that we should be changing the current criteria?” Chowdhury added.

According to Schwartz, in the last two years the SIFC has been in ‘survival mode,’ unable to appoint a full committee on time, making it difficult to focus on the process of increasing student involvement.

“That has been something I’ve hoped to incorporate with the entire process, not just this, but next year when we are doing budget presentations or deliberation or joint session or our open hearing,” Schwartz said. “We are looking to get the most accurate representation possible, but also we are definitely looking at different ways to incorporate a large quantity of student responses and input, because I think we can all agree that having a small group of people making decisions with wide-reaching impacts is never a good thing.”