Shelby Weeks ‘Plays For A Reason’ 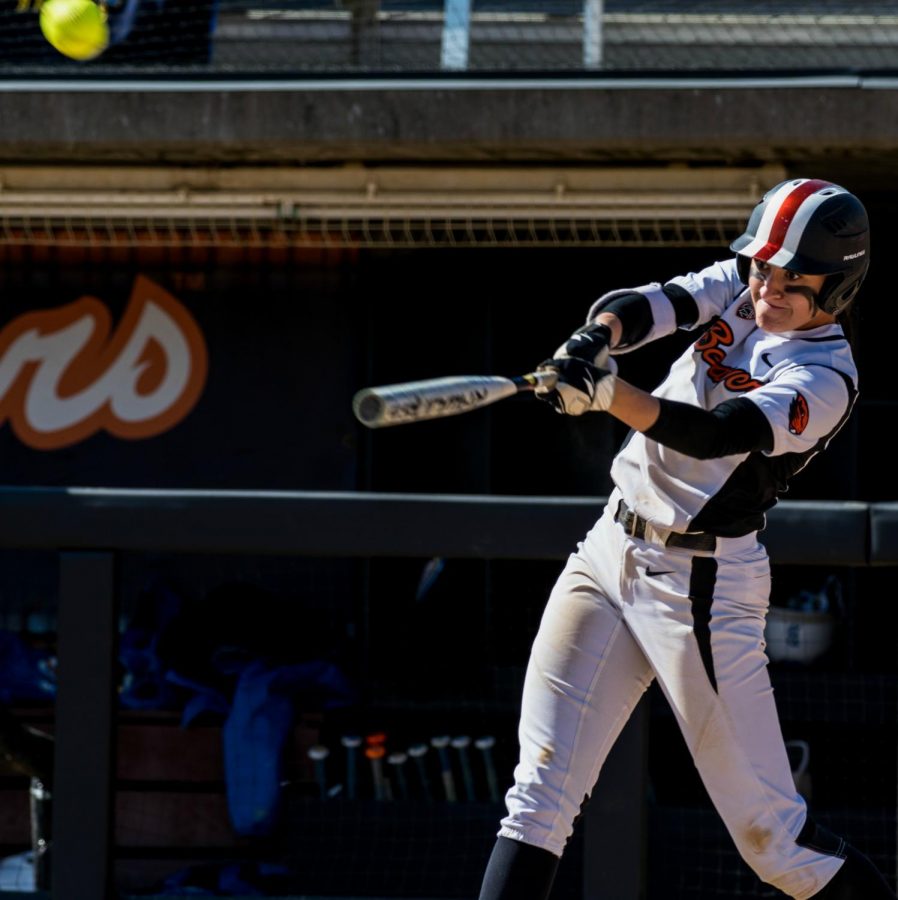 Softball player Shelby Weeks hits the ball. Weeks wears a wristband to honor her father, who lost his battle with cancer.

Every time Oregon State outfielder Shelby Weeks steps onto the field, she Plays For a Reason.

Shelby wears a blue wristband that says “Mike Weeks II-V-XIV, Play For A Reason” on her left wrist. The wristband represents her late father, Mike Weeks, who lost his battle to colon cancer Feb. 5, 2014.

“He lasted three years with colon cancer,” Weeks said. “He ended up having liver and lung cancer. It spread.”

The year following the loss of her father was one of the hardest of Shelby’s life.

“Whenever I stepped onto the field then, it turned my sadness into happiness,” Weeks said. “Being able to play for someone who had cancer and for all those who have cancer and are surviving it and living with it is something special.”

Weeks got her start in softball with her dad.

“My first time playing catch ever was with him,” Weeks said. “I started when I was eight. It’s something we grew up doing. With him, it was our journey. It’s great now to continue my journey.”

Before Mike lost his battle with cancer, he got to see Shelby verbally commit to Oregon State her sophomore year of high school.

“His goals were so high for me,” Weeks said. “Now being able to go out there and reach them is something great and something I get to experience and he’s watching over me.”

Mike had a chance to meet the coaching staff at Oregon State and felt comfortable with her decision to commit.

“He was excited for my future,” Weeks said. “He of course wanted to watch me play here.”

Weeks knows how hard it is to go through the battle of cancer with a loved one and has respect for everyone who experiences it.

This weekend, the Oregon State softball team will play against Stanford in their Dam Cancer Series.

“Being able to play for them is something great,” Weeks said. “It touches my heart to know that people are out there supporting cancer and know that the support system with cancer is something special.”

While Shelby is looking forward to honoring breast cancer survivors, she hopes to represent all other cancers this weekend as well.

“I feel like (Dam Cancer) is a good representation of cancer but other cancers should be represented the same way,” Weeks said. “Leukemia, bladder, colon, lung and brain cancer. All those cancers are just as important as breast cancer but I feel like we just put breast cancer out there more because it’s pink and everybody knows it’s cancer when it’s pink.”

Cheryl Weeks, Shelby’s mother, will be in town for the Dam Cancer series. Shelby is excited to experience the special weekend with her mother.

When Weeks takes the field Friday, her teammates will be honoring cancer survivors. She plans to send a prayer out to her dad, but she’ll play as she always does – for a reason.

First pitch is set for 3 p.m. on Friday, April 21, at the OSU Softball Complex.