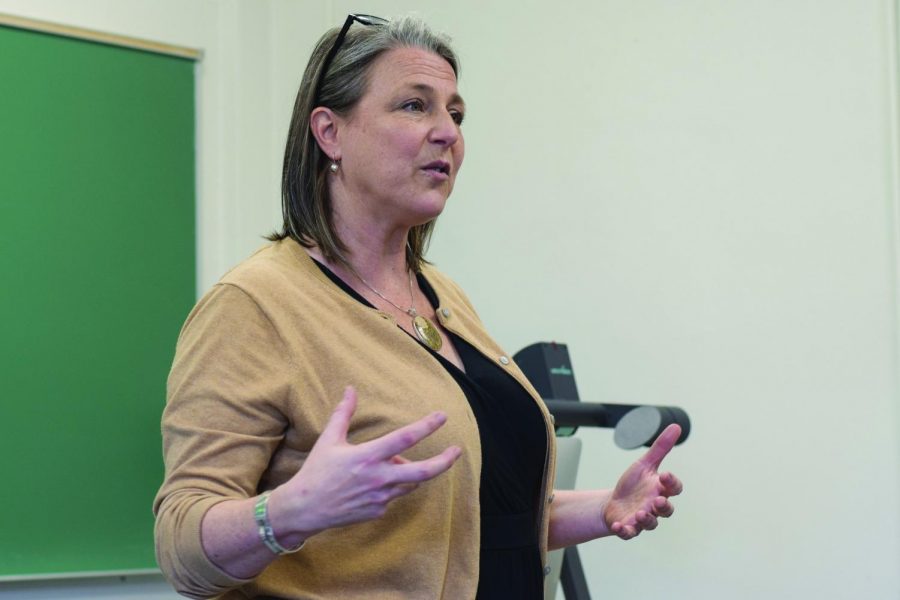 Amy Koehlinger, interim director of the School of History, Religion and Philosophy, is leading the collaboration of Critical Citizenship, which was introduced as the beginning of spring term.

Over the past year, protests have become prevalent throughout campus. The nation’s political climate has created a general feeling of unrest for some, and many students are looking for ways to get involved.

This class is a collaboration of the departments of the School of History, Philosophy and Religion and is taught by ten faculty members, with ten topics connected to their individual specialties.

The Critical Citizenship course will be led by Amy Koehlinger, an OSU associate professor of religious studies and the interim director of the SHPR. According to Koehlinger, the professors in the SHPR have been looking for a community teaching outlet.

“The School of History, Philosophy and Religion together have thought about how to respond to current events,” Koehlinger said. “There was this feeling among our colleagues that we wanted to do more team teaching and this seemed like an interesting idea for doing it.”

According to the course syllabus, Christopher Nichols will discuss ‘Critical Approaches to Citizenship.’ Sharyn Clough’s topic is ‘Phronesis: Citizens Practicing Peace.’ Courtney Campbell will talk about ‘The Religious Roots of Civil Disobedience.’ Robert Figueroa will discuss ‘Environmental Justice and Climate Change.’ Marisa Chappell’s topic is ‘Black Lives Matter in Historical Context.’ Kara Ritzheimer’s lecture is ‘Refugees, Right-Wing Politics, and the Future of Europe.’ Mina Carson will discuss ‘Queering Politics: LGBTQ Issues.’ Linda Richards’ topic will be ‘Citizenship in a Nuclear Age.’ Paul Kopperman will talk about ‘Swords or Ploughshares? Positive Signs and Downers in the Search for Peace’ and Barbara Muraca’s lecture will be on ‘Economic Democracy and the End of Growth.’

Muraca is an assistant professor in the philosophy department and her subfield is social and environmental philosophy. According to Muraca, the series of lectures is intended to provide students with diverse perspectives.

“Faculty from History, Philosophy and Religion will offer their expertise in a series of lectures and engage with students and their questions. We want to offer students a diversified, critical and interdisciplinary perspective on contemporary issues,” Muraca said via email.

According to Chappell, an associate professor in the history department at OSU, the inspiration for this course was a series of flash panels. The panels are something the SHPR often puts on throughout the year. They choose contemporary topics and gather experts for public talks at OSU.

“We did one just after Trump’s first executive orders on immigration, ‘Walls, Bans, and Borders: Trump’s Immigration Agenda,’” Chappell said in an email. “Several of us sat down to try to sketch out upcoming panels and came up with the idea of a class.”

Chappell is one of the collaborators of this new course and will be lecturing specifically on the Black Lives Matter political movement.

“I feel a responsibility as a faculty member—as somebody who has the distinct privilege of spending my working life researching, writing and teaching about the history of inequality, political struggle and social movements—to serve students (and the community more broadly) by sharing what I learn in my research and providing tools for deep thinking and critical engagement with contemporary problems,” Chappell said via email.

Figueroa is an associate professor of philosophy at OSU who specializes in environmental ethics. According to Figueroa, the course was a response to the current political climate in the U.S.

“The collaboration started as a response to concerns immediately arising from the presidential campaign leading up to Nov. 8 election, and the rise of overt xenophobia, racism, sexism, ableism and climate change denial,” Figueroa said in an email. “I observed campuses across the country finding ways to provide students the opportunity to think through and collectively exchange ideas and experiences in the face of many challenges to social and environmental justice.”

According to Kopperman, a history professor at OSU, lectures like the one he is providing are necessary because addressing social problems such as war are extremely complicated.

“If the answer to war were simple and obvious, there would be no need to lecture on it. Unfortunately, that isn’t the case,” Kopperman said.

According to Figueroa, he is passionate about the work he does and is excited about this new course. He wants to help students think deeply about what their citizenship entails and the problems we all face with the issue of climate change.

“My intent is to get students to think about the environmental heritage and future generations in climate change narratives, and to philosophically address the issues of justice,” Figueroa said.

According to Koehlinger, more teachers wanted to be part of this collaboration than there were weeks available for them to present.

“We had more people that wanted to teach than, we only had ten weeks, so this was actually a problem,” Koehlinger said. “It was mostly word of mouth and then first come first served, if you wanted to jump in, jump in, and in the end there were people that were like, ‘Ahh, I would’ve loved to.’”

Koehlinger said the enrollment of students in the course was higher than expected, and in the end the faculty decided not to cap the class and just see how much interest they could stir up for Critical Citizenship.

“We hit the cap, and we needed to move rooms, and there was a brief conversation about how big do we want to let the course get, we thought ‘Well, (it’s) the first year, let’s just see,’” Koehlinger said.

According to Koehlinger, in the future this course to might qualify as a Baccalaureate Core option for any student.

“I think we will definitely do it again, we are trying to figure out whether or not we want to keep it this informal, just a two credit special topics,” Koehlinger said. “There is a potential to give it Bacc Core contemporary global issues CGI status, and that way it would count for Bacc Core and then we would have to decide whether we want to take it up to a 4 credit course.”

According to Koehlinger, SHPR professors are also looking to redetermine their role with students.

“Professors are trying to figure out what it means to be an expert in something in a moment, in a very complicated political moment,” Koehlinger said.