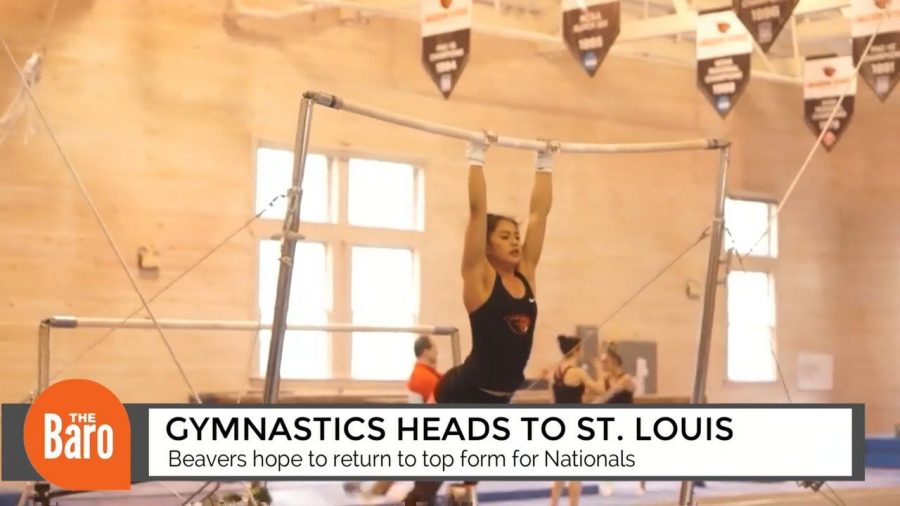 The Oregon State gymnastics team is flying off to St. Louis, Missouri at 3 a.m. this Wednesday morning to compete in the NCAA Championships taking place this Friday.

Junior Dani Dessaints got her first nationals experience as a freshman in Fort Worth, Texas. There, she competed on vault and uneven bars replacing the injured Kaytianna McMillan.

Dessaints did not feel the pressure in her last nationals appearance, and went into her performances without high expectations. Dessaints just wanted to have fun.

She did more than that, the then freshman contributed to the team’s overall score in both events and was the top performing Beaver on vault.

“It was really exciting and I’m glad I could actually contribute to the two events that I did do,” Dessaints said. “With beam, that’s going to be something new, since I haven’t competed beam yet (at nationals), so that will be fun.”

At regionals, the Beavers eliminated Iowa, outscoring them by a tenth of a point. The team took second with an overall score of 196.150. The scare at regionals reminded the team to not get too ahead of themselves, according to senior Madeline Gardiner.

Friday will be the fourth time Gardiner has performed at a national tournament. In 2014, she scored 9.8875 on beam, and placed third overall. In 2015, Gardiner again placed third on beam, scoring 9.925.

In her 20th season as head coach, Tanya Chaplin and her husband and associate head coach, Michael Chaplin, have been to nationals more times than they can keep track of.

“They’re all great,” Michael said. “Anytime you go to nationals it’s a great experience because you know you’re there with the top twelve teams in the country.”

Michael and Brian Amato were honored as the West Region Assistant Coaches of the year by the National Association of Collegiate Gymnastics Coaches/Women.

The coaches are not the only ones receiving accolades, the gymnasts’ themselves have garnered a healthy share of awards.

McMillan earned second team All-American honors in both on the floor and in the all-around, along with being named Pac-12 gymnast of the year.

Gardiner was a first team selection for the beam, making her a five-time All-American. She also earned the Pac-12 Scholar-Athlete award.

For the first time Dessaints earned All-American honors as she was placed on the second team on the vault.

Redshirt senior Erika Aufiero gathered her second career All-American honor, being placed on the second team for the uneven bars.

All 11 of the eligible gymnasts at OSU recieved Pac-12 All-Academic accolades.

“It’s rewarding for me just to see them accomplish those things because, as coaches, (we) know they can do it, if they focus in the right way,” Tanya said. “And they’ve done that.”